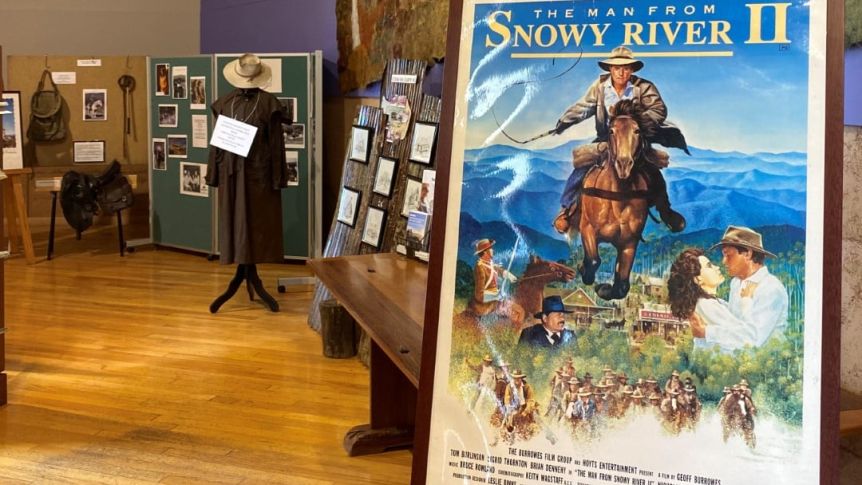 Locals are contributing from their own memorabilia for the exhibition at the Mansfield Visitor Centre. Photo: ABC Goulburn Murray

Four decades since The Man from Snowy River began filming in north-east Victoria, the town at the heart of it all is giving fans the chance to revisit the iconic movie.

From composer Bruce Rowland’s original score to the saddles used by Tom Burlinson and Sigrid Thornton across Victoria’s High Country, a range of pieces have gone on display in a new exhibition in Mansfield celebrating the film’s anniversary.

Ann Ware from the Mansfield Historical Society said the movie captured the hearts of people right across the world, and expects the exhibition will create a feeling a nostalgia for many.

“People couldn’t believe how popular it was. I think it just resonated with people, the beauty of the whole area,” Ms Ware said.

“There are some of the old posters that were put out at the release of the film at the time, just lots of bits and pieces – the saddles, including an old side saddle that was not used in the film.

“But we believe Sigrid rode it side saddle for a photo shoot at one stage.”

Putting Mansfield on the map

When filming began in 1982, Mansfield was a little town, but that soon changed.

“Mansfield sparked alive. It was something that really put Mansfield on the map, especially Merrijig and the hills around there,” she said.

Some parts still attract tourists today, including Craig’s Hut which was purpose built for the film.

“They decided that was the ideal spot for a hut for the film, so they built an original style hut there,” she said.

“The hut would never have been built without The Man from Snowy River.

“And, of course, each time there has been a bushfire come through and it’s been burnt then it has been rebuilt – because it just remains popular.”

The film has attracted international visitors for many years.

“Even Americans who love it, they have to see the whole lot. All the settings,” she said.

The exhibition is being held at the Mansfield Visitor Centre, and while there are already countless pieces on display, Ms Ware said she expected it to continue to grow with locals contributing from their own collections.

“It’s up and running already. There will probably be additions made to it because people see it and say “Oh I’ve still got a little bit of this and that”, and another bit comes in,” she said.