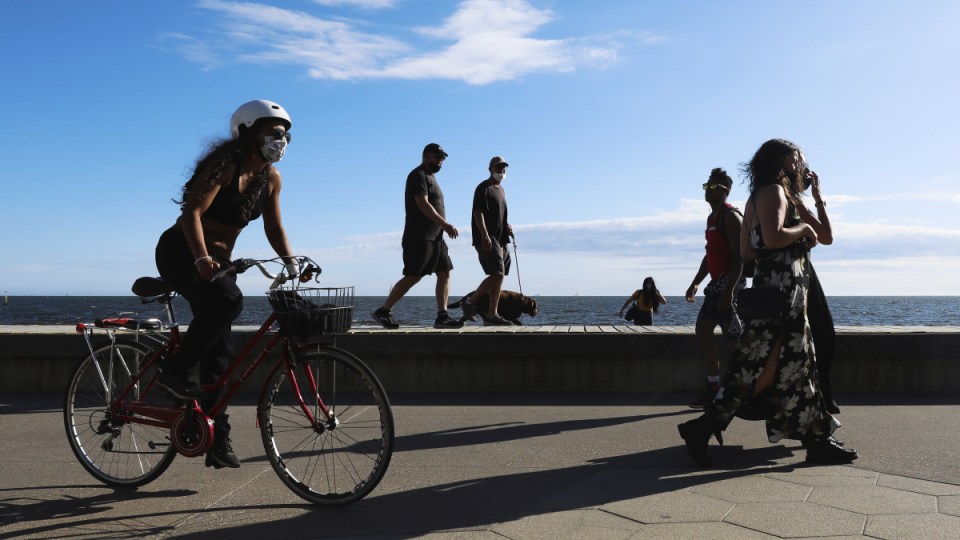 Melbourne residents are enjoying their first weekend of relaxed restrictions since the lockdown was relaxed. Photo: AAP

Victoria has recorded just one new coronavirus case overnight and no further deaths. There are two mystery cases.

The 14-day rolling average in Melbourne has dropped to 2.4 and two mystery cases remain. In regional Victoria the average remains at zero.

Health Minister Martin Foley will present the rest of the day’s numbers at the daily briefing, as Premier Daniel Andrews enjoys his first day off after a consecutive run of 120 daily press conferences.

The latest numbers come as Melbourne residents enjoy a weekend of greater social freedom after many lockdown restrictions were lifted earlier in the week.

Families can visit each other at home, but only one household can visit another household per day.

The 25km travel limit remains in place and outdoor gatherings are still capped at 10 people, though there is no limit on the number of households involved.

Data collected during the week showed foot traffic through Melbourne’s CBD was three times higher on Wednesday than it has been during the city’s lockdown.

It will be an emotional weekend for many people who have been unable to see loved ones for months.

However, Mr Andrews on Friday pleaded for caution.

“I know that is challenging but if we want to keep doing that and not be locked down again and unable to see the people that we love, we just have to keep vigilant,” he said.

“We have to be, as a community, as stubborn as this virus. These last few months have to mean something, they have to be worth something.”

Victoria’s two coronavirus cases under investigation include someone who had the virus in the past but is likely no longer infectious.

The risk of a third wave in the state was minimal but would not be zero until a vaccine was produced, he said.