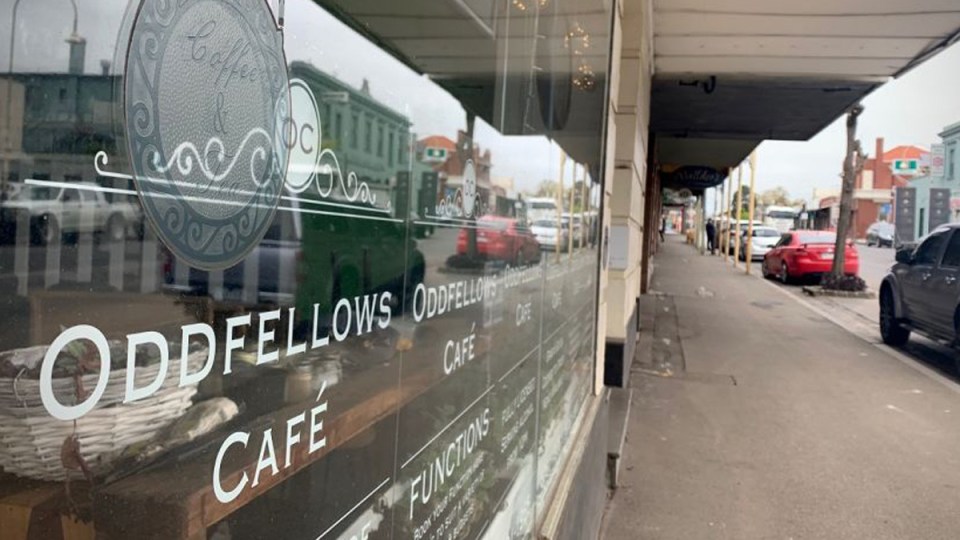 The truck driver dined at the Oddfellows Cafe in Kilmore, sparking an outbreak in the town. Photo: ABC

A preschooler is among three new coronavirus cases confirmed in Victoria on Thursday.

The young girl is linked to the cluster in Melbourne’s northern suburbs, and attended the Good Start Early Learning Centre while infectious.

Professor Ewan Wallace from Monash Health said extensive testing was underway of about 90 close and secondary contacts of the child. They included other children and staff of the childcare centre.

Testing has been boosted in the area.

Premier Daniel Andrews said the other cases confirmed on Thursday were under investigation as potential shedding of the virus from previous infections. Both patients are linked to the northern suburban outbreak and are already in quarantine.

The rolling 14-day average to October 28 in metropolitan Melbourne fell to 2.4 on Thursday, from 2.7 on Wednesday. In regional Victoria, it is zero.

The number of “mystery cases” or cases with an unknown source to October 26 is four, an increase of one.

Two new cases were reported on Wednesday after two days of zero cases.

The Melbourne truck driver responsible for spreading coronavirus from a suburban cluster to two country Victorian towns has been fined $1652.

Victoria Police Chief Commissioner Shane Patton has confirmed the fine, saying detectives had investigated after a referral from the Department of Health and Human Services.

While the driver was fined for dining at a Kilmore cafe, he was not penalised for initially failing to tell investigators he had also driven to Shepparton.

Mr Patton told Melbourne radio 3AW police had decided a fine was the “most appropriate” penalty for breaching health directions.

“He was interviewed, he was remorseful I’m told,” Mr Patton said.

The driver had a work permit to travel outside Melbourne in late September.

He became infected after picking up the virus from The Butcher Club cluster at Chadstone shopping centre, but it was not picked up before his trip.

The man breached guidelines by dining in the Kilmore cafe, rather than ordering takeaway.

He then failed to tell health authorities he had also driven on to Shepparton after visiting Kilmore and Benalla.

Three people were infected in Shepparton, sparking a community testing blitz, but there have been no more infections since.

Elsewhere, the final report of Victoria’s COVID-19 hotel inquiry has been delayed until December 21. The board of inquiry said it was still waiting on documents requested during an extraordinary sitting last week.

The inquiry, led by former judge Jennifer Coate, will deliver an interim report on November 6. It will include recommendations for a proposed quarantine program.

Mr Andrews said the delay was unlikely to push out the date for Victoria resuming taking international arrivals.

“We should be able to hit the agreed target we agreed to at national cabinet and it is to have flights returning, people reunited with their families for Christmas,” he said.

“That is exactly what we want to work towards.”