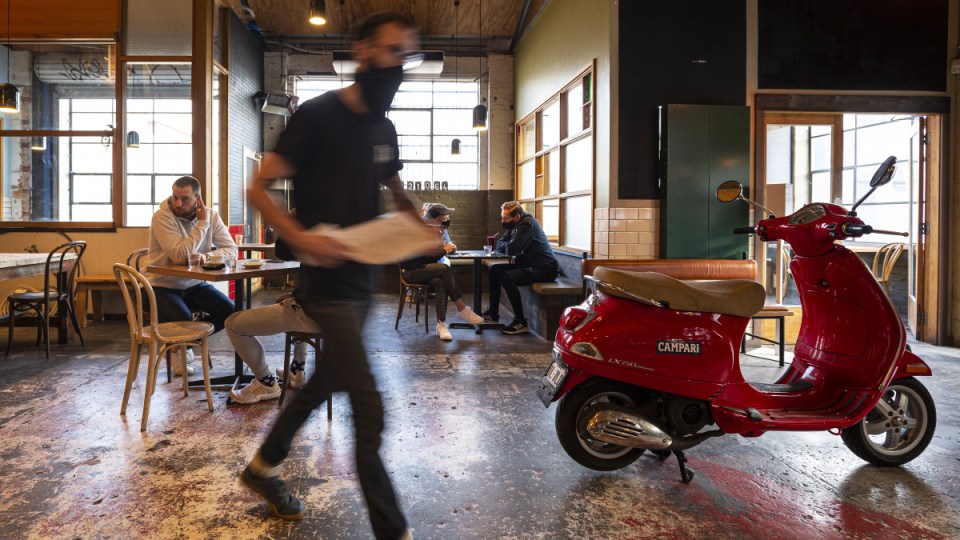 Sit-down dining is back on the agenda in Melbourne, as COVID rules are relaxed. Photo: Getty

Victorians enjoying their first taste of renewed freedoms such as shopping and dining in have had a sharp reminder that their fight against COVID is not done, with two more cases and two more deaths on Wednesday.

Both of the new infections are in close contacts of other cases. The latest patients were already in quarantine when diagnosed and posed no risk to public health, Premier Daniel Andrews said.

“Today is a positive day. To have just two more cases and have them contained … that means the system is working very well,” he said.

“There will be cases and outbreaks, but we will be able to live with this and keep it safe, and keep the place open. That is our aim.”

Mr Andrews said they were men in their 70s and 80s who died some weeks ago. Both were linked to aged-care outbreaks.

Melbourne’s key 14-day average of new cases fell to 2.7 on Wednesday, while the city has had only three mystery cases in the past fortnight.

Outside Melbourne, Victoria has a 14-day average of zero and no mystery cases. There are also no longer any active COVID infections in regional areas.

Wednesday’s reality check came after some eager Melburnians queued late into Tuesday to be the first through the doors of their favourite restaurants and pubs, to coincide with virus restrictions easing at 11.59pm.

Hospitality workers had rushed to make preparations on Tuesday after Mr Andrews announced venues would be able to host up to 50 people outdoors and 20 indoors.

“That is about 180,000 workers who can return to work on site, an achievement that every single Victorian should be proud of,” he said on Wednesday.

“Many Melburnians want to get out and support local businesses and I want to remind everyone that the rules still apply and the rules are not against you, they are for you. They are so you can continue to do these things.”

City residents wasted no time “getting on the beers”.

Angus & Bon in Melbourne’s south-east was one of the first restaurants to welcome back customers, serving patrons at the stroke of midnight.

Owner Liam Ganley said he felt a “massive relief” after opening his doors to a queue of “very excited” customers.

“The atmosphere was electric. People were dying to get back on the beer,” he told The New Daily.

There were also reports of people flocking to indulge in retail therapy, particularly at suburban Kmarts.

For Victorians in regional areas, Wednesday marks the first time they can hit the gym in months.

The government has advised that masks should be worn inside gyms for most activities apart from running on a treadmill.

Masks also remain mandatory in other areas of Victoria. Mr Andrews has signalled they are likely to be a part of Victorians’ lives into 2021.

Federal MPs across the political divide have praised the efforts of Victorians, especially the millions of Melbourne residents who endured a 15-week lockdown.

Victorian-based Labor deputy leader Richard Marles said there was a “renewed sense of confidence, of hope and optimism” in the state ahead of further lifting of restrictions in coming weeks.

While mistakes had been made, and were being addressed, the health response had been much better than other nations, he said.

Treasurer Josh Frydenberg said his fellow Victorians had been “magnificent” and the federal government would continue to support them as the pandemic continued.

However, at the start of parliamentary Question Time on Tuesday, Mr Frydenberg fired up at the failures in Victoria’s response to the pandemic.

“The pain, the cost, the loss of Victorian people – it never should have come to this,” he said.

“There are so many Victorians who will carry the scars of this lockdown for years to come.”

He wants Australians to enter the coming Christmas season “with positivity, with hope, with aspiration, looking forward to what they are going to do”.