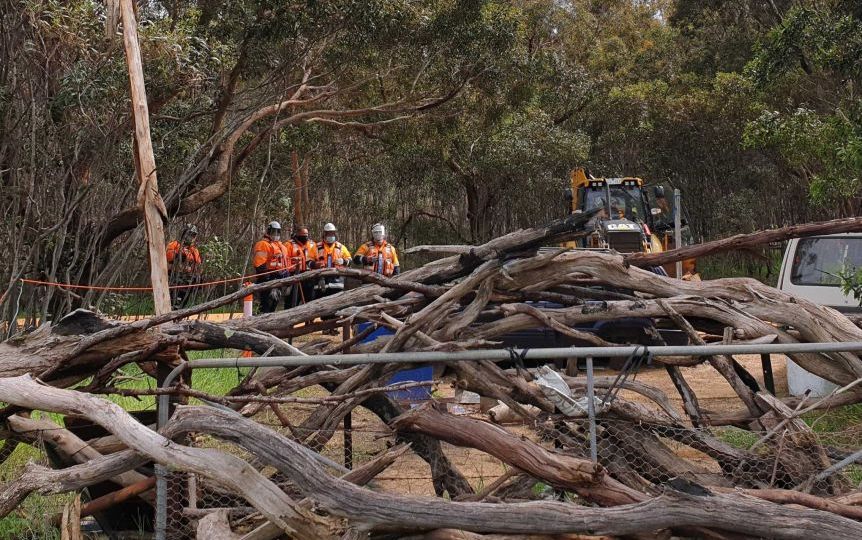 Police have arrested 25 protesters at a controversial highway upgrade site in western Victoria, after emotions ran high amid claims a culturally significant “Directions Tree” had been felled.

It is unknown at this stage if any charges have been laid, or if those arrested are in custody.

In a statement, Victoria Police said camps and protesters were removed from restricted areas to enable highway construction work to continue, with “a small group of protesters remaining, with ongoing negotiations taking place for them to leave the restricted area”.

Tension between protesters and police intensified on Monday as police blocked entrances to a site where a large fiddleback tree was felled.

A member of the Djab Wurrung embassy, Zellanach Djab Mara, said the tree was a culturally significant “Directions Tree”.

“It has placenta buried with the seed, from ancestors,” he said.

However, Victoria’s Minister for Transport Infrastructure, Jacinta Allan, said no trees had been, or would be, removed as a part of the Western Highway upgrade without the consent of the representatives of the 12 families that make up the Djab Wurrung people. 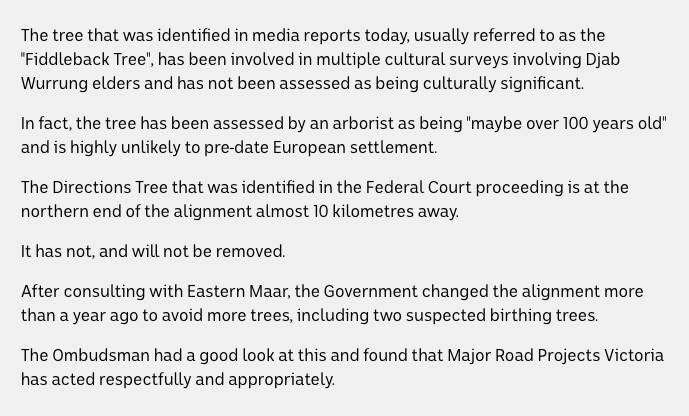 Numerous legal battles have been waged over the alignment of the highway upgrade and, in particular, the stretch between Buangor and Ararat.

Earlier this year, the federal government rejected an application to protect trees along the route for a second time.

Federal Environment Minister Sussan Ley was required to reconsider the initial decision after a Federal Court ruling in December found a “legal error” in the assessment.

In a letter to the group’s lawyer in August, Ms Ley said she had again decided against the protection order.

Lawyer Michael Kennedy, who has represented the landholders in the area and the protesters in a number of legal stoushes at a state and federal level, said he had been expecting work to begin on the site.

The tree felled on Monday was culturally significant, he said.

“It relied on information provided by at least two traditional owners, one of whom is my client in the Federal Court case, Sandra Onus.

“To say it’s not the Directions Tree is a lie.

“This tree is one of the most magnificent trees one could see.

“It’s regarded as a spiritual tree and for them just to destroy it … it’s just scandalous.”

Victorian Premier Daniel Andrews said his government had deeply engaged with traditional owners about the upgrade.

“As I understand it, there’s been legal action,” he said.

“There had been agreements and settlements reached. There has been direct consultation with the 12 families who essentially comprised that traditional owner group.

“And we have done as we said we would do.

“This is a dangerous road. It needs to be built. We promised we would. We have been respectful. We’ve engaged. And we’ve been true to the spirit of the agreements that had been entered into.

“But this is a very dangerous road. There are many people who have lost their lives on this road, and I’m determined to get this road upgraded.”

The Premier said that under the consultations, significant changes were made to its design.

Earlier, police said camps and protesters were removed from restricted areas on Tuesday to allow work on the highway upgrade to continue between Buangor and Ararat.

“General duties police are being supported by units from the Highway Patrol and specialist support units to ensure the safety of all people in the area,” a police statement said.

Victoria Police said the Western Highway was closed between Ararat and Ballarat.