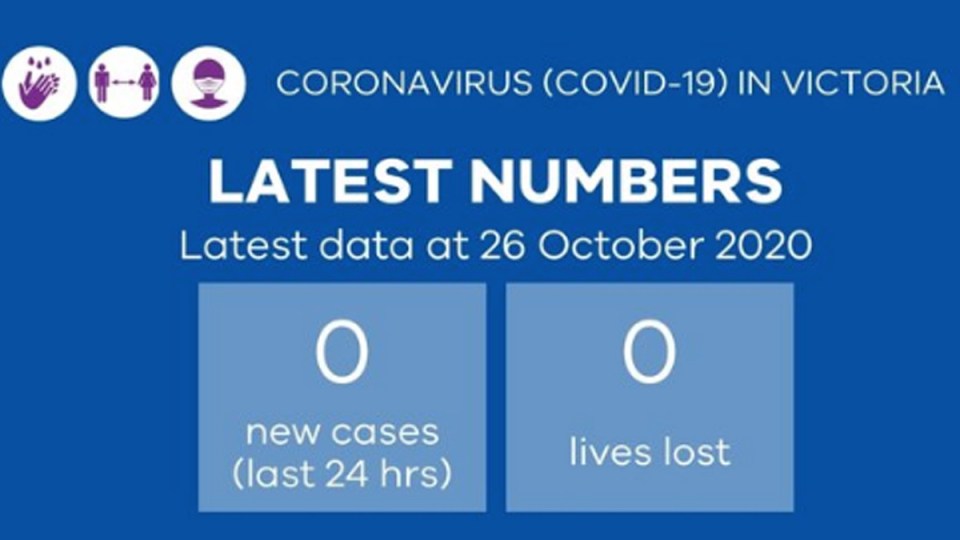 After months COVID cases, and hundreds of deaths, Victoria finally achieved a day without new infections on Monday. Photo: Twitter

Victoria has its first day without coronavirus cases in more than four months as five million locked-down Melburnians anxiously await the outcome of a testing blitz across the city’s north.

Monday’s confirmation of no new cases – the first day since June 9 the state has reported no additional infections – came after thousands of people were tested across Melbourne’s north at the weekend.

It also followed Victorian Premier Daniel Andrews controversially backtracking on a pledge to announce “significant” changes to the city’s virus rules on Sunday.

Instead, as a worrying cluster spread across Melbourne’s north – reaching 39 infections across 11 households – he opted for a “cautious pause” to await the results of more than 1000 key tests from the region.

Late on Sunday, Department of Health and Human Services testing chief Jeroen Weimar confirmed no additional cases linked to the northern metropolitan outbreak had been detected among the 1135 test results.

He said nearly 15,000 people had been tested across the suburbs since last Tuesday. There were no new cases in the northern cluster on Monday.

“This is one of the best outcomes we could hope to see, but the only reason we’re able to see it is because such a large number of people across the northern suburbs have taken the time since this outbreak was first identified to get tested,” Mr Weimar said.

“We have results for the 2100 people who got tested [on Sunday] and there are hundreds more samples going through the labs over the course of the day. Their commitment is a massive contribution to identifying what we hope are the very few remaining cases of COVID19 in Melbourne.

“Testing continued into the evening last night and we expect to see those results come through today. Testing in these five communities will continue to be a focus.”

Mr Andrews acknowledged Melburnians would be frustrated by the delay of up to 48 hours in announcing rule changes. He said he still hoped to unveil rule changes for the city by Tuesday.

Melbourne’s two-week rolling case average fell to 4.6 on Sunday, and was down to 3.6 on Monday – well below the threshold of five that authorities had previously coveted to trigger the next step.

However, mystery cases are yet to reach their target of five in the preceding fortnight. Monday’s figure was seven.

Mr Andrews has copped criticism from all sides after Sunday’s announcement. Former state health minister Jenny Mikakos was among the first, calling the delay “unnecessary” after the the city hit the five-case benchmark, and labelling it evidence of “paralysis in decision-making”.

Mr Andrews would not be drawn on her comments, but chief health officer Brett Sutton noted she and other detractors were not “in the tent”.

The trio said the decision to keep businesses closed suggested the Victorian government did not have “sufficient confidence” in its contact tracing system to manage future outbreaks.

“Victoria’s public health systems are either up to the task of dealing with future outbreaks or they are not,” the federal trio said in a joint statement.

“This is a profound disappointment.”

Business leaders and Melbourne’s Lord Mayor, Sally Capp, have also weighed in with criticism of the Premier’s decision.

There was some good news for regional Victoria, however, with restrictions to be wound back for some businesses and activities from 11.59pm on Tuesday.

Meanwhile, the Victoria Racing Club announced that no crowds would be allowed during the Melbourne Cup Carnival amid ongoing restrictions. It remains in talks with the government to host small numbers of owners at Flemington.

Melbourne’s day of zero infections after pause to virus easing