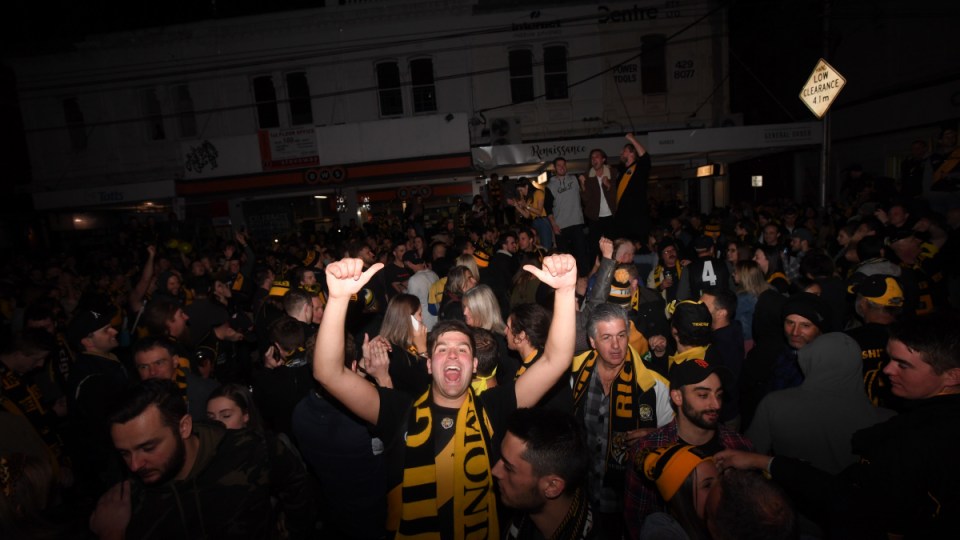 Victoria Police will take to the sky as they look to catch out people doing the wrong thing on AFL grand final day.

To ensure Melburnians adhere to the rules on Saturday, police have confirmed they will be deploying drones to monitor crowds at parks, beaches and other popular spots.

Victoria Police Assistant Commissioner Luke Cornelius has warned there will be crackdowns on any gatherings through the day that breach coronavirus guidelines.

He said that police will use drones to keep an eye on any gatherings, to monitor numbers and behaviour .

“Our drones won’t be hovering over people’s pizza ovens in their back yards,” Mr Cornelius told 3AW.

There are concerns that Richmond or Geelong fans will disregard health guidelines about crowd sizes throughout Saturday, particularly late in the evening after the final siren.

Richmond’s Swan St was a focal point for Richmond celebrations after the 2017 and ’19 premierships.

“I’d make this point – Swan St is closed, there are no pubs and clubs open this year,” Mr Cornelius said..

“Certainly we’ll be keeping an eye on things in Swan St, but also down in ‘G Town’.

“”We’ll be making sure … that if people go mobile, out and about, they’re doing so in keeping with the CHO directions.

“We’ll certainly be paying attention to that.”

He added that any illegal gatherings in homes would also attract police attention.

“If we do receive calls from members of the community about large gatherings in people’s homes, we will certainly looking to respond those calls as well,” he said.

Mr Cornelius said the advice from advice from health authorities is that the risk of transmission among people having a party at home is 20 times greater than any other community setting.