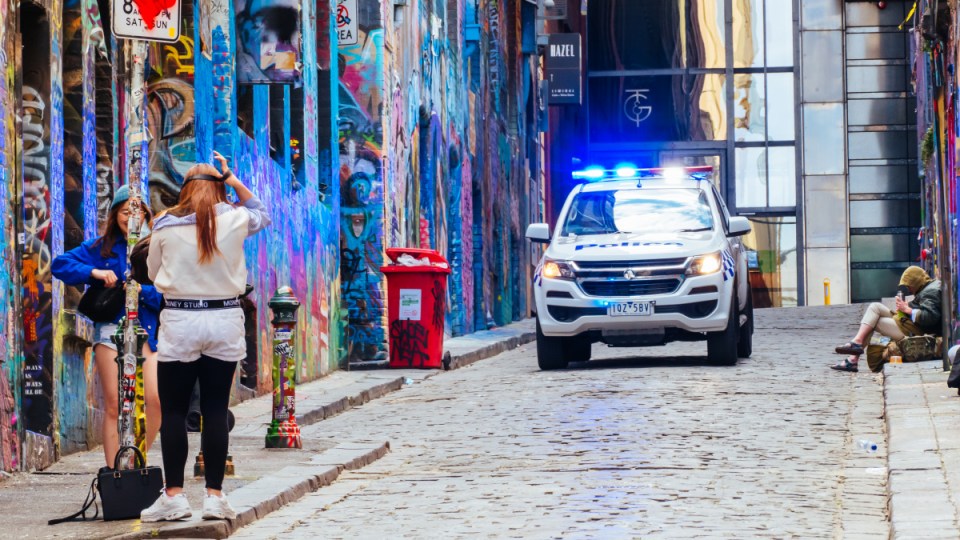 Hosier Lane, in the Melbourne CBD, is all but empty – with police checking the area. Photo: Getty

NSW’s daily tally of COVID infections has topped Victoria’s for the second time in less than a week, as it tackles a worrying jump in locally acquired cases.

Victoria, meanwhile also remained stubbornly in double figures, with 12 more infections on Tuesday, its sixth consecutive day back in double figures. The new tally also lifted Melbourne’s key 14-day average of new cases back up to 10.

It’s the second day that number has risen, reversing a trend of weeks of decline just days before the state government is due to confirm the city’s next steps out of months of virus lockdown.

Mystery infections, another key indicator for future steps, were also up again on Tuesday, to 13.

Victoria also had another a fatality, of a man in his 70s. His death took its toll from the pandemic to 811. The national toll is 897.

Premier Daniel Andrews said two of Tuesday’s infections were linked to known outbreaks, while nine were “provisionally linked”. The remaining case is thought to be an old infection picked up in recent testing.

“It is very challenging when you get down to very low numbers. You only need five or 10 cases, even if they’re very well-contained, and just looking at the aggregate numbers, or the numbers over a 14-day rolling average can tell you a story that isn’t quite accurate.”

“In recent weeks, where we’ve seen some outbreaks, those outbreaks have been handled very well, or we would not be reporting 12 cases a day, or an average of 10, we would be reporting a good number more than that. But these things do change. They evolve.”

Chief health officer Brett Sutton said health authorities had broadened requirements for close and casual contacts to isolate or get tested for the virus after last week’s outbreak in the regional town of Kilmore.

“I think they accept that as a legitimate and proportionate measure to control that outbreak. And we haven’t had new cases,” he said.

“We’ve had half of those get their day 11 quarantine testing. They’ve all come back negative. The other half will be done today. I expect that they’ll be negative as well.”

On Monday, Mr Andrews conceded that Victoria’s plan out of lockdown would likely be redrawn and restrictions could be eased with daily COVID-19 figures in the mid-teens.

“If upon that further analysis, five is the new zero, and 10 is the new five, well, then we’ll have to factor that in, and we will.”

NSW last topped Victoria for new cases last Thursday – as it also confirmed it had ended its near-fortnight streak without community transmission of the virus.

Two of them are GPs whose cases were revealed on Monday afternoon.

The other five are all members of the same south-western Sydney household. NSW Health said they had been identified as part of an ongoing investigation into four previously reported unlinked cases, including a nurse from St Vincent’s Hospital.

One of those people is a disability support worker who has worked at three small group homes in south-western Sydney. Contact tracing and investigations with seven clients and their staff is underway.

Another attended the Great Beginnings Oran Park childcare centre on October 1, 2, 8, and 9 while infectious.

There were also six infections in returned travellers in hotel quarantine.