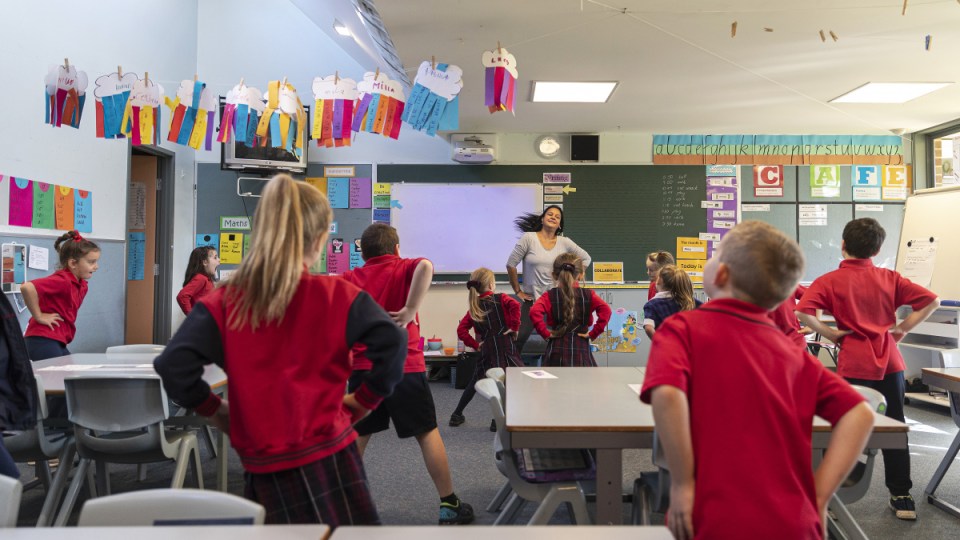 Hundreds of thousands of Victorian children headed back to classrooms on Monday. Photo: Getty

That figure – which is meant to fall to below five by next weekend to allow virus rules to be wound back – is back up to 9.9 as Melbourne posted its fifth day in a row of double-digit increases in cases.

The number of mystery cases in the city in the past fortnight – another benchmark measure – has also risen. It is up one to 11.

There were no new COVID fatalities on Monday. Victoria’s toll has risen by only one since last Thursday, and remains at 810. Across Australia, the pandemic has claimed 896 lives.

Premier Daniel Andrews will give more details at a briefing later on Monday.

The daily update came as primary school and VCE students returned to Melbourne classrooms on Monday, after almost 10 weeks of remote learning.

Students in years eight to 10 are due to return in a fortnight.

On Sunday, Victoria’s state of emergency and state of disaster were extended to 11.59pm on November 8, while Mr Andrews looks at how virus rules might ease despite Melbourne’s recent stalled progress towards lower infection numbers.

At the weekend, the Premier again flagged Melbourne would not be ready to take a “full step” on its path to reopening from October 19. But he hinted that restrictions on outdoor activities were likely to be relaxed.

“It will be the stuff that people are really missing,” he said.

He also indicated businesses in regional Victoria were more likely to see relief than those in Melbourne.

“I think there’ll be more economic things that can happen in regional Victoria because the numbers are low,” he said.

“Does that mean we’re doubling, tripling, quadrupling the number of people that can go to a pub? No.

“But if we can take some further small and safe steps we will.”

The 14-day average of new cases in regional Victoria is just 0.4, and it has no mystery cases in the time period.

It follows an outbreak last week in the regional town of Kilmore, 60 kilometres north of Melbourne. It was sparked by a Melbourne man who dined a local cafe, in breach of coronavirus rules.

Regional Victorian businesses will have to take all reasonable steps to ensure patrons are not from Melbourne or face a $9913 fine, while close contacts of an infected person who refuse a COVID-19 test on day 11 of quarantine will be forced to spend another 10 days in isolation.

Both rule changes came into effect at 11.59pm on Sunday.

Cases up, average up as Melbourne reverses its positive COVID trend