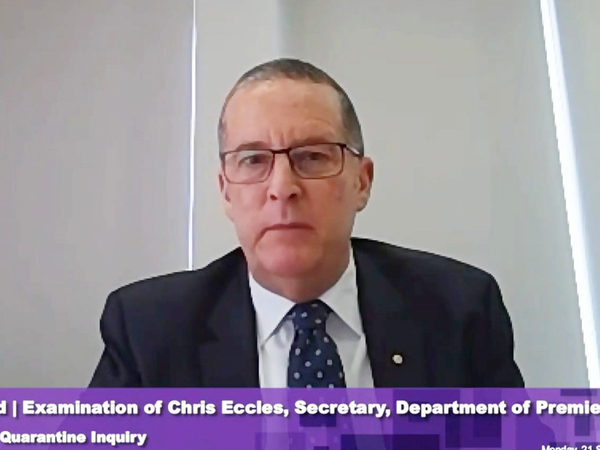 Despite his resignation, Mr Eccles stands by his evidence to the inquiry.

The secretary of Victoria’s Department of Premier and Cabinet, Chris Eccles, has resigned effective immediately.

In texts from that day, Mr Ashton described the appointment of private security as a “deal set up” by Mr Eccles’ department.

However, Mr Eccles insists he did not “convey to Mr Ashton any decision regarding the use of private security”.

“I have taken this decision with a sense of clarity that to remain in this position would be a significant distraction to the ongoing work of the Victorian public sector and the citizens of our state as we enter a critical phase of easing COVID-19 restrictions,.” he said in a statement.

“It is also with clarity that I reaffirm the evidence I provided to the COVID-19 Hotel Quarantine Board of Inquiry and the department’s closing submission to the board.

“My evidence is emphatic that neither myself nor the Department of Premier and Cabinet made a decision to use private security as part of the Hotel quarantine program.”

“The telephone records do not in any way demonstrate that I, or indeed anyone else in DPC made a decision that private security be used in the hotel quarantine program,” the statement read.

“I am absolutely certain I did not convey to Mr Ashton any decision regarding the use of private security as I was unaware any such decision had been made, and I most certainly had not made such a decision myself.”

However, Mr Eccles said “the totality of my evidence to the Board was that I may have contacted Mr Ashton following Mr Ashton’s 1.16pm text message”.

“There has been much commentary and speculation about whether I or anyone else at DPC spoke to Mr Ashton during that narrow timeframe on 27 March.

The decision to use private security guards in the program is believed to be responsible for the state’s second devastating wave of coronavirus, which has killed hundreds of people and led to the nation’s toughest lockdown.