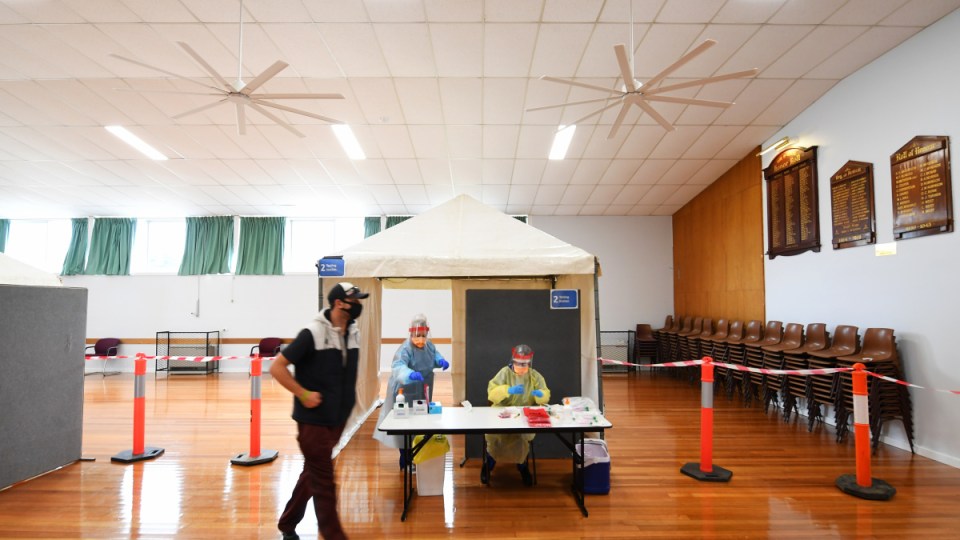 Pop-up testing clinics have been set up in Kilmore, north of Melbourne, after the positive cases. Photo: AAP

Premier Daniel Andrews has reassured Victorians that some COVID rules will be eased on October 19, despite Melbourne appearing unlikely to hit the tough targets required.

The state had 11 new cases of coronavirus on Thursday.

Six were connected to known outbreaks – including the cluster at Kilmore, in regional Victoria. The remainder are still under investigation.

Under the state government’s plan towards a “COVID normal”, Melbourne needs a 14-day average of five cases to move to the next step, which involves retail and some hospitality venues reopening and the five-kilometre limit being scrapped.

The city must also have no more than five mystery cases within the same period.

It was initially predicted that Melbourne’s virus numbers would fall to those targets by October 26, but Mr Andrews brought the date forward to October 19.

Melbourne’s 14-day average stands at 9.7 cases, while it has had 14 mystery cases between September 22 and October 5.

Regional Victoria’s 14-day average, meanwhile, rose slightly to 0.4 on Thursday, with the addition of the Kilmore case. There is also another case in the Murray River town of Mildura, although health authorities believe this is a false positive.

Country Victoria has had no mystery cases in the two-week period.

On Thursday, Mr Andrews said it was “highly unlikely that nothing will change” come October 19.

“There will be some changes, the exact nature of those changes, we will need to look at,” he said.

“We will do whatever’s safe.

“But what people won’t welcome, either from an intellectual point of view or from an emotional point of view really, are steps being taken that are not safe. That just runs the risk of setting us all back.”

Victoria’s deputy chief health officer Allen Cheng said there would be a “day-by-day assessment of the situation” about winding back further restrictions.

“Every unknown source case represents at least one person who gave it to them, so we still are concerned about that,” Professor Cheng said on Thursday.

“That’s, I think, the figure that concerns me most at this stage.

“We still have a little way to go, so we just need to keep an eye on those and continue to investigate those to see where they might have got it from.”

Authorities have been hustling to contain an outbreak linked to the Butcher Club at Chadstone Shopping Centre, which has infected 31 people and spread to Frankston in the south-east and Kilmore.

Victorian authorities are cautiously optimistic the Chadstone cluster has been contained.

“There weren’t any new cases from Chadstone yesterday, so we have a total of 31 cases,” Professor Cheng said.

“We’re still looking, so there’s all the shops that are getting doorknocked and [staff] encouraged to get tested.”

The Kilmore cluster began when a person infected with COVID-19 linked to the Chadstone outbreak dined at the town’s Oddfellows Cafe, in a breach of restrictions on September 30.

Hundreds of people who visited the cafe between September 30 and October 3 are self-isolating after a staff member contracted the virus. Hundreds in the town have been tested in the past two days.

Some 15,298 tests were conducted across Victoria on Wednesday.

Mr Andrews urged any Victorian with symptoms – no matter how mild – to be tested.

“It’s not the detection of a positive case that’s the problem – that’s exactly what we need,” he said.

“It’s about the spread of this virus without us knowing – that’s what can set us back.”

Victoria had no virus deaths on Thursday, its second day this week without adding to its pandemic toll. That stands at 809, while the national figure is 897.

There are 17 Victorians battling the virus in hospital, including one person in intensive care.

According to The Age, they include the manager of the Chadstone butcher shop, who was rushed to hospital on Tuesday after his condition deteriorated.

Also on Thursday, for the first time since June 9, Victoria had fewer coronavirus cases than NSW. The northern state had 12 infections, including a fourth mystery infection in two days.

‘There will be changes’: Vic Premier’s pledge on COVID rules