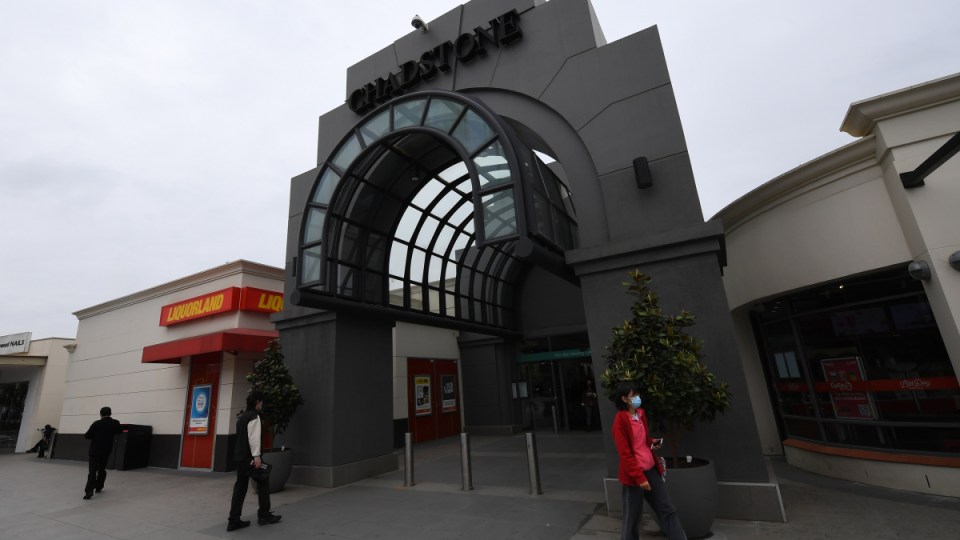 The COVID outbreak linked to Chadstone has grown to 31 people. Photo: AAP

Despite Thursday’s jump, Melbourne’s key 14-day average of new cases has ticked down again. It is at 9.7, but under the state government’s plan to reopen must hit five by October 19 before virus measures will be relaxed.

The number of mystery infections in Melbourne, which must also be at five for restrictions to be wound back, is 14. That is up two from Wednesday.

For the second time this week, however, there were no deaths.

On Wednesday, Victorian health authorities confirmed that more than 230 people were self-isolating in a regional town as Melbourne’s biggest outbreak spread outside the city.

There were 31 cases linked to the Butcher Club at Chadstone Shopping Centre on Wednesday. However, Mr Andrews said he was confident the cluster was under control.

Infections linked to the Butcher Club outbreak have been confirmed in suburbs across Melbourne, including Cranbourne West, Abbotsford, Mulgrave, Noble Park and Melton.

Two people in Kilmore – 60 kilometres north of Melbourne – have also tested positive to COVID-19 after a case connected to the cluster dined at the town’s Oddfellows Cafe.

The state government has rolled out asymptomatic testing in Kilmore to try to halt the virus’ spread. Department of Health and Human Services’ Jeroen Weimar wants everyone who visited the cafe between September 30 and October 3 to get tested.

He said 200 Kilmore residents were tested on Tuesday, while more than 1300 people were tested at Chadstone, Melbourne’s biggest shopping centre.

Mr Andrews denied the Chadstone outbreak would derail plans to ease restrictions later in October. He is expected to announce any further moves on October 18.

Mr Andrews also said he agreed with Prime Minister Scott Morrison that state borders should be opened by the end of the year.

But he flagged that authorities might request travellers have coronavirus tests before leaving the state.

“Or we might have one of these rapid testing technologies fully proved up with enough stockpiles to be able to do a test and 30 minutes later you are free to fly.

“That won’t necessarily stop every single infection but it gives you a higher degree of certainty that a person is in fact safe to travel.”

NSW and South Australia remain closed to Victorians, except those within border communities. SA extended its border freedoms 70 kilometres into Victoria on Thursday.