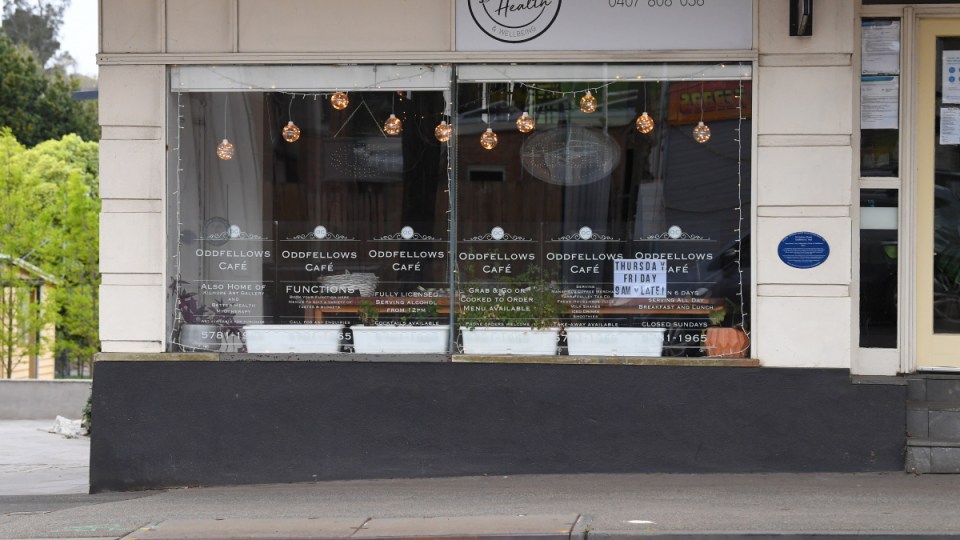 Hundreds of locals are in isolation in Kilmore as authorities try to quell a COVID outbreak linked to a local cafe Photo: AAP

Victoria’s roller-coaster coronavirus ride continues, with cases plunging back into single figures on Wednesday after a worrying spike.

Health authorities confirmed just six new COVID infections in Victoria on Wednesday – down from 15 on Tuesday.

The daily tally came as health authorities boosting testing around Chadstone Shopping Centre – where a linked outbreak has climbed to 31 cases – and sent nearly 200 people in regional Victoria into isolation.

Wednesday’s figures came from 16,400 coronavirus tests across Victoria – including more than 1300 in centres near Chadstone, in Melbourne’s south-east.

“We’ve had a significant outbreak coming out of Chadstone, moving to Kilmore. There’s been a lot of testing activity. Testing really is key to this, Premier Daniel Andrews said.

Mr Andrews said authorities were confident the shopping centre outbreak was under control.

“Some of the tactics as well have been not just what the textbook would tell you, but going, indeed, above and beyond that,” he said.

“This has been very well-handled but, at the same time, it just speaks to how wildly infectious it is that it can run, even when it’s well-handled, you can finish up with 30-plus cases.”

It has also leaked into regional Victoria, with two people in Kilmore – 60 kilometres north of Melbourne – testing positive after an infected Melbourne person illegally dined at a local cafe.

Jeroen Weimar from Victoria’s Department of Health and Human Services said more than 200 people were tested in Kilmore on Tuesday. He urged anyone who had visited the Oddfellows Cafe between September 30-October 3 to get a virus test.

“We want to see if that will bring out any other cases. We want to get to the bottom of this as quickly as we possibly can,” he said.

DHHS has also used the cafe’s “excellent records” to trace every customer who visited in the time frame of concern.

“‘Each of those people has been followed up and as a result we have 177 people and the people that they live with in turn, so 177 people and their immediate households, who are now self-isolating,” Mr Weirmar said.

“That’s a big ask. We’re asking them to do that because they are close contact of a suspected case.”

Mr Andrews said the response of Kilmore locals to the outbreak in their town had been “amazing”.

Earlier, Burnet Institute epidemiologist Mike Toole said the cluster linked to the Chadstone butcher was concerning. Contact tracing – which has sometimes been problematic during Victoria’s second wave – must be perfect to stamp it out, he said.

But the outbreak was not in the “big league” of others that recently plagued NSW. Professor Tool described the Chadstone cluster as a “modest super-spreading event”.

“Not so long ago, more than 60 people were infected with a cluster at the Crossroads Hotel in Sydney [and] more than 100 infected from a cluster linked to a Thai restaurant,” he told ABC radio on Tuesday.

“If it had been a closed-in butcher shop in a small retail strip somewhere else in Melbourne, it could have been much worse,” he said.

On Wednesday, Melbourne’s benchmark 14-day average of new cases fell below 10 for the first time. It is now at 9.9, as five million Melburnians eye its slow creep towards five so the city’s virus rules can be relaxed.

Mystery infections, which must also fall below five for Melbourne to take its next steps towards freedom, were down one, to 12. There are none in regional Victoria.

There were also two more fatalities on Wednesday. They were a woman in her 80s and a man in his 90s.

The Australian toll from the pandemic is nearing 900, with 897 having died. Of those, 809 are Victorians.