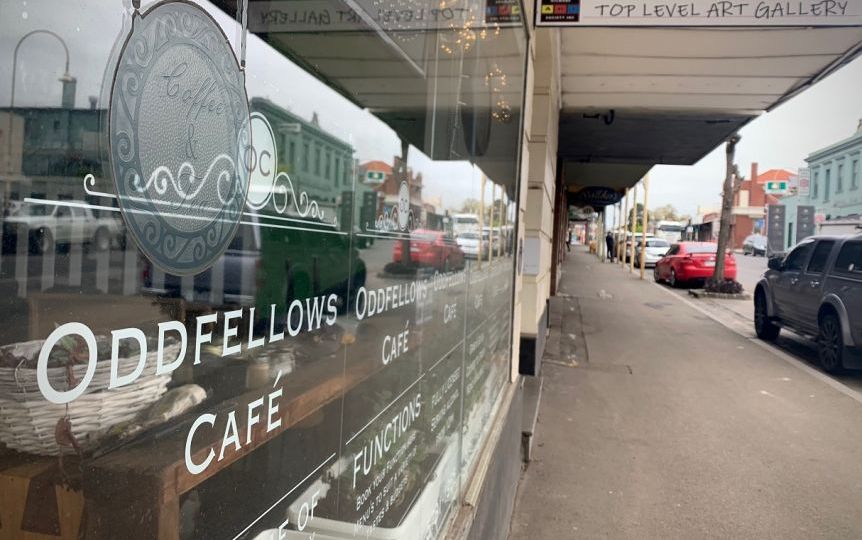 A Kilmore cafe worker who came into contact with the Melbourne traveller was later diagnosed with coronavirus. Photo: ABC

Two COVID cases in the regional Victorian town of Kilmore have been linked to a Melbourne resident who travelled to the state’s north-east while infectious, as the Chadstone shopping centre outbreak widens.

Victoria confirmed one more death and 15 new COVID cases on Tuesday, including some linked to what has become the state’s largest active outbreak outside of aged care.

There are now 28 cases linked to the Butcher Club at Chadstone Shopping Centre, up from 24 on Monday, chief health officer Brett Sutton said.

They include eight Butcher Club staff members, 11 family and household contacts of the cases and four customers who visited the shop.

Two people in Kilmore, in the Mitchell Shire about 60 kilometres north of Melbourne, have also tested positive after a case connected to the Chadstone outbreak travelled to regional Victoria last week, Professor Sutton said.

“That individual, as far as I know, was not aware that they were a close contact at the point of time that they were travelling,” Professor Sutton said, noting they were in the area for a permitted work reason.

“It wasn’t that they were breaking quarantine.”

One of the Kilmore cases is a staff member at the Oddfellows Cafe, where the Melbourne resident dined while infectious last Wednesday.

On the cafe’s Facebook page, owner Kim Short said she was “devastated” to report the business had received the “dreaded call” on Monday informing it that a staff member who was in contact with the customer had tested positive to the virus.

“All our contact tracing has been given to the DHHS and anyone who is considered a close contact will be contacted and those who have already been contacted will most likely be recontacted,” she wrote late on Monday.

“If you dined in with us from Wednesday to Saturday last week and for some reason you are not contacted by [Tuesday] morning, please let me know.”

Ms Short urged anyone in Kilmore with the slightest symptoms to get tested at the local hospital.

Premier Daniel Andrews said a drive-through testing clinic in Kilmore had already booked out on Tuesday, and that there was “other pop-up activity” happening in the town.

“It’s asymptomatic testing for a reason and you can go and get tested – and the results will be literally like gold for us.”

After dining in Kilmore on the morning of September 30, the Melbourne traveller then visited White Line Tyres in Benalla in the state’s north-east between 12-3pm.

Mr Andrews said people were being tested in Benalla but he was not aware of any positive tests yet returned there.

“I don’t think anyone really understands what a gargantuan task the contact tracing has been through this wave,” he said.

Contact tracing during the second wave was also challenging, Professor Sutton said, because many cases had “difficult” social and economic circumstances.

Professor Sutton said the Melbourne resident had a permitted work reason to go to regional Victoria. But he said Melburnians who visited regional Victoria should get only takeaway food, rather than sitting down and dining.

“You can only go [to regional Victoria] for the purposes of your work, and those other essential things that you might require,” he said.

“But not to enjoy the fruits of regional Victoria, as it were.”

Despite the jump in infections on Tuesday, Melbourne’s benchmark 14-day average is down to 10.6.

Under the city’s proposed path out of lockdown, the average must be below five for it to take the next step.

Asked on Monday – when Victoria had just nine new cases – if Melbourne was on track, Professor Sutton said: “My gut feeling is it will be a line ball. It’s not certain one way or the other.”

The plan also requires fewer than five mystery cases statewide for a fortnight before rules will be wound back. On Tuesday, that figure for Melbourne was 13, while it was zero in regional Victoria.

“I don’t like to see a number that’s in double figures and not in single figures, and no one obsesses over the daily numbers more than me or my team,” he said.

“They are, again, predominantly related to known cases, to outbreaks, and we have to get on top of the outbreaks to really drive these numbers down.”

He said Victoria’s public health team was “throwing absolutely everything” at the latest outbreaks.

“There’s no country in the world that has gone through a second wave of this size as successfully as Victoria has,” he said.