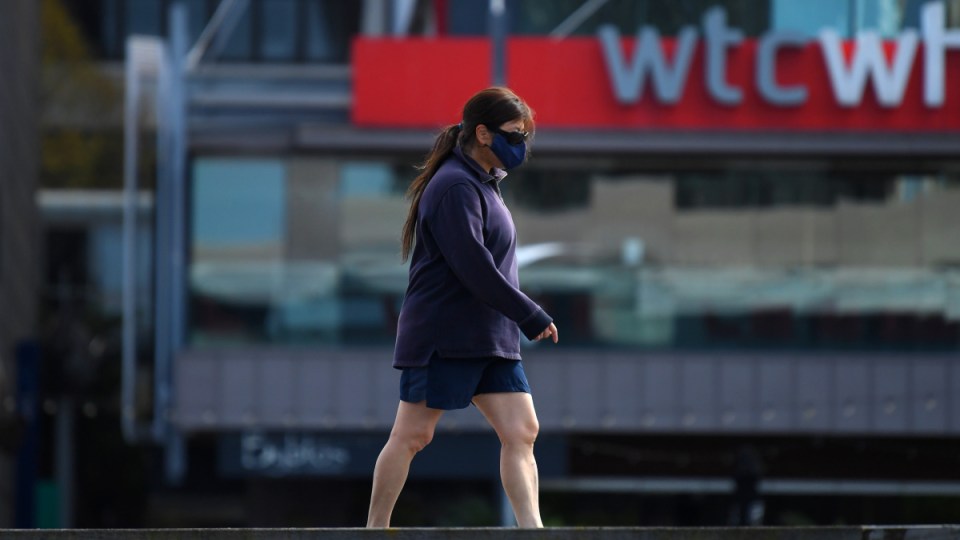 Melburnians are hoping to move to the next stage of easing restrictions by October 19. Photo: AAP

Victoria recorded another three coronavirus deaths on Saturday, taking the state toll to 805 and the national figure to 893.

There were eight new cases in the state, as Melbourne’s 14-day average dropped to 12 and the regional figure to 0.1.

The latest numbers come as the state attempts to get to grips with an outbreak of COVID-19 linked to Australia’s biggest shopping centre.

A cluster of cases at The Butcher Club inside Chadstone Shopping Centre in Melbourne’s southeast has grown to 11 and includes a family in Frankston.

The Premier challenged Victorians in his Friday press conference to consider the potential impact of a cluster in a such a large, busy setting.

“If we were to open up now, just as our modelling tells us…it will be many hundreds of cases,” he said.

The average needs to drop below five and there must be fewer than five mystery cases in a fortnight before authorities further ease Melbourne restrictions.

The Premier expects this to happen by October 19.

Adding to the task at hand is a growing sense of complacency and fatigue which saw a maskless crowd gather in a huge group to take in Friday’s afternoon sunshine at St Kilda beach.

Mr Andrews slammed the beachgoers as “selfish” for jeopardising the state’s progress as it eyes the end of lockdown.

The Premier said he was disappointed – and his family furious – to see television footage of crowds at gathering at St Kilda beach in Melbourne on Friday.

The vision showed people breaching social distancing requirements and mask-less beachgoers kissing the camera and then a reporter on the head several times.

Mr Andrews said not only was the behaviour selfish and dumb, it was illegal.

“No one has the right to break the rules and potentially put at risk everything that good, decent law-abiding Victorians have created, have built. All of their sacrifice has to be worth something,” he told reporters on Saturday.

“Spending time at the beach without a mask, without social distancing now will just mean that you won’t get to go to the beach for all of summer. It just doesn’t make any sense.”

He said Victoria Police would be out in force at beaches across the city on Saturday to enforce the rules.

Chief Health Officer Brett Sutton said the stupid behaviour, which came as the state recorded another day of cases in single digits, made him angry too.

Both men said the behaviour could lead to more community transmission and jeopardise the state’s path out of lockdown.

Meanwhile, authorities responsible for reviewing the state’s hotel quarantine program have tried to reassure the public ahead of flights resuming.

The hotel program now has “strong and accountable leadership” committed to “making sure that we have got proper oversight, audit and proper checks and balances”, she said.

An inquiry into the program has heard the first iteration of it beginning in March was responsible for the state’s second wave of COVID-19, which has killed more than 800 people.

Corrections Victoria took over the running of the scheme in late June.

“We are really confident in the reset and when flights arrive we will certainly be ready.”

Travellers to Melbourne airport will be medically assessed as soon as they disembark and transferred directly to a hotel if symptomatic, Ms Cassar said.

She and Ms Hennessy joined the premier and Chief Health Officer Brett Sutton in front of the media after authorities confirmed two workers in the revised hotel program were on duty while infectious.

Staff from Spotless were replaced by police mid-shift on Wednesday at the Novotel in Southbank, after a healthcare worker told The Age she feared their practices would lead to further COVID-19 outbreaks.

The workers are among nine who have tested positive since the program was overhauled, but were asymptomatic at the time.

DHHS has confirmed that one hotel quarantine staff member thought to have acquired the virus in an aged care facility was, at the same time, working shifts at the Grand Chancellor Hotel.

Dr Sutton said all nine cases contracted the virus at the height of the second wave, most likely because of community transmission.

None were responsible for breaches and none had caused further transmission, he said.

Dr Sutton said cleaning staff could not be expected to be limited to just one facility as they would not earn enough income.

There have not been any active cases related to the workforce running hotel quarantine for at least four weeks.

There are 107 people currently in hotel quarantine, of whom 55 are frontline workers.

Flights into Melbourne are not expected to resume until after the hotel quarantine inquiry delivers its findings, which are due by November 6. A small number of flights are still operating for those granted special exemptions.