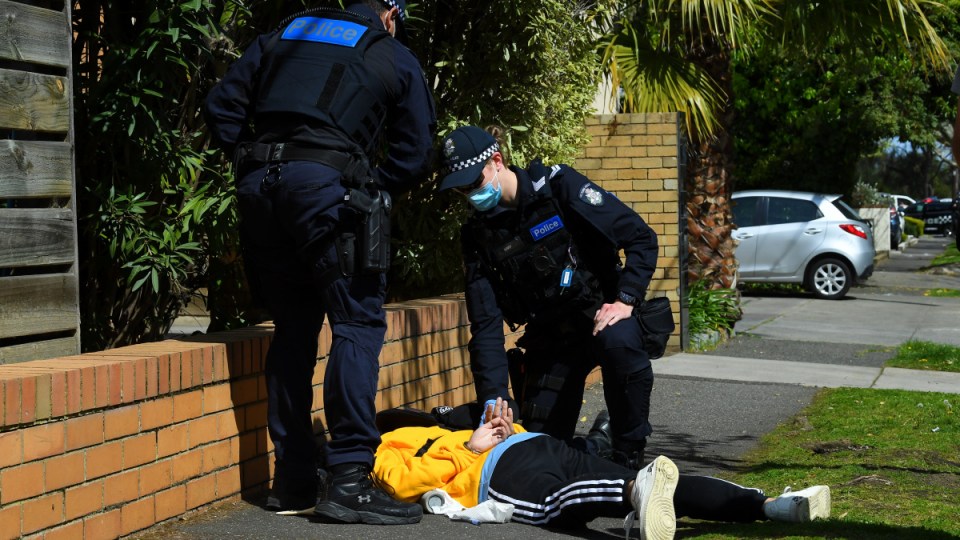 Anti-lockdown protesters have clashed with police in Melbourne’s inner beachside area in a chaotic, scattered rally.

About 50 to 100 demonstrators started at the State Library but cancelled their action and moved to Elsternwick Park where they were chased by police on horseback.

Some ended up marching along Elwood Beach in a loose formation before they were again dispersed by police resulting in several arrests on Ormond Esplanade.

Throughout the disjointed protest there was shouting about Premier Daniel Andrews and coronavirus restrictions.

There was “a lot of running and not much protesting” one photographer said.

Another described the exercise as “chaotic”.

Some protesters continued to scatter through backstreets, even jumping fences into private property.

One arrested by police was filmed by Nine News telling officers: “Wake up, I know you already know this is wrong.”

Victorian Premier Daniel Andrews had urged anti-lockdown protesters not to gather following reports of more planned protests in the city on Saturday, labelling the protests “illegal and irresponsible” during yesterday’s press conference.

Saturday’s figures take the state’s coronavirus death toll to 757 and the national count to 844.

Metropolitan Melbourne has a 14-day new case average of 39.3, well below the state’s target of 50.

Meanwhile, public health authorities have raced to stop infections growing in the Casey and Dandenong council areas on the Melbourne’s southeast rim, which now has 90 active cases.

“I would say it is under control,” he told reporters on Saturday.

“What we do know is people are isolating appropriately and that close contacts are in quarantine, but people have obviously been exposed to the virus and they can develop illness any time up to 14 days after having been exposed.”

A Monash Health spokesman confirmed it was caring for three people in hospital connected to the Casey cluster on Saturday.

Contact tracers discovered members of each house had been breaching the 5km travel limit for visits.

A special team has been created to target the cluster, with the government saying it is in conversation with local community members and leaders.

Other cases in the area are linked to workplaces, including nine connected to a truck manufacturer and six to Dandenong Police Station.

Mr Andrews also confirmed retired police officers will be recalled to help conduct household checks in what the state Opposition has deemed a “recipe for disaster.”

The Department of Health and Human Services is recruiting more authorised officers to conduct patrols and compliance inspections and will look to former police to fill the ranks.

Despite the cluster, the state’s 14-day rolling infection average continues to improve, dropping to 42.7 for Melbourne and 2.3 for regional Victoria.

In the 24 hours to Friday, Victoria recorded 45 new infections and five deaths.

There have been traffic delays on key arterial roads out of Melbourne as police seek to protect the regions from virus spread.