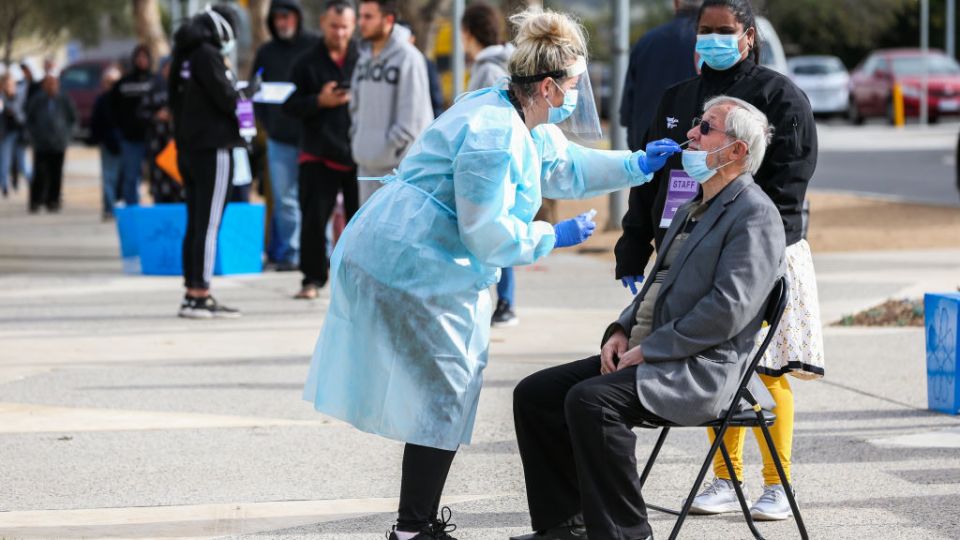 Australia currently has the highest COVID-19 per capita infection rate in the world. Photo: Getty

There were also five more fatalities, taking the state’s COVID death toll to 750. The national toll is 837.

The latest to die were a man in his 50s, one in his 70s, another in his 80s and two women in their 90s. All were linked to aged care outbreaks.

Friday’s reported infections come after a three-month low of just 28 on Thursday, and as state health authorities rush to find the links between a worrying cluster of COVID-19 cases in Melbourne’s south-east.

On Thursday night, there were 34 cases of COVID-19 linked to the Hallam and Casey areas, including 33 active infections. It has also sparked concerns for one of the area’s largest shopping centres, Fountain Gate, after an infected person visited the centre.

The outbreak is Victoria’s largest active cluster outside aged care.

Despite Friday’s jump in new infections to a seven-day high, Melbourne’s benchmark rolling 14-day average has fallen further. It is down to 42.7 (from 44.4 on Thursday).

Five are returned overseas travellers in hotel quarantine. The remaining one is locally acquired, in linked to the Liverpool Hospital dialysis cluster, which has grown to 21 infections.

Back in Victoria, deputy chief health officer Allen Cheng said on Thursday the Casey outbreak was of “most concern” to health officials, who were looking at it very closely.

New virus testing sites have been opened in the area, and council and community health officials are stepping up efforts to contain the outbreak.

Professor Cheng said Victoria was getting to the end of its COVID infections and the strategy was to “jump on the tail”.

“These are the sort of situations we really need to be on top of to get numbers down,” he said.

Professor Cheng said authorities were trying to determine if the cases were linked by workplaces or family groups.

“We do think that there are links and they are obviously all in the same area,” he said.

“There’s a number of households … we’re trying to find out where everyone has been so we can make sure the transmission chains are controlled,” he said.

Meanwhile, Professor Tony Blakely, an epidemiologist at the University of Melbourne, said earlier the state’s overall coronavirus numbers were “tracking down nicely”.

The ABC is reporting that Victoria is ahead of where modelling used to determine the state government’s plan to reopen the state predicted it would be – with 10 days to go before Melbourne’s restrictions are due to ease again.

The University of Melbourne and University of New England modelling, released by the state Department of Health and Human Services earlier in September, predicted the state would have a 14-day case average of 63 on September 17.

It must be under 50 for Melbourne’s coronavirus rules to be relaxed from September 28.