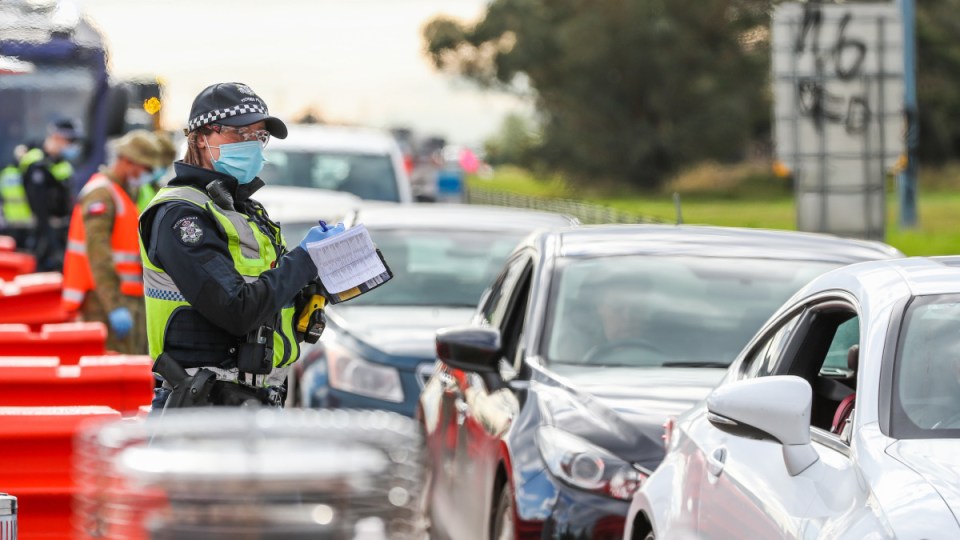 Melburnians trying to escape the city’s restrictive COVID measures for the freedoms of country Victoria face a stiff new fine if they’re caught.

Victoria Police is throwing a “ring of steel” around the city amid fears the relaxed coronavirus rules in regional parts of the state from Wednesday night will spark an exodus of Melburnians, which risks further spreading the virus.

The police and Australian Defence Force presence has already been stepped up on roads leaving Melbourne, with checks on more cars and vehicles.

But the biggest deterrent is likely to be a $4957 fine for a new offence: “Failure to comply with a requirement to remain in a restricted area”.

Victoria Police Deputy Commissioner Rick Nugent said the penalty would apply to any adult who tried to travel out of Melbourne without a lawful excuse. For a family travelling together, that meant both parents might face fines.

The penalty is designed to deter people from Melbourne attempting to run the gauntlet.

“We do not want regional and rural communities to be put at risk by Melbourne metropolitan people,” Mr Nugent said on Wednesday.

“We don’t want the virus to spread again.”

He said the aim was to “check every car” at police and ADF roadblocks on the city’s outskirts, which would inevitably lead to long delays.

“We’ll be checking every vehicle that is towing a caravan, a camper trailer or towing a boat or a jet ski, or that has a surfboard or fishing rods,” he said.

Police will also patrol rail and bus depots, caravan parks and boat ramps to check people’s details and whether they have a valid reason for travel.

Regional Victoria moves to the third step in its plan to reopen after the state’s deadly second coronavirus wave at 11.59pm on Wednesday.

Residents will resume numerous freedoms still denied Melburnians, including reopening businesses, a staggered return to school and being able to host friends at home.

Regional Victoria had just 37 active COVID infections on Wednesday, and a rolling 14-day average of 3.5 cases.

“The feedback I get, from very small country towns to big regional centres, is they’d love to have visitors but they love being virus-free a lot more,” he said.

Active virus cases across Victoria fell to 991 on Wednesday, below 1000 for the first time in many weeks.

“[That] should be a point of pride for every single Victorian who is doing the right thing, making sacrifices, staying the course,” Mr Andrews said.

“This strategy is working. Numbers are coming down and as they come down we have many more options.”

Victoria had 42 new cases on Wednesday, the same as it reported on Tuesday.

Melbourne’s crucial rolling 14-day average of new coronavirus cases has also fallen below 50 for the first time, to 49.6. That brings it in line for eased virus rules from September 28.

Mr Andrews has ruled out an early move on winding back Melbourne’s restrictions.

“We are making an assessment, not today, but in a short amount of time, about being in the 30-50 band and if we are, not just for a day, but for a decent period, for a significant period, then we’ll be able to make that call,” he said.

“I know that’s challenging but, as we’ve said, we are on track to getting to that 30-50 band and staying there so we can take significant steps.”

Eight more COVID fatalities were confirmed on Wednesday, taking Victoria’s toll from the pandemic to 737. The national toll is 824.