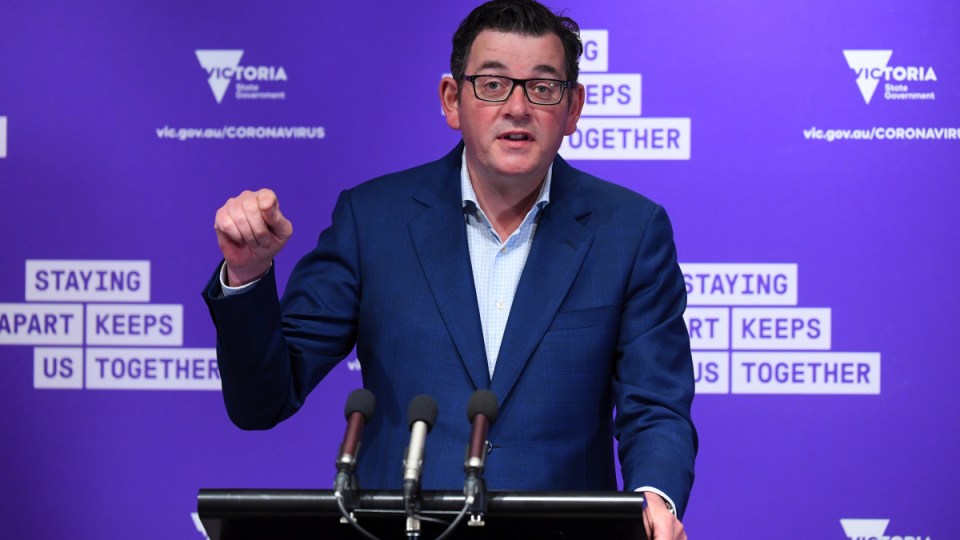 Daniel Andrews has taken aim at people who have targeted his extended family over his virus leadership. Photo: AAP

Victorian Premier Daniel Andrews has hit out at the creator of a personal attack on his leadership involving his dead father, calling it a low act.

He said the coronavirus had brought out the best in some Victorians, but divisiveness and nastiness in others.

“I’d say that we’re at our best and our strongest as a state when we come together, when we look out for each other,” he said.

“I think it’s equally try to say that we’re at our worst and our weakest when this nastiness, this divisiveness, comes into the challenges that we face.”

Anti-government protesters chafing at Victoria’s COVID rules have begun sharing images of boots outside their homes with the tagline “give Dan the boot” as a sign of their disapproval of the Premier’s leadership.

At a briefing to announce relaxed virus rules across regional Victoria on Tuesday, Mr Andrews said he had no problem with the protest, as long as people did not break the state’s restrictions, and that they did not become personal.

One image shows a pair of boots on a fence outside a shed at his family’s farm at Londrigan, near Wangaratta.

Mr Andrews said the photographer had not chosen the main gate of the property, but to make a point they had chosen the place where his father Bob’s funeral was held in 2016.

“The last time I was in that shed was when I carried my father’s coffin out of it, and I think that that is – I won’t use the words that my father would use to describe that sort of act – that’s just low,” Mr Andrews said on Tuesday.

Mr Andrews said having different views to him was a fine and healthy part of democracy, but decency mattered too.

The image has drawn comparisons to the 2012 comment by radio host Alan Jones that then-Prime Minister Julia Gillard’s father John had “died of shame” because of her alleged lies.

Victoria had 42 more COVID infections on Tuesday – and, for the first day since July 13, no additional fatalities.

The pandemic has so far claimed 729 Victorian lives. Australia’s toll is 816.

Tuesday’s figures took Melbourne’s rolling 14-day average of new virus cases down to 52.9. In regional Victoria, which had only one of Tuesday’s new cases, the average is 3.6.

Mr Andrews said the significant easing of virus measures for areas outside Melbourne was a proud day for the state. The rule change will kick in from midnight on Wednesday.

“Having reached a 14-day average of 3.6 and with no mystery cases, regional Victoria has reached the necessary “trigger point” in our roadmap – meaning our public health experts have advised that we can take this next step.

“Because it shows – in very real terms – the strategy is working. The hard work of all Victorians is paying off.

He said it showed that “slowly and surely, we can – we will – drive this thing down”.

Mr Andrews also urged Melbourne residents not to get discouraged about staying in Stage 4 restrictions as the rest of the state opens up.

“I’d encourage people not to see it that way and instead see this as proof positive … we have driven case numbers down to very low numbers in regional Victoria,” he said.

“That should be something that I think inspires confidence and a real sense of hope that the same thing can be achieved to the best of our ability across metropolitan Melbourne.”

But there are no immediate changes to Melbourne’s lockdown rules and people cannot travel out of the city without specific reasons.

Mr Andrews also warned that police would tighten checkpoints out of Melbourne.

The premier was measured about having no fatalities for the first time in two months, noting that 118 people are still in hospital and 11 are in intensive care.

“The reason I’ve not made a big thing of that is because I can’t be certain … I can’t guarantee that that number holds tomorrow,” he said.

Melbourne will move to its next step of reopening on September 28 if the 14-day average falls between 30 and 50.

The city took its first tentative steps out of lockdown on Monday, with those living alone or single parents allowed to have one visitor, outdoor exercise extended to two hours and the curfew start time put back an hour to 9pm.