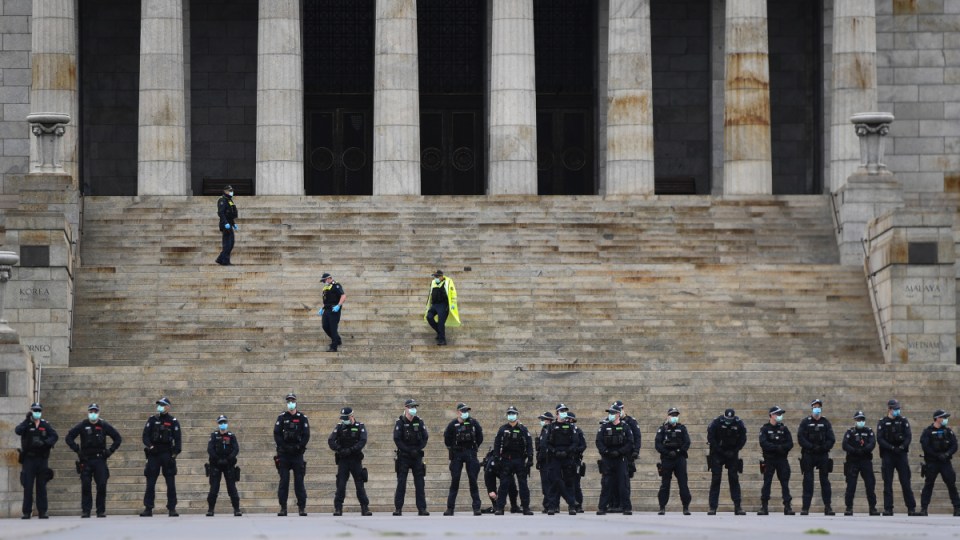 Police form a line around the Shrine of Remembrance in Melbourne. Photo: AAP

Melbourne is a city under siege by the coronavirus. For the most part, it’s a city that has hunkered down – done what authorities have prescribed to limit the spread of COVID-19.

Melburnians have gone without trips to eat the best Italian food on Carlton’s Lygon Street. They have foregone soaking up the rays on sunny days in front of Brighton’s iconic bathing boxes. They have sacrificed birthday parties, graduations, weddings, even the funerals of loved ones.

The city has lost its beloved football to Queensland and watched as Sydney poached one of its blockbuster art exhibitions.

Melbourne is doing it tough, but getting on top of a wicked enemy at the same time, as the declining number of daily COVID-19 infections demonstrates.

But some, ignoring the the pandemic’s threat to life and health, are calling for Melbourne’s strict lockdown to end immediately.

Over 1500 people were expected to turn up to South Yarra’s famous Royal Botanic Gardens running track, known to locals as ‘The Tan’, on Saturday afternoon to rally against the lockdown and 8pm curfew, against the Premier they call ‘Dictator Dan’.

But on a day of grey skies and bursts of drenching rain, the final turnout was a lot smaller. They were there, they said, to walk for freedom – but there was only a relative handful of them.

Organisers had advertised the event as “a legal walk allowing citizens to come together, get healthy and talk about getting our freedoms back.”

The police dressed for the occasion. Wearing militarised riot gear, 100 officers patrolled the park. Mounted police circled the Shrine of Remembrance, and a wall of blue blocked off the Eternal Flame forecourt.

They had backup too – heavily armoured vehicles patrolled the streets. From the skies VicPol’s Air Wing monitored the situation.

Victoria Police had prepared early , making unannounced house calls to 90 known or suspected lockdown dissidents in the week leading up to Saturday, urging them not to attend.

Police were also stationed at checkpoints on the key arterial roads leading into the CBD – their brief, to stop would-be protesters people entering the city.

For a few quiet hours in the early afternoon, it looked like police were all dressed up with no protesters to show.

But then a trickle of 100 anti-lockdown protesters came through, carrying signs that read “Open Our Churches” and “Liberties”. They paraded down The Tan.

When they refused to produce identification scuffles broke out. Police started making arrests.

In a bizarre move, one protester, who had not been noticed by officers, yelled at them, pointed to his sign, and was taken away in handcuffs.

A man wearing a mask emblazoned with “Sack Dan Andrews” was also walked off.

The ‘Open Our Churches’ sign was snatched by officers.

In total, 14 people were arrested and 51 issued with infringement notices.

Just a day before, their leader and organiser of The Tan rally, Tony Pecora, a former candidate for Clive Palmer’s United Australia Party, appeared before Melbourne Magistrates’ Court via video link.

“He believes that COVID-19 is a genetically engineered virus by world banks to kill off weaker humans,” Detective Acting Senior Sergeant David Schaefer told the court.

On Saturday, Premier Daniel Andrews slammed protesters for turning out, describing them as “selfish” and their actions “unlawful”.

But it was perhaps the Victoria Police Assistant Commissioner Luke Cornelius who put it most graphically.

Explaining how it was “incredibly frustrating” to be continuously urging people not to attend the protests, he said: “To be honest, I feel a bit like a dog returning to eat his own vomit. None of us want to do that and I’m sick of it, really.”