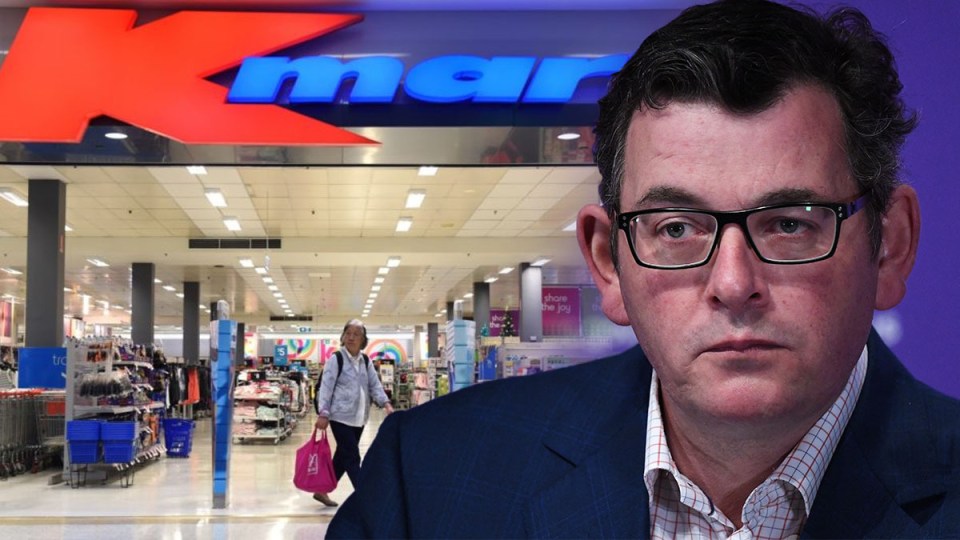 Retail giant Kmart has accused Victorian Premier Daniel Andrews of taking it by “complete surprise” by continuing the state’s coronavirus restrictions, and pledged to stand by its staff until its stores reopen.

The continued closure of shops across the Melbourne metropolitan region as part of Stage 4 restrictions have hurt retailers, with Kmart joining a chorus of business leaders criticising the Victorian premier.

“The Victorian government’s roadmap for re-opening the state economy announced last Sunday took the retail sector and Kmart Group by complete surprise,” he said on Wednesday.

“We were not provided with any forewarning in relation to the massive extension to the continued closure of retail trading that was announced.”

“Best-case scenarios will see our stores start to re-open from October 26, which means our stores will have been closed in metro Melbourne for a minimum of 12 weeks.”

However, the group has committed to continuing to pay stood-down Victorian staff at Kmart, Target and Catch their full salaries.

“Kmart Group has gone to considerable expense as a business to provide this support because we recognise how important it is to stand by our team members who, through no fault of their own, are unable to work,” Mr Bailey said.

“We believe it’s important the Victorian government takes a holistic approach and we will continue to encourage the government to support all businesses and individuals that have sacrificed so much during this pandemic.”

It follows former Myer boss Bernie Brookes lashing the Victorian government in The Australian for its lack of consultation with the business community and adopting a “scorched earth” approach to retail.

Mr Brookes, who was previously a senior executive at Woolworths, heavily criticised the state government for its decision to extend Stage 4 restrictions.

The slow pace of the post-lockdown plan, particularly for metropolitan Melbourne, has attracted criticism from political rivals and many in the business community. But Mr Andrews said it was the only way forward, after the outbreak that has already claimed nearly 700 Victorian lives.

“If anger and frustration were like a vaccine against this virus, then we’d all be in a much better position,” he said on Wednesday.

“I just say to people, the notion that I have chosen this way to go and there were 50 other options I could have chosen, that’s not in any way accurate.

“We’d all like to be open tomorrow, myself included. But to do that is not an act of leadership, that is to cave to some of the pressure that’s there, to be driven by the anger instead of the epidemiology, to be driven by opinion instead of science and data and doctors. That is not what I’m about.”

Victoria’s COVID cases spiked to 76 on Wednesday, up from 41 on Tuesday.

Wednesday’s tally reversed a recent trend of lower numbers as Melbourne heads down towards the daily average of 30-50 cases set as a benchmark for its path out of COVID restrictions.

Mr Andrews said Melbourne’s rolling 14-day average had fallen to 74.5. In regional Victoria, which had just seven new cases on Wednesday, the average is five.

“It is possible to be angry, to be frustrated but deep down to know that the only way out of this is to follow the rules – and I think many Victorians are doing just that,” he said.

“No one’s pleased to be under these rules but opening up for a short time and then not being able to stay open, that won’t do much for anger levels or our fight against the virus either is point I am making.”

Mr Andrews said regional Victoria was “on the cusp” of meeting its targets to looser restrictions, and could potentially take two steps towards reopening “quite soon”.

“That is not for today. There will need to be further days elapse for us to get to that point – but the numbers are encouraging,” he said.

Elsewhere, authorities have renewed their pleas for people in and around the coastal Victorian town of Apollo Bay to have COVID tests after viral fragments were detected in wastewater.

Testing of sewage samples collected in Apollo Bay has shown fragments of SARS-CoV-2, the virus that causes COVID-19.

Testing of up to 300 sewage samples a week is being done at 25 sites across Victoria to detect the spread of the virus.