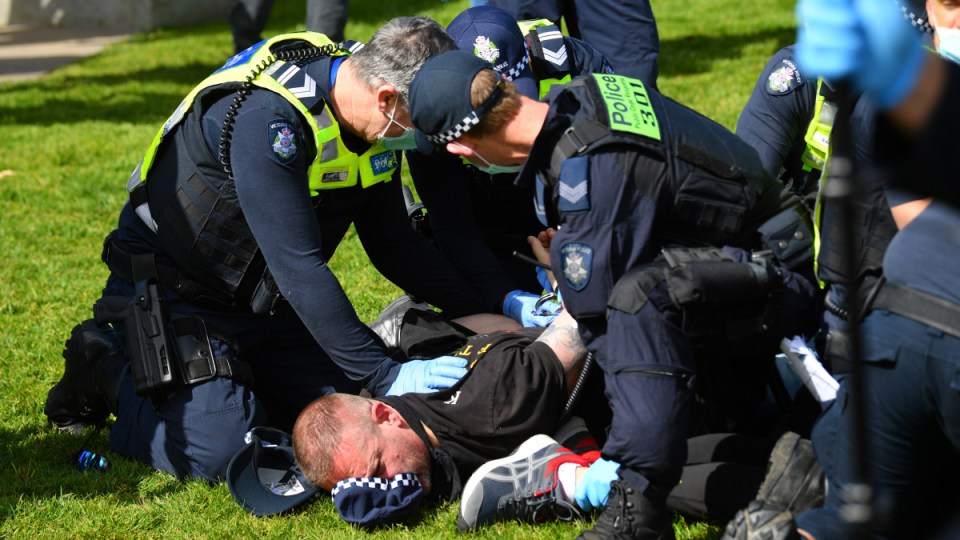 Multiple people have been arrested by police during violent scuffles at anti-lockdown protests in Melbourne.

Many of the protesters were not wearing masks.

Some chanted “freedom”, while others shouted insults at the assembled media.

Officers were punched by one man at the city’s Shrine of Remembrance on Saturday before being fitted with a mask and handcuffs.

Up to 300 people gathered at the shrine where the mood was described as tense.

Police on horses pushed the mob towards the shrine’s steps, before protesters started to disperse.

Some of the group carried placards with anti-government sentiments and at one stage were singing the Australian anthem.

A woman was arrested after refusing to put on a mask when asked to by police, the ABC reported.

“There is no epidemic – that’s just a pretext to keep us in lockdown,” the woman told reporters as she was leaving.

The woman, who was holding signs that said “Is this our children’s future?” and “No Epidemic, Just Gov Tyranny”, said the number of people who have died does not warrant the lockdown measures in Victoria.

Activists have attracted thousands of their followers onto encrypted messaging apps as Facebook has shut down their social media pages.

Police had been on standby for protest rallies across Victoria after plans were aired to challenge the state’s strict lockdown rules which include an 8pm to 5am curfew, and limited travel and time away from home.

Elsewhere, hundreds of protesters have gathered on the steps of Parliament House in Perth in as part of Freedom Day, as kids and families brandished signs against vaccinations, face masks, quarantine, lockdowns and border restrictions.

In Adelaide, protesters gathered in Rymill Park, some carrying placards questioning the existence or severity of the virus.

Ahead of Saturday, police confirmed they had arrested four men in connection with the rally in Melbourne.

Those arrests followed the well-publicised arrest of a pregnant Ballarat woman over allegations of a separate rally planned there for Saturday.

As the protests raged, Premier Daniel Andrews was updating the daily coronavirus statistics with 11 more people who died of COVID-19 and another 76 cases.

News of the arrests did not reach the press conference but Mr Andrews sent a general message to those protesting.

“It is not smart, it is not safe, it is not lawful, in fact it is absolutely selfish to be out there protesting,” he said.

“The only fight we should be engaged in is against this virus.”

In a statement earlier today, Victoria Police said “it is very clear that people cannot leave their home to protest” under stage 4 restrictions.

“Participating in this proposed protest would be a serious and blatant breach of the Chief Health Officer’s directions and jeopardises the health of the entire community,” the statement said.

“We will have a strong, visible presence in and around the CBD.

“We are extremely well prepared to respond, and those thinking of still protesting in the city can expect a swift and firm response from police.

“We have no hesitation in issuing $1,652 fines to anyone blatantly breaching the restrictions, as well as making arrests if necessary.”

Arrests and fines as hundreds join anti-lockdown protests in Melbourne