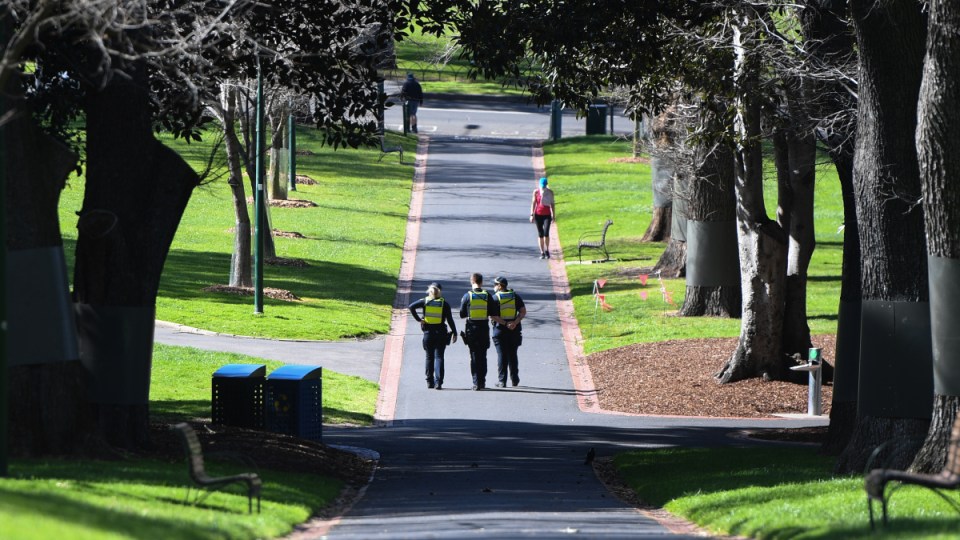 Police are bracing for anti-lockdown rallies in Victoria. Photo: Getty

Victoria has reported 11 more COVID-19 deaths and 76 additional diagnoses as authorities expect to combat anti-lockdown rallies across the state.

Fifty-nine deaths were reported in Victoria yesterday, however 53 of those were historical aged-care deaths.

Six of the deaths occurred in the past 24 hours and five in previous “recent days”.

Saturday’s statistics take the state’s death toll to 661 and the national count to 748.

Victorian Premier Daniel Andrews is preparing to release on Sunday the “road map” out of the stage-four coronavirus restrictions imposed in early August.

“There will be outbreaks, there will be hopefully very small numbers of additional cases in the weeks and months to come, but (it’s) got to be a fair fight,” Mr Andrews told reporters.

“(The strategy) will give us a COVID normal that we can lock in so that as we look to Christmas and to 2021, we have every confidence we can have a stable set of rules, we can find that COVID normal, we can save lives and livelihoods, open up.

“Not to be open for just a few weeks, but be open for as long as it takes to see this (pandemic) off until a vaccine arrives … that is the strategy.”

“It is critical to us having the most complete picture of where this virus is, how it’s presenting,” he said.

“It gives us the best sense of what we’re up against, and that means we can make much better decisions to find that lasting COVID normal, that can only be found after we have a slow, steady, and safe easing.”

There are now 1956 active cases in Victoria, including 102 in regional areas.

Dr Sutton believes the state is well on the way to defeating the coronavirus.

“If we can do everything that’s required now, we will drive those numbers down and we will get to a point where we can keep them down,” he said

Meanwhile, police are urging people to adhere to restrictions on community movement as some groups air plans for protest rallies against the measures.

“There is a very visible, very significant police presence in the city,” he said.

“Some people have forecast that they in a selfish, dangerous and unlawful way protest and police are taking appropriate steps.”

Four men have been arrested and charged with incitement over the Freedom Day rally planned for several inner-Melbourne locations, including the Shrine of Remembrance.

A pregnant Ballarat woman also faces the same charge over a rally planned for the regional city.

The woman posted video of herself in handcuffs on Wednesday.

Police have also warned about 80 people against attending the Melbourne rallies as they enforce Victoria’s lockdown rules.

“The tinfoil hat-wearing brigade are alive and well in our community,” Assistant Commissioner Luke Cornelius said.

“They’re taking every opportunity to leverage the current situation to serve their own ridiculous notions about so-called ‘sovereign citizens’, about constitutional issues and about how 5G is going to kill your grandkids.”

On Friday, Mr Andrews backed police efforts to shut down any planned protest rallies while the lockdown rules remain in place.

“You can’t ignore the reality you’re in and give yourself a leave pass and go and do something that, in all likelihood, will contribute to the spread of this (virus),” he said.