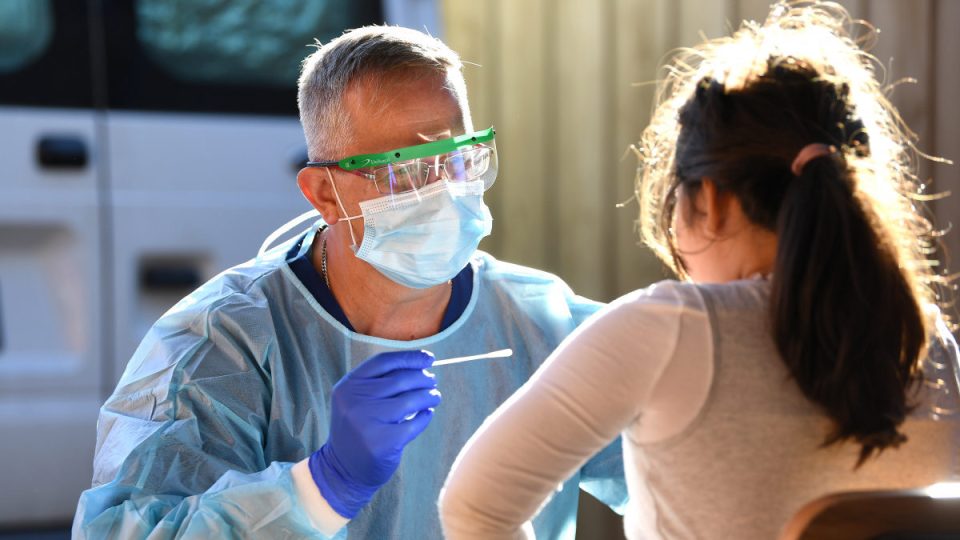 Victorians are being urged to keep getting tested if they have virus symptoms. Photo: AAP

The state had 70 more COVID cases on Tuesday, its lowest daily tally in since early July.

But it came as the number of Victorians getting tested for the virus fell to 10,153, its lowest level since June 23.

At the peak of Victoria’s second wave, when 725 new infections were reported on August 5, there were 24,000 tests.

“We need everyone who has compatible symptoms … to step up for testing.

“If we know where every case in Victoria is today, we could end it in a week.”

Professor Sutton said low infection numbers – as Victoria was starting to see – could “cause complacency for people who think they don’t need to test, but testing is the pathway to drive numbers down”.

“If we don’t know that there are cases in the community, if we can’t identify people and they’re not aware themselves, then they’re going to put their close family and other close contacts at risk.”

There were also five more COVID fatalities on Tuesday, Victoria’s lowest daily tally since mid-August. They were all women, aged from their 70s to their 90s, and all linked to aged-care outbreaks.

Premier Daniel Andrews revealed there would be two plans for Victoria beyond Melbourne’s six-week Stage 4 shutdown and the Stage 3 restrictions in regional areas.

Both plans will be outlined on Sunday. Victoria’s restrictions are scheduled to end on September 13, although there has been no final confirmation of that yet.

Mr Andrews, who also urged Victorians to keep presenting for virus testing, said each plan would have different rules and several stages.

“We’ll have to add to that and fill in some of the detail around that – not based on what we hope but on what the data tells us as we get case numbers each day each week, right throughout the year,” he said.

“But you’ll never get to that position and, in fact, you’ll just fritter away all the good work that Victorians have done, if you don’t properly defeat the second wave. And not just pretend you’ve done it but actually do it.

“That’s why very low [infection] numbers, and those low numbers being locked in for a period of time – not one day at a low number but a clear pattern – that’s what’s essential.”

Mr Andrews said results for most virus tests in Victoria were now available within a day.

“We’ve got to keep it going. Any symptoms whatsoever, please come forward as soon as they present. Get tested. Isolate for, on average and sometimes even better than that, only one day,” he said.

Professor Sutton predicted Victoria’s daily case numbers would be at 40-50 by the end of the week.

“It will be lower again the following week but exactly where we’ll be, you know, I think it’s… You get called out if you give a single number and you should be, because you’ll be wrong,” he said.

However, he remained concerned about community transmission of the virus.

“There is always that paradox – as numbers go down, as people feel safer, as people feel like there’s not much transmission out there, even though it’s still there, they may not be stepping up for testing,” he said.

‘It is a concern if testing numbers were to continue to drop, because it’s one of our really significant tools in managing this.”

Elsewhere, the state government has secured the support of crossbenchers to extend its state of emergency by six months, with the temporary return of Greens upper house MP Samantha Ratnam from maternity leave to vote in favour of an amended bill on Tuesday.

Without an extension, the state of emergency will expire on September 13, along with the separate Stage 4 lockdown and and Stage 3 rules.

Ms Ratnam said she hadn’t been intending to attend parliament but wanted to vote on the “really important piece of legislation”.

That means the Andrews government has the support it needs to pass the bill in the upper house, though debate is expected to run for hours on Tuesday.

Earlier, Reason Party MP Fiona Patten and Animal Justice Party MP Andy Meddick said they would back the extension, despite a torrent of abuse from people opposed to the move.