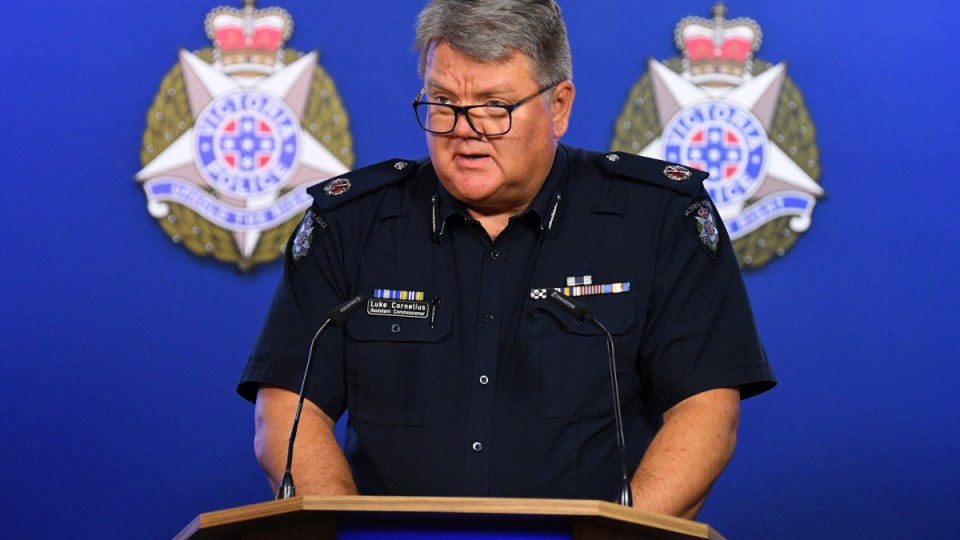 Assistant Commissioner Luke Cornelius said police were sick of dealing with “so-called sovereign citizens” and the “tin-foil hat” brigade, who are against masks and vaccinations and believe 5G causes coronavirus.

A clearly frustrated Mr Cornelius spoke out after a 76-year-old man was arrested and charged with incitement on Friday, after a police investigation into a planned rally against Melbourne’s Stage 4 virus restrictions.

“Participating in this proposed protest would be a serious and blatant breach of the chief health officer’s directions and it jeopardises the health of the entire community,” he said.

Mr Cornelius said the protest, planned for September 5, carried a serious risk of undoing the hard work of the vast majority of Victorians through weeks of restrictions.

“The tinfoil hat-wearing brigade are alive and well in our community,” he said.

“They’re taking every opportunity to leverage the current situation to serve their own ridiculous notions about so-called sovereign citizens, about constitutional issues and about how 5G is going to kill your grandkids.”

Police have also been cracking down on a daily protest in suburban Melbourne, with hundreds of people gathering in and around a reserve in suburban Dandenong.

Since Monday, police have made nine arrests and handed out 48 fines at the Dandenong protest.

Mr Cornelius said people were trying to play the “innocent card” when approached by police and wasting their resources.

“That’s why this behaviour is so selfish,” he said.

The protest is also illegal under Melbourne’s lockdown.

The police frustration came as Victoria’s chief health officer Brett Sutton said he expected daily COVID cases to fall below 100 next week – and possibly even as soon as this weekend.

Victoria had 113 new coronavirus infections on Friday, the same number it had on Thursday but continuing a solid downward trend.

Friday is the state’s sixth day with new cases below 150.

Professor Sutton said the rate of infection growth was “clearly still trending in the right direction” to soon fall below the psychological barrier of 100 cases a day.

“I do expect that to happen, if not over the weekend, by next week if trends continue,” he said on Friday.

But Victoria’s death toll shows little sign of slowing, with 12 more fatalities on Friday. They were a man in his 70s, two women and one man in their 80s, and five women and three men in their 90s. All were linked to outbreaks in the state’s aged care homes.

Victoria’s virus toll has risen to 496, while the national toll is 584.

There are still 513 COVID patients in the state’s hospitals, including 29 in intensive care.

However, Professor Sutton said there were fewer active outbreaks in aged care homes, which was helping to stabilise infection numbers.

“I think it can be a while before we see the daily mortality figures come down, but it is stabilising,” he said.

“We are not seeing it increase, and I’d expect it to slowly decrease.”

Active virus infections have halved across the state in the past fortnight, and have fallen particularly fast in regional Victoria. That has prompted anticipation about when Melbourne’s Stage 4 restrictions and the Stage 3 rules for country areas might end – and how.

Premier Daniel Andrews, who has been under pressure to outline Victoria’s economic recovery and the lifting of restrictions, acknowledged the delay in revealing a clear plan was “deeply frustrating”.

“The way I’d put it is, that at 113 cases, this is very much like a public health bushfire and we’re getting close putting it out,” he said.

“If we were to reopen at 113 while the fire’s still going – not smouldering, actually still burning – then it would only be a matter of time before it got away from us again.

“We need to put the thing out, get it down to such low levels that we can sit on it, we can absolutely make sure we’ve got confidence that we can contain it.”