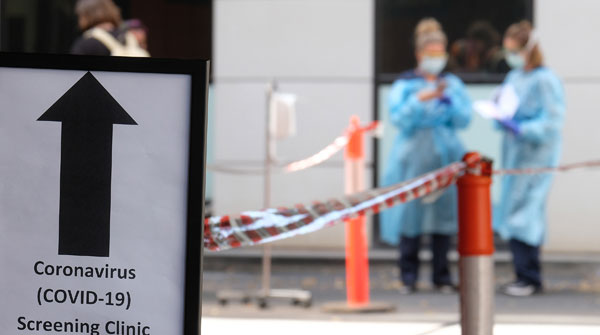 Victoria has recorded 182 new coronavirus cases and a further 13 people have died.

For the second day in a row, the number of new cases in Victoria is below 200.

In Brisbane, children as young as 13 have been locked down in their rooms in a detention centre and are expected to stay isolated for 14 days as as authorities grapple with an outbreak.

The figures released on Saturday take the national toll to 485 and the state death count to 398.

New infections in Victoria dipped below 200 on Friday for the first time in more than five weeks.

All but three of the deaths were linked to aged care outbreaks.

Tough lockdown restrictions including a curfew remain in place across Melbourne until at least September 13.

Chief Health Officer Brett Sutton has stated enforced face masks will remain part of life in the state’s capital for some time after  restrictions ease.

“Masks will need to be part and parcel of our lives for some time after stage four (restrictions),” Dr Sutton said.

Dr Sutton acknowledged the downward trend is promising, but restrictions won’t be lifted in full until community transmission is eradicated in the state.

“If we’ve got no community transmission whatsoever, then I’m not going to be recommending masks beyond that… if we can get there.,” he said.

“There are other levels that we can get to where maybe we don’t require masks in all settings at all times, in the way that it’s recommended at the moment.”

While lockdowns were reducing general community transmission it was outbreaks in aged care and disability that remained a challenge, Dr Sutton added.

“They might end up with a baseline level of transmission that is harder to shift,” he said.

Premier Daniel Andrews agreed and said it was “way too early” to talk about when and how Victoria’s restrictions might be eased.

Magda Szubanski, Tayla Harris and Waleed Aly are amongst a host of well-known faces in the new ads.

Sharon Strzelecki, also known as comedian Magda Szubanski, is one of many well-known personalities and sports stars who are involved in a new COVID-19 messaging campaign.

“[He suggested] we use some really well-known Victorians … even though this is a challenging time, some humour is a very good thing to just try and remind people that we all have a part to play.”

There are more than 1600 active cases across 129 aged care sites. The 10 most infected facilities have between 107 and 209 cases each, according to government data.

More than 600 people remained in hospital on Saturday, with 22 of the 36 people in intensive care requiring ventilation.

The Premier urged Victorians not to waver in their lockdown efforts, saying the state was not even halfway through an “ultra-marathon”.

The state’s inquiry into the hotel quarantine scheme on Friday heard from a security supervisor that he “had to keep an eye on” a couple of guards to ensure they didn’t leave their posts, fall asleep or spend too much time on their phones.

He had assumed they were fired, but later discovered they had been moved to a different hotel.