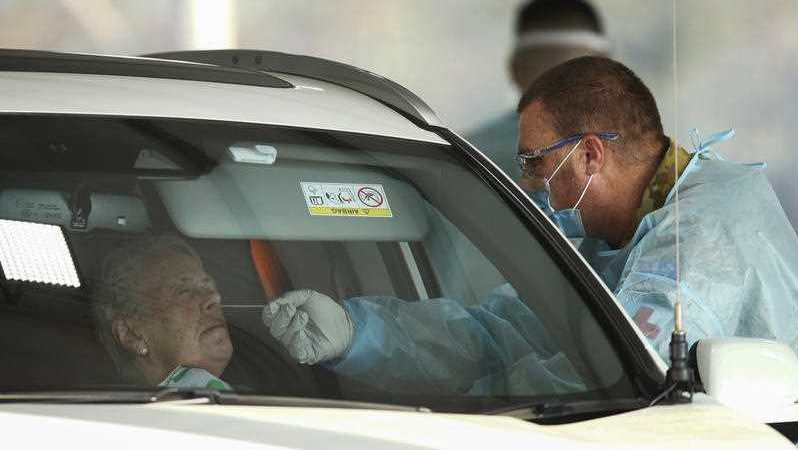 Victoria’s premier has issued a grim warning, even as the state’s daily coronavirus infections fall to their lowest levels in a month.

Victoria reported 222 more COVID cases on Tuesday – its lowest since 217 on July 18.

Despite 17 more fatalities added to the state’s growing toll, Tuesday’s figures were widely applauded as the best indication yet that Victoria’s tough six weeks of restrictions are beginning to have an effect.

Victoria’s COVID toll rose to 351 with the deaths of 10 men and five women, aged from their 60s to their 90s, confirmed on Tuesday.

Premier Daniel Andrews was also quick to sound a note of caution after noting an alarming drop of 30,000 (17 per cent) in the numbers of people getting tested for the virus in the past week.

“What we’re all trying to avoid here, is the case numbers come down to a point where we start to think about opening up and what that will look like – only to be unable to do that because the test numbers are too low for us to have clarity about just how much virus is there,” he said.

“It seems logical that there would be less testing [because of restrictions on movement] but not this much less.

“I know we’re asking a lot of Victorians at the moment, but if I just simply say to each and every Victorian – if you have any symptoms at all, please come forward and get tested.”

Victoria has tested up to 34,000 people on some of its busiest days in the pandemic. But in recent days, demand at some testing sites has fallen by up to 40 per cent.

The state’s chief health officer, Brett Sutton, was also optimistic about the lower infection numbers. Victoria still has 7274 active COVID cases – but that has dropped by 600 in just two days.

“We shouldn’t hang everything on a single day’s result but overall the trend is good,” Professor Sutton said.

Victoria’s daily cases have been in the high-200s for three days – well short of the peak of 725 on August 25. Professor Sutton said he expected the steady fall to continue.

“I would hope that we are in the hundreds, not in the 200s, next week but it all depends on everyone doing the right thing, including stepping up for testing,” he said.

Elsewhere, the judicial inquiry into the state’s bungled hotel quarantine program heard that about 90 per cent of Victoria’s current COVID-19 cases could be traced back to a family of four.

“Approximately 99 per cent of current cases of COVID-19 in Victoria have arisen from Rydges or Stamford,” Dr Alpren told the state’s hotel quarantine inquiry on Tuesday.

“However, I cannot be very precise in the number or proportion to have arisen from each outbreak separately.”

Dr Alpren said the Rydges outbreak started with a family of four who returned from overseas on May 9 and moved into the hotel on May 15 after displaying coronavirus symptoms.

By May 18, all four had tested positive.

A week later, a hotel staff member and two security guards were diagnosed with COVID-19.

It is not clear who was the first of the three to contract the virus.

By mid-June, a total of 17 workers at the hotel and their close contacts had tested positive.

In his witness statement, Dr Alpren said the family was “approved to walk outside their room, during which time they were accompanied by security guards”.

Nursing staff also visited their room on May 18 after a contamination issue.

But no cases have been identified from either of the events, Dr Alpren said.

“Transmission could have occurred directly from the family to staff or through contamination with virus of surfaces in the hotel with which staff then had contact with,” his statement reads.

Another outbreak also emerged at the Stamford Plaza. It was traced back to a man who returned from overseas on June 1 and a couple who returned on June 11.

A worker at the Stamford Plaza was the first to show symptoms on June 10 and tested positive on June 14.

Dr Alpren said the department had seen “no evidence of any other transmission” outside the hotels, excluding three exceptions.

On Monday, infectious disease expert Professor Lindsay Grayson described advice on personal protective equipment given to security staff at the hotels as inappropriate and inaccurate.

He said security guards should have been wearing eye protection, gloves, gowns and mask when interacting with returned travellers or handling objects belonging to them.

The inquiry continues on Thursday, when hotel guests and workers will give evidence.