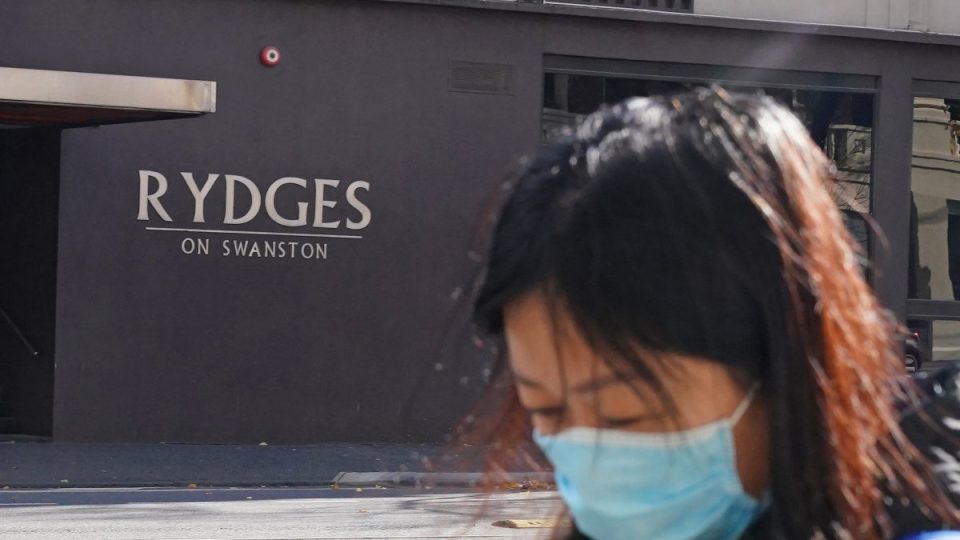 The inquiry will examine how the virus leaked from Melbourne's hotel quarantine program. Photo: AAP

Victoria’s hotel quarantine program was thrown together in 48 hours, with a muddled chain of command and confusing training for security guards, an inquiry has heard.

Professor Lindsay Grayson, head of infectious diseases at Austin Health, told the judicial inquiry into the botched scheme that the half-hour training module developed by the federal government was better suited to the public.

“I would describe this document as confused in its target audience,” he said on Monday, the first day of public hearings in the Victorian inquiry.

Professor Grayson pointed to a section in the module that said mask use was not required.

That was true for the public at the time, but not for healthcare workers or quarantine staff.

“Clearly this is misleading for healthcare workers or quarantine staff if they thought they didn’t need to wear a mask, when I would consider it crucial if they were in likely contact with a potentially infectious patient,” he said.

“When it came to the crucial section about PPE, there was no advice.”

He also told the inquiry that using PPE without proper training could increase the risk of spreading the deadly virus.

Outbreaks among staff and private security guards are believed to be responsible for the state’s second wave of coronavirus, which has cost hundreds of lives and led to the nation’s toughest lockdown.

In late May, when the virus first broke out of hotel quarantine, 19 people in Victoria had died from COVID-19.

On Monday, Victoria set a grim record for virus fatalities, reporting 25 more that took its toll from the pandemic to 334. It also had another 282 confirmed infections, with a Melbourne-wide shutdown near the end of its second week.

Senior counsel assisting the inquiry Tony Neal QC said the hotel quarantine program was set up in 48 hours and was without “precise lines of responsibility, control, supervision and management”.

He said “steps were set in train” for the program at a meeting at the Victorian State Control Centre on March 27. The first arrivals were expected on March 29.

Mr Neal said the program “fell short of its goal” of preventing returned overseas travellers from spreading COVID-19 to the community.

“There is material suggesting for some participants in the program, it was not clear who was in overall command of the operation,” he said.

“From the very beginning it seems there were multiple and potentially overlapping areas of responsibilities between departments.”

Mr Neal said the state Department of Jobs, Precincts and Regions was tasked with finding hotels and hiring private security to oversee the program. The Department of Health and Human Services and other government agencies were also given responsibilities.

“The evidence you will hear in this inquiry will raise questions as to the clarity of the roles of those individual agencies,” Mr Neal said.

“From the beginning, it seems there were multiple and potentially overlapping areas of responsibility between the departments.

“Evidence will be called in due course about the roles that some departments envisaged playing … and how they differ from the roles that they actually played as the program commenced.”

He said the inquiry would also focus on the decision to use private security guards instead of the Australian Defence Force and Victoria Police.

Mr Neal confirmed government ministers would be called to give evidence to the inquiry before it delivered its findings on November 6.

Premier Daniel Andrews said he was yet to be called to appear.

International flights are being diverted away from the state while Corrections Victoria has taken over quarantine operations.

Meanwhile, an application by Opposition Leader Michael O’Brien to appear at the hearings was rejected by the inquiry head, retired judge Jennifer Coate.

Mr O’Brien had submitted he had a “direct or special interest” in the probe on behalf of Coalition voters, and that his participation would “enable a different voice to be heard”.

In her ruling, dated August 12 but posted online on Monday, Justice Coate rejected Mr O’Brien’s arguments and defended the independence of her inquiry.

“The subject matter of this inquiry is of enormous significance to all of the people of Victoria. It will be conducted on behalf of all Victorians,” she wrote.