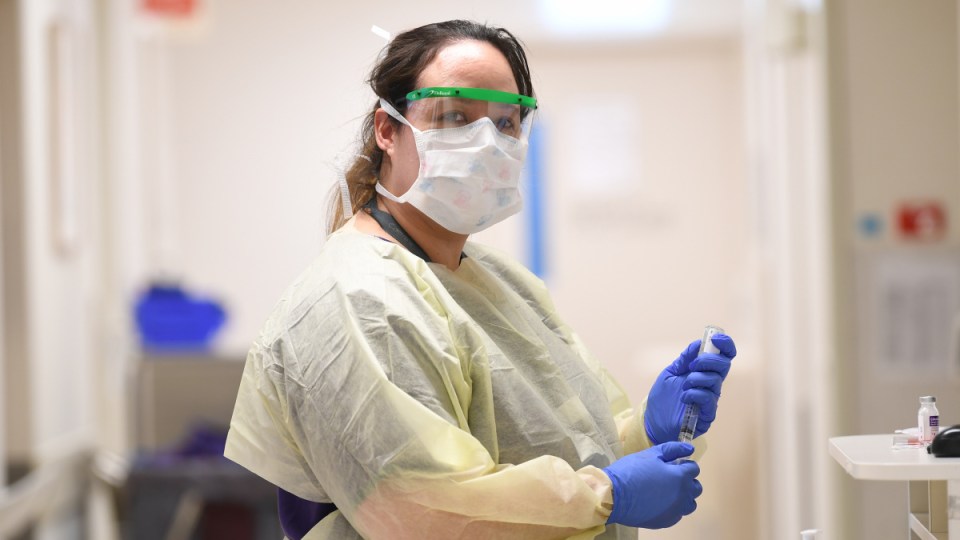 Many Victorian nurses struggled at the height of the state's second wave. Photo: AAP

Victoria’s chief health officer has spoken of his concern as nearly 1000 of the state’s healthcare workers test positive for the coronavirus.

Professor Brett Sutton said the situation with sick staff across the state’s entire health system was being managed.

“In terms of the stresses and strains on staffing, it is not insignificant. That especially applies in aged care.”

There are 911 active COVID infections in Victorian healthcare workers – a rise of 139 since Thursday. Most are in nurses, aged-care and ancillary staff, rather than doctors.

Professor Sutton said that probably related to how closely nurses interacted with people in their care.

The sick healthcare workers are among more than 7600 active coronavirus cases in Victoria.

The state confirmed another 450 COVID infections on Friday.

Premier Daniel Andrews said seven of the deaths were linked to aged care.

Victoria’s toll from the pandemic has risen to 181, while the national toll is 266.

There are 607 COVID patients in Victorian hospitals. Of those, 49 patients are in intensive care, with 28 are on ventilators.

Victoria’s mystery cases – those where the origin of the infection cannot be traced – fell to 60 on Friday, from more than 100 on Thursday. Professor Sutton said that number should continue to fall over time, as outbreaks were brought under control.

“When you see the healthcare worker numbers that are new every day, when you see the outbreaks that are occurring every day, they have essentially started from a community member who’s brought it into a setting where an outbreak has been allowed to occur,” he said.

“As community cases decrease, we will see that decrease in outbreaks. We’ll see a decrease in that last line of defence in our healthcare workers.”

Melbourne is just days into a six-week lockdown of all but essential businesses, aimed at quelling the deadly coronavirus outbreak. Regional Victoria will also be under Stage 3 restrictions until at least the middle of September.

But Professor Sutton refused to be drawn on when the effect of keeping millions of people at home would show up in reduced daily infections.

“Crystal ball-gazing is not a particularly useful exercise,” he said.

But, despite Victoria’s daily infection numbers continuing to fluctuate by hundreds every day – including hitting a record 725 on Wednesday – he said there had been some stabilisation in new COVID cases.

The overall trend was 400-500 confirmed infections every day.

“We do expect, within 14 days of a really significant intervention, that we’ll see a change in numbers,” he said.

“Certainly, 14 days from the really widespread implementation and the behaviour change that happens with Stage 4 restrictions, we’ll get a different average daily numbers I would expect.

“Again, it will go up and down on a day-to-day basis, but within two weeks I would expect it.”