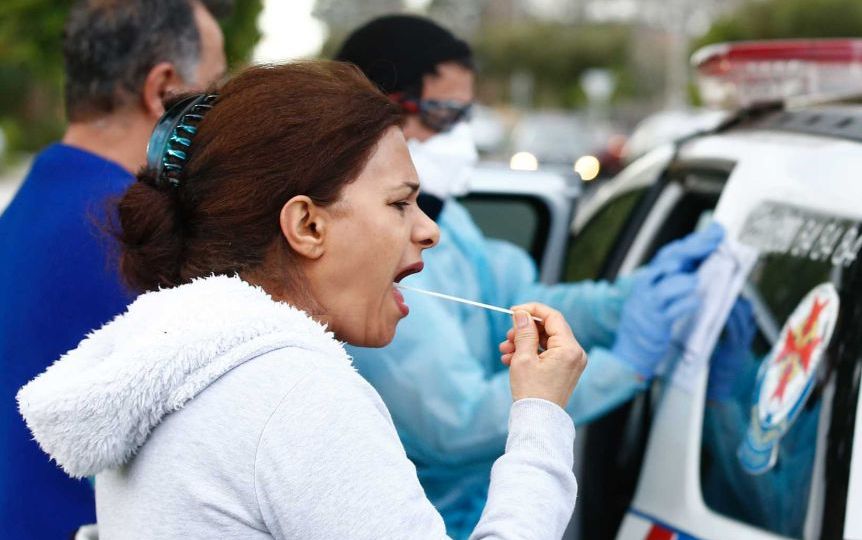 Close to 1.2 million COVID-19 tests have been carried out in Victoria since January. Photo: AAP

Two weeks on from stage three restrictions being reimposed in 36 Melbourne suburbs, experts say the coming days will prove critical in determining whether stricter lockdown measures are working.

After outbreaks in June, 10 “hotspot” postcode areas in Melbourne’s north and west were placed into lockdown for the second time, before the rest of the metropolitan area and the Mitchell Shire were also subjected to the rules last Wednesday.

On July 1, Victoria was dealing with 370 active COVID-19 cases. By yesterday, the number of active cases had jumped to 1,931, fuelled by outbreaks linked to public housing towers, a school, aged care centres and several workplaces.

New detections of COVID-19 have been between 200 and 300 for four of the past five days.

Jodie McVernon, the director of epidemiology at the Doherty Institute, said the relative stability in new cases was encouraging.

“We know that infections that were made before [last Wednesday] will continue to appear over the next one to two weeks, and the fact that they’re not continuing to escalate I think is a very reassuring sign at this point,” Professor McVernon told RN Drive.

Another epidemiology expert, Deakin University’s Catherine Bennett, said the success of postcode lockdowns, and subsequent restrictions around the city, should not be judged purely on new case figures.

“The numbers might stay the same. It’s really what’s behind that and what [the Government’s] concerns are in terms of weak points we have, where there’s the potential of too much transmission to fully contain this,” Professor Bennett said.

“The proportion that is linked to known or already-contained outbreaks, that’s what you want to see rising.”

‘The next few days are going to be telling’

Professor Bennett said it was difficult to analyse how out of control community transmission had become because the Department of Health and Human Services (DHHS) did not provide a breakdown of whether new cases had been identified through contact tracing or routine testing.

“The next few days — maybe out to five days — are going to be telling,” she said.

On Wednesday, Victorian Chief Health Officer Brett Sutton said while there was no guarantee of a drop-off in cases, “we should see it by the end of this week”.

“It will absolutely be a reflection of how well people are doing the right thing,” Professor Sutton said.

“That means if there are people who are still seeing others, who are going out for non-essential reasons … we won’t see it decrease.

“We’ll see it carry on like this with the potential for outbreaks and explosive increases in cases.”

Where to now for Victoria?

Professor Sutton said the second wave of infections had been “trickier” than the first spike in cases in March, which mainly involved international travellers who were easy to trace.

Premier Daniel Andrews has warned further restrictions could be enforced if transmission rates do not reduce, but both he and Professor Sutton have not publicly released any benchmarks for what might trigger “stage four” lockdowns.

While some experts have called for harder lockdowns and a switch to an “elimination” strategy, not all agree it is the best way forward.

“The costs socially, economically and everything else are substantial and I don’t think it guarantees we’re not going to get a problem again in the future.”

Professor McVernon said the decision to impose any lockdown was “a very challenging tipping point”, but said the strategy had proved an effective tool in stopping the spread of the virus.

Professor Bennett said it was likely the Victorian Government would consider “a combination of things” before tightening restrictions, including transmissions in the newest clusters.

She called for more testing to be made available to asymptomatic people who could be considered “potential accelerators” or “incubators” due to their links with existing cases.

“There’s a range of things that could be done to tighten up what we have and address areas of vulnerability, perhaps before we have to think about shutting everything down,” she said.

With the exception of those living in the original 10 lockdown postcodes and a few select suburbs where a “suburban blitz” is occurring, routine tests are only being carried out on people who are displaying symptoms of COVID-19.

So far, the Victorian government said it had completed close to 1.2 million tests since January, resulting in close to 4,500 positive cases being returned.