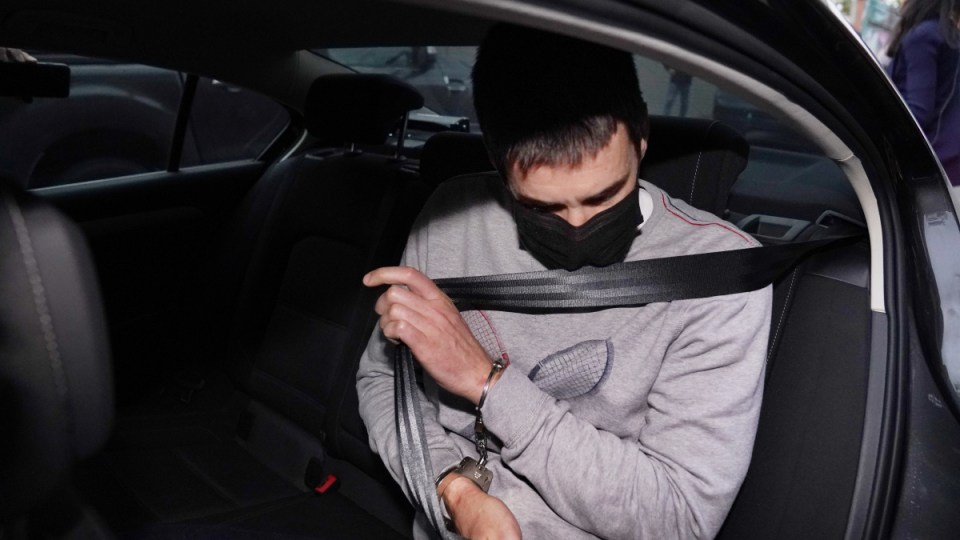 Richard Pusey is accused of fleeing a crash scene told one of four dying police officers that he'd just "wanted to go home and have sushi", a court has heard. Photo: AAP

An accused drug-driver allegedly told a police officer “amazing, absolutely amazing” as she lay dying after a truck ploughed into her and three colleagues on a Melbourne freeway.

Richard Pusey, 41, had been pulled over after allegedly speeding at 140km/h on the Eastern Freeway on Wednesday and tested positive to ice and cannabis.

He was urinating on the side of the freeway when a truck driver veered into the emergency lane and hit the four officers who were impounding Mr Pusey’s black Porsche, police said.

One of them, Leading Senior Constable Lynette Taylor, could be heard calling for help before Mr Pusey allegedly began filming the graphic scene.

He is accused of walking up to her as she was pinned down by the truck and saying: “There you go. Amazing, absolutely amazing”.

“All I wanted was to go home and have my sushi and now you’ve “f—ed my f—ing car,” Mr Pusey allegedly said as Senior Constable Lynette Taylor continued to groan, Melbourne Magistrates Court was told on Friday.

The officer and three of her colleagues, Senior Constable Kevin King and Constables Glen Humphris and Josh Prestney, died at the scene, with Pusey accused of fleeing.

He allegedly told a witness who stopped to help “that’s my f—ing car mate” and is then accused of asking one person for a ride to his home in Fitzroy.

There is no evidence Mr Pusey himself posted photos of the crash to Facebook, police told the court.

The mortgage broker is said to have called his wife and told her what he had seen while being given a lift to Fitzroy, and also spoke to his doctor about it.

Mr Pusey then allegedly called a federal police officer he knew, told her about the crash and sent her video, and also sent pictures of the crime scene to a witness, joking that he was hoping to get out of the fine.

The 41-year-old told police he appreciated the fact they wanted him to come in for an interview but said he could not do that, before being arrested on Thursday.

He is charged with numerous offences, including driving at a dangerous speed, reckless conduct endangering life, failing to render assistance and drug possession.

Mr Pusey is also charged with the destruction of evidence. He is alleged to have removed two iPhones from his Porsche after the crash and recording the scene.

Other charges including failing to remain after a drug test, failing to exchange details and three counts of committing an indictable offence while on bail.

Police informant Aaron Price observed a moment of silence during the court hearing for the four officers killed.

The driver of the truck that ploughed into the group suffered a medical episode following the crash, blacked out and remains in hospital under police guard.

He has not been charged.

Mr Pusey did not apply for bail and has been remanded in custody for a committal mention on July 16.