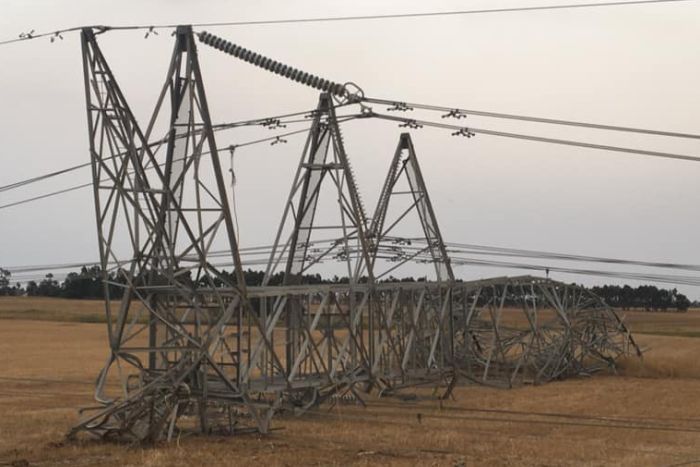 “Life-threatening flash flooding” has been forecast for large parts of Victoria today as the state barely recovers from a hot, humid, and windy night that brought down transmission towers.

Late in the evening, a fire burning at Cape Conran in East Gippsland was downgraded from emergency to watch and act level, with fires at Wulgulmerang and Bendoc also at watch and act.

The humidity quickly rose and severe thunderstorms swept through Melbourne in the early evening, knocking down a significant number of trees, damaging homes and powerlines and causing traffic hazards primarily around Frankston but also Geelong, Horsham and Bendigo.

An SES spokesperson said about 300 incidents were reported statewide.

Extremely high power demand related to the heat and multiple generation outages caused problems for the energy network overnight, with more than 20,000 properties across the state affected by blackouts.

Supply to the Portland smelter, the biggest energy user in the state, was affected.

Elton John’s show at Rochford Wines in the Yarra Valley was cancelled 95 minutes into his set after heavy rain struck the stage damaging musical instruments and monitors.

There are no emergency warnings in place for fires across the state but its expected to be a challenging day for fires with temperatures reaching the 40s in East Gippsland with little rain.

There are currently four watch and act warnings in place for fires in East Gippsland and the fire danger is very high.

More wild weather on its way

A severe thunderstorm warning for Victoria was downgraded on Saturday morning but a severe weather warning is still in place for heavy rainfall and flash flooding expected to hit western and central Victoria.

Intense rainfall is forecast to lead to “life-threatening flash flooding” with rainfall totals of between 20 millimetres and 50mm expected and isolated falls of up to 100mm possible in Horsham, Warrnambool, Seymour, Maryborough, Ballarat, Geelong, Melbourne, Wonthaggi and Bacchus Marsh.

A cool change has begun moving across the state from the south-west and is expected to hit Melbourne late this afternoon.

“The rainfall further east will be much more isolated but temperatures there will rise today into the 40s,” Mr Carlyon said.

“The bulk of the heavy rain will be in the west, the rainfall will be lightest in East Gippsland where there are several ongoing fires.”

Amid the high fire risk across the state, the roof of a building at Sandringham Primary School in Melbourne collapsed after a large fire early this morning.

Forty firefighters responded to the blaze which started shortly before 4:20am in Bamfield Street and was brought under control by 6:15am.

The fire threatened other buildings but it is not clear at this stage how it started.

Emergency officials on alert for fire risk
Steve Chircop, who lives at Smythesdale near Ballarat, was able to save his neighbours’ home when a fire broke out during the hot weather.

Mr Chircop left work early because of the heat and was checking his dogs when he saw the grassfire.

“It went from the size of a small kids’ pool to the full paddock in 30 seconds,” he said.

“By the time I got off the phone to triple-0, it was going for kilometres. It was that quick.”

When the fire spread quickly towards a neighbour’s home, Steve and other locals soaked the house with water from homemade carts.

Firefighters were able to slow the spread of the fire and authorities downgraded their warning to advice level.

While the fire at Bendoc in East Gippsland was on Friday evening downgraded to watch and act, it had flared up earlier, triggering emergency warnings.

Andrew Nixon, a spokesman at the Orbost incident control centre, this morning said more than 100 Victorian firefighters were working on the fire plus personnel from nearby NSW.

“There’s a lot of heavy smoke in the air this morning,” he said.

“That may reduce our ability to have any air operations over the fire.”

The fire is closest to Bendoc Upper where there are about half a dozen houses.

Mr Nixon said the fire is still about 12km east of the much larger community of Bendoc, which has more homes, a pub, general store and post office.

“We’re pretty confident that if that fire does move to the west of Bendoc that we have the resources to deal with that,” he said.