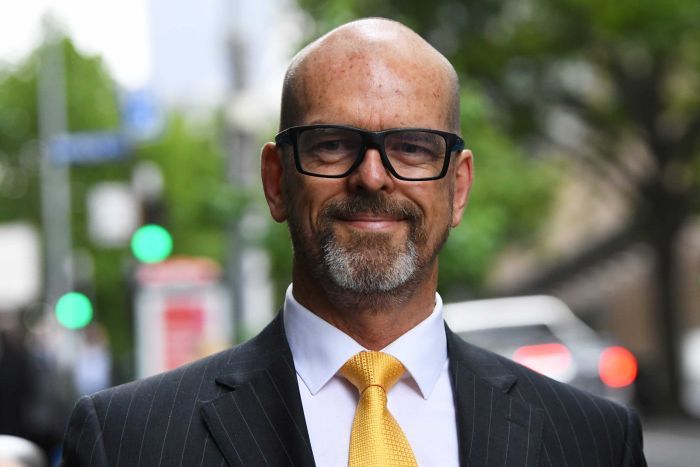 Former Victoria Police chief commissioner Simon Overland has told a royal commission he did not know Nicola Gobbo was informing on her clients, in breach of her legal obligations to them, as his investigators never told him.

On the stand for his first day of questioning at the Lawyer X royal commission, Mr Overland said he was not part of a 2005 plan to sign up Nicola Gobbo as a human source.

He said he was surprised and concerned when he discovered shortly afterwards that she had been registered as an informer.

Mr Overland — the assistant commissioner in 2005 — set up the gangland Purana Taskforce and is credited with bringing an end to Melbourne’s gangland war.

By the time Ms Gobbo was signed up for her third, and most prolific, stint as a police informer in 2005, she had been acting for Tony Mokbel for three years.

Ms Gobbo would be used extensively by police to bring down Mokbel’s drug cartel.

However, Mr Overland told the commission today he did not know Mokbel was one of her clients until the end of 2005.

“At no time was I made aware that she was breaching legal obligations — if I had been I would have taken action,” Mr Overland said.

But he said he never got assurances that she was not passing on information about her clients, or sought legal advice about her use.

He told the commission the “sterile corridor” meant he was not part of her management and information he received came from his investigators.

Mr Overland stated he would have “brought it to an end” had he been told she was informing on her clients.

While the architect of the Purana Taskforce, Mr Overland submitted he was not intimately aware of murder investigations that would have revealed Ms Gobbo was representing a number of criminals she was informing on.

This included that of Jason Moran and Pasquale Barbaro — who were publicly murdered at a children’s football clinic in a double murder Carl Williams later pleaded guilty to.

Mr Overland said the major targets of the Purana Taskforce were not always passed on to him.

“It may have been, it may not have been,” he said.

The lower ranks of police have previously told the commission their use of Ms Gobbo was sanctioned by police command, and evidence suggested it went all the way to Mr Overland as the then-assistant commissioner of crime.

Mr Overland said he felt at the time that Ms Gobbo’s role as a human source should be “short-term” with an “exit strategy” developed to allow her to live a normal life afterwards.

“I thought the longer she stayed a human source with Victoria Police the greater the risk to her,” Mr Overland told the commission.

However, Mr Overland said his assessment at the time was that it was likely Ms Gobbo would have been killed anyway.

He said she had put herself in a position where “her life was under serious threat” as she had crossed boundaries and as Mokbel’s lawyer was facilitating his drug network.

“She was in serious difficulty when she came to us,” Mr Overland told the inquiry.

“I did consider whether that was an appropriate thing to do. But I thought the alternative of leaving her out where she was was worst because I thought in all likelihood she’d get killed.”

In 2009, when he was deputy commissioner, Mr Overland pushed for Ms Gobbo to be made a witness over the murder of Terence Hodson and his wife Christine.

The inquiry previously heard her police handlers disagreed with the move and drew up a briefing note outlining concerns that Ms Gobbo’s exposure as a human source would risk convictions and damage Victoria Police’s reputation.

Mr Overland told the inquiry he did not recall seeing the briefing note.

Counsel assisting, Chris Winneke, asked him if he had ever raised organisational risks with his boss, then-chief commissioner Christine Nixon.

“Is it your belief that you did not inform chief commissioner Nixon about the use of Ms Gobbo as a human source?” Mr Winneke said.

“I don’t have a recollection either way,” Mr Overland said.

Mr Overland said he never took notes or made diary entries about Ms Gobbo, which was a common practice by police command who worried her use would become known.

Both Chief Commissioner Graham Ashton and Assistant Commissioner Luke Cornelius told the inquiry they did not take notes regarding Ms Gobbo.