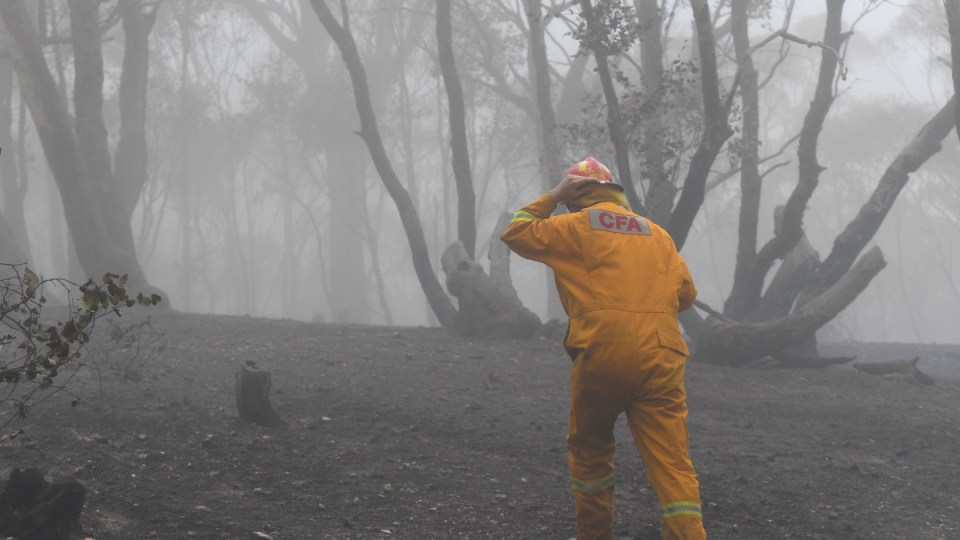 Victoria's CFA says Monday will be a danger of high fire risk in the state's far north-west. Photo: AAP

Extreme heat in Melbourne will peak about 6pm on Monday as Victoria’s north deals with a total fire ban and extreme bushfire danger ratings.

Families have been warned to stay in touch with older people, with Melbourne due to hit 38 degrees about dinner time.

Victoria Police also warned people not to leave children locked in cars as the temperature soared.

A cool change later on Monday will mean temperatures drop 10-15 degrees within minutes as south-westerly winds bring cold air from the southern oceans.

“We are forecasting severe to extreme fire danger across the Mallee, the Wimmera and the Northern Country districts for today. The CFA has issued total fire bans for those three districts,” Bureau of Meteorology senior forecaster Tom Delamotte said.

“We are expecting probably the strongest winds for the Melbourne area to be with that cool change when it comes through later today.”

“It is normal to see spikes in temperatures through December, around three out of every four Decembers over the past 20 years have seen temperatures in excess of 38 degrees for Melbourne,” Mr Delamotte said.

🔥Does this really need to be said? Apparently so. 🔥

Do NOT leave your children or pets locked inside a car, particularly on a 38-degree Total Fire Ban Day. Officers in the Greater Dandenong Police Service Area have already received calls. pic.twitter.com/7eJfoKj07j

The CFA issued a watch and act alert for a fire at Buchan, in far eastern Victoria, at 1pm on Monday.

🚫🔥Today Monday 9 December is a day of TOTAL FIRE BAN in the Mallee, Wimmera & Northern Country regions – no fire can be lit in the open air until 11:59pm tonight.
It's important throughout summer you know the Fire Danger Ratings for your area – visit https://t.co/1Od0EOGYmu pic.twitter.com/vxPBlmYcgP

Council on the Ageing Victoria issued a red alert on the dangers of heat for older Victorians.

“Living alone means there is no one to monitor their condition on how they are coping with heat stress,” chief executive Tina Hogarth-Clarke said.

“Especially if there are blackouts for extended periods leaving residents in an increased stressful situation with no air conditioning or refrigeration.”

Ms Hogarth-Clarke said it was important for families and neighbours to keep in touch with older members of the community on days of extreme temperatures and it was vital to plan to keep cool.

“That holiday period that everyone wants to be nice and sunny and warm and everything, it is looking warmer than average, but only by a little bit,” he said.

“Only a degree or so above average during the fortnight around Christmas.”

Worst still to come on day of heat, fire danger for Victoria