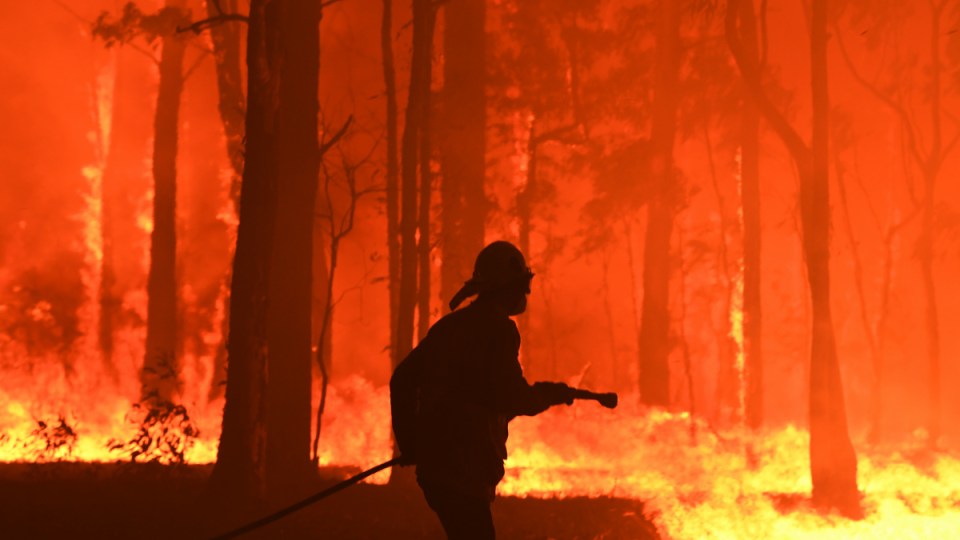 Victorian authorities have issued a code red alert for Thursday to avoid the terrible NSW fires such as the Gospers Mountain blaze. Photo: AAP

A pre-summer heatwave has Victoria ready for Code Red bushfire conditions in the north as well as a state-wide total fire ban on Thursday.

Overnight temperatures are forecast to stay at 30 degrees Celsius and northerly winds will hit high speeds to put the Mallee and the Northern Country districts on a Code Red alert.

Residents in northern Victoria will swelter through temperatures over 40 degrees, and Emergency Management Victoria recommended regional populations move to their nearest city centres.

Code Red signals the worst possible bushfire conditions and the safest place to be is away from high-risk fire areas within those districts, the CFA advised.

“Our message to community members in these areas is that leaving high bushfire risk areas tonight or early tomorrow morning is the safest option,” Emergency Management Commissioner Andrew Crisp said on Wednesday.

As a result of the predicted conditions, some schools and early childhood centres will be closed in some districts and community services may not be available.

All public parks in the Code Red areas will be closed.

“Homes are not built to withstand the types of fires we may see on a Code Red Day and you don’t want to be caught travelling through areas on fire at the last minute if you wait and see,” CFA Chief Officer Steve Warrington said.

Along with possible bushfires, the National Asthma Council Australia has forecast Thursday’s pollen count as extreme.

“People do not need to be in the immediate area of a fire to suffer from the effect of smoke on their lungs. Wherever smoke haze is visible, it is a threat to those with asthma,” NAC chief executive Siobhan Brophy said.

Meanwhile, Melburnians will see one of the city’s hottest-ever November days, expected to reach 39C.

“For Melbourne, the last time it reached 39 degrees was in 2012 and the … record for November is just over 40,” weather bureau senior meteorologist Richard Carlyon said.

Temperatures are expected to be milder along the bayside but will still reach the high 30s in towns like Geelong and Mornington Peninsula.