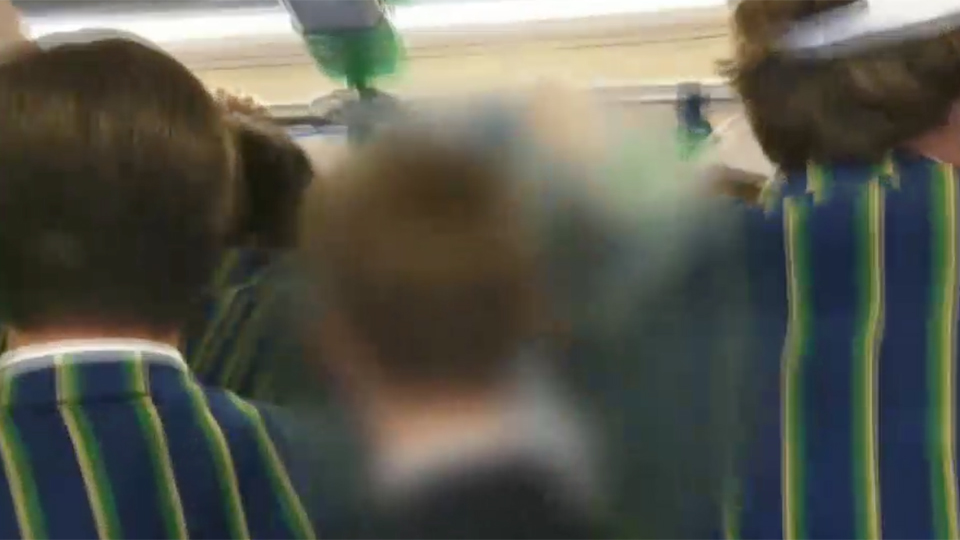 After apologising over the first incident, St Kevin's year 12 students were singing the offensive chant on a Melbourne street on Monday. Photo: ABC

An all-boys school in Melbourne has admitted cultural problems at the college are “more widespread than we understood”, as more footage emerges of students performing sexist chants in public.

The headmaster of St Kevin’s College said the school had begun “addressing” students from grade five onwards, to combat what he described as “offensive and misogynistic behaviour”.

Videos obtained by the ABC show a group of St Kevin’s year 12 students singing the “I wish all the ladies” chant on the street on Monday night.

The footage was taken hours after the ABC published a report about students at the school, who were condemned for singing the same chant in a packed tram over the weekend.

It is understood year 12 students were out drinking in Richmond before their valedictory dinner on Tuesday.

The video was posted on social media and shared widely.

The ABC has chosen to blur the faces of the students involved.

In an email to parents on Thursday evening, headmaster Stephen Russell said the graduates had let down the school community.

“The size of our challenge has been clearly illustrated to me by my knowledge that some recent graduates foolishly and recklessly thought it would be amusing, when they were celebrating, to use this horrible chant,” he wrote.

“Sadly, we are aware that the use of the misogynistic language such as in the chant on Saturday, is more widespread than we understood and this knowledge has intensified our determination to resolutely reshape our programs and to look to do so much more in this area.”

Mr Russell said the college had addressed students from year 5 upwards about the “offensive and misogynistic” behaviour.

“We have also begun to consider shorter term and longer term ways in which we can improve the education of our boys in this important area of relationships and, in particular, respect for women,” Mr Russell said.

“I have and will continue to seek advice from professionals, colleagues, our community, advisors and experts beyond the college who can effectively critique what we do and enhance our programs.”

A former St Kevin’s student, who did not want to be identified, said students in his year level learned and practised the same chant on a school camp in year 8.

“There were St Kevin’s teachers in the vicinity and they didn’t raise any objections,” the student, who graduated nearly a decade ago, told the ABC.

“Looking back on it now, it’s totally inappropriate.”

Another girl who graduated from a nearby school said the chant was used at various private schools.

“It started a long time ago and was just passed down year level to year level. The song’s been around for a long, long time.”

The ABC can also confirm a group of boys at St Kevin’s last year made a derogatory rap song about girls from another school and published it on the internet.

The song, which was widely spread among private schools in the area, has since been taken down.

The ABC understands the boys involved were suspended and forced to write an apology to the girls’ school, but not the individual girls who were named in the song.

A friend of one of the girls who was targeted said the incident left her devastated.

“She felt really objectified and there was nothing they could do about it either,” she said.

“They felt so violated that part of their personal lives was there to be laughed at”.

St Kevin’s this week refused to answer questions from the ABC about the incident.

Following Saturday’s tram incident, several year 10 and 11 students were reportedly suspended by St Kevin’s College. The college has refused to say how many students were disciplined.

After issuing an initial public apology on Monday, the school has refused all requests for interviews and ignored questions from the ABC about other alleged incidents of sexist behaviour.

One recent graduate from an all-girls school near St Kevin’s College said Monday’s late-night chant was a show of defiance of the ABC’s original report.

“They would have all seen that news and would have known what they were doing was wrong, and they did it again,” she said.

“I think they’re saying ‘f— you’ to all the girls who’ve called them out.”

A 2018 graduate who criticised the school for a “hypermasculine” culture, Luka Kiernan, has been attacked on social media by current and former students.

Mr Kiernan and another boy wrote to the school’s deputy head last year and warned of “wide-scale disrespect towards women” among the student cohort, but claim their concerns were largely ignored.

A photo of Mr Kiernan at the school, put up to recognise his academic achievements, has since been defaced with the words “traitor” and “snitch”.

More than a thousand people “liked” a Facebook post by another St Kevin’s College student, Thomas Gilbert, who said the misogynistic actions of individuals were “the fault of our wider society”.

Mr Gilbert disputed Mr Kiernan’s comments, and called on others to “stand up and defend our school and its culture”.

“I, and the vast majority of our students, staunchly and unwaveringly oppose misogyny,” Mr Gilbert wrote.

“I will not stand idly by and let my school, a school dedicated to justice and solidarity, be ruthlessly slandered and defamed.”