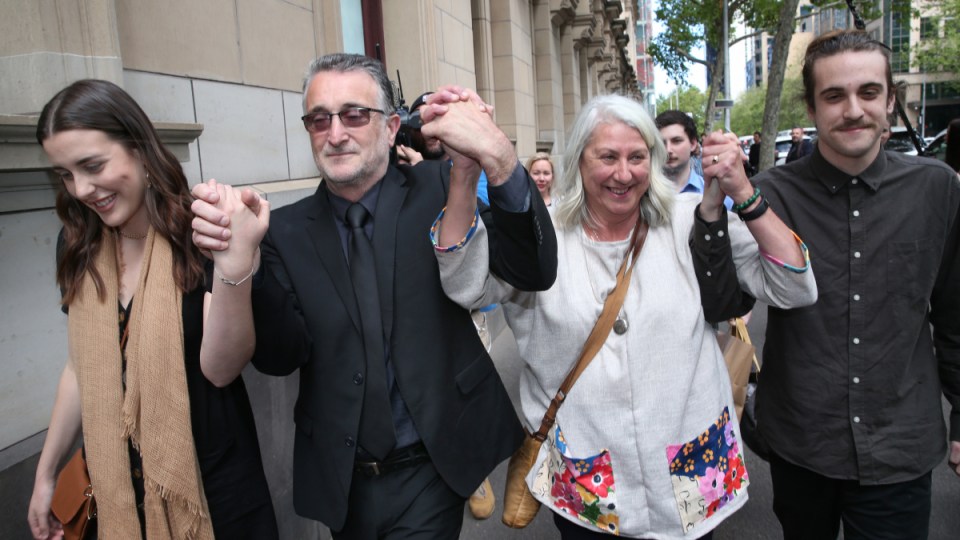 A Victorian bus driver freed from jail after his convictions were overturned has left the dock to cheers and applause from the courtroom.

But the appeals court overturned his convictions last week after finding justice had been miscarried.

Aston – who had already served 10 months behind bars – was re-sentenced on Monday to a two-year community corrections order, which is essentially a jail term served in the community.

When he was told by the thee appeal judges he was free to exit the dock, the packed court room clapped and cheered and Aston shared hugs with his supporters and family.

HIs wife Wendy sobbed as his new sentence was read out.

“I feel really good. I’d like to say sorry to all my passengers,” Aston said as he left the Supreme Court.

“Now [state premier] Dan Andrews, if you really do care about the people of Victoria, before that bridge takes a life, fix it.”

Six of Aston’s 14 passengers suffered a range of injuries, including spinal fractures, glass particles in the face, scalp injuries and a broken neck, in the crash into the Montague Bridge at South Melbourne in February 2016.

The rail bridge clearance is only three metres and the bridgethenew is frequently hit by trucks and buses passing underneath. Aston told investigators he couldn’t recall seeing warning signs.

He suffered a broken neck in the accident and has since been diagnosed with post-traumatic stress disorder, depression and anxiety.

Outside court, Aston thanked friends, family, his legal team, the court and other supporters through his ordeal.

“If it’s all right with you guys, I’d really like to go home now,” he said.