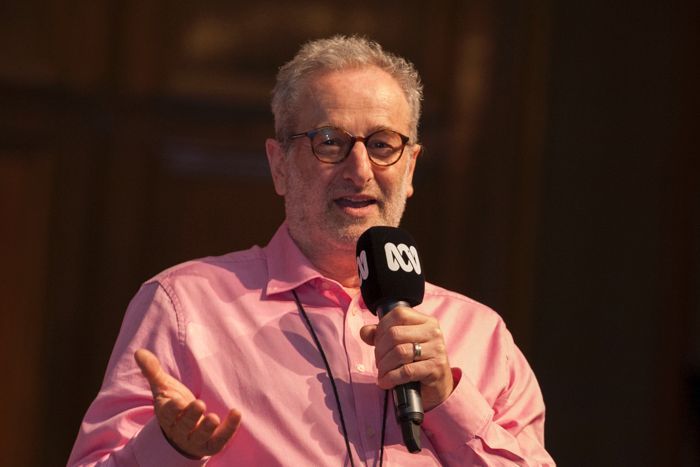 Jon Faine at the Melbourne Town Hall on Friday,

Veteran ABC broadcaster Jon Faine has received a standing ovation after signing off on his morning radio show after 24 years in the seat as ABC Radio Melbourne morning host.

Thousands of loyal listeners crowded Melbourne’s Town Hall after winning seats in a ballot for his final live broadcast, which kicked off at 8.30am on Friday.

A former lawyer, Faine, 63, who some listeners in recent days have called in describing him as a “grey nomad” after a recent six-week trip to the Northern Territory, insists he’s not retiring but hasn’t revealed details about his future.

Surrounded by dozens of regular guests on stage, an emotional Faine spoke about serving his audience, and the “incredible privilege” of interviewing people from all walks of life and telling their stories.

“In the kitchen or on the tractor, you, the audience, you are why we exist. If we ever forget that, we’re lost, because live radio is the best bullshit detector ever invented.

“There’s nothing like the intimacy that radio provides and there never will be. And we must use those powers for good, not evil.”

Among his more significant broadcasts included the sudden call-in to cover the 2009 Black Saturday bushfires, and the murder of ABC employee Jill Meagher in 2012.

Now that’s a sign off. Standing ovation at Melbourne Town Hall as Jon Faine hangs up the mic from ABC Melbourne. pic.twitter.com/IpVLbip4Xz

Faine said the day would not be complete without reflections on those broadcasts.

“To Tom [Meagher], Jill’s parents, her family, her friends, I send you another big hug,” he said.

“And the killing of women just going about their business has not stopped and we must somehow, we must, make our community safer.”

Faine became emotional as he spoke of a pledge made to the Victorian communities devastated by the deadly 2009 bushfires.

“We made a promise to the bushfire communities that we would not just descend upon them, grab their stories, use it as media fodder and then move on,” he said.

“Instead we said we’ll be here for the long haul, the recovery, the tussles with bureaucrats, insurers and government and I hope we’ve kept our word.

“And on that night, that emergency broadcast, it didn’t save everyone but we did our best.”

One of Faine’s final studio interviews on Thursday was with former federal Labor leader Bill Shorten. ”I, like many people, are going to miss you,” Mr Shorten told Faine.

Faine joined the ABC in 1989 to produce and present Radio National’s Law Report, before moving on to 3LO and stints on ABC TV’s Investigators, First Edition and Wise UP.

At a National Press Club address on October 3, Faine said the ABC was
“in safe hands” but urged the broadcaster to “be a bit more mongrel”.

“I thinks the board’s got some questions to answer but the management I think are pretty good these days.

“The risk to the ABC now is if anything, it could become too bland because it doesn’t want to upset people, and I think the ABC has to be a bit more mongrel.

“If we can’t do that because we are scared that people might complain about us, well we may as well turn everything off and shut the doors and turn out the lights…”

Former News Breakfast presenter Virginia Trioli is scheduled to take over from Faine on Monday.

“Virginia Trioli is formidable and I’m sure she will maintain whatever tradition it is that’s existed on the morning show on ABC radio Melbourne,” Faine said.