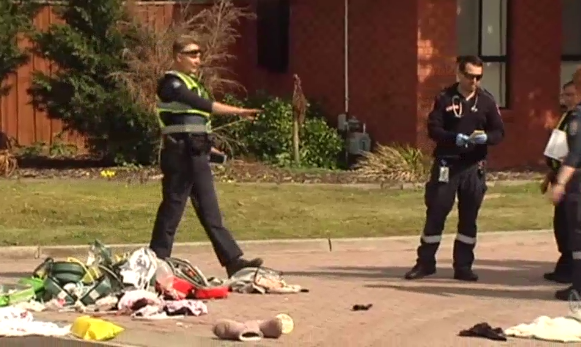 A scatter of the woman's belongings marks the spot where the tragic mum hit the roadway. Photo: ABC

A baby is fighting for life in hospital, its mother is dead and a man has been arrested after an incident in Melbourne’s north-west on Saturday afternoon.

Police said it was believed a man was threatening to assault the woman at a Kiwi Retreat home in Keilor Downs just before 1:00pm.

“The incident continued in a car and the victim has fallen onto the road as the car was driving around a corner,” a police spokeswoman said.

The pregnant 32-year-old was airlifted to the Royal Melbourne Hospital after 1:00pm in a critical condition.

Police said she died in hospital on Saturday evening.

The baby, delivered via caesarean section, remained in hospital in a critical condition.

A 35-year-old Keilor Downs man was assisting police with their enquiries on Saturday night. Police earlier said it was believed the two were known to each other.

Belongings were strewn across the road near the scene of the incident on Saturday afternoon.

Anyone with information should contact Crime Stoppers on 1800 333 000 or submit a confidential report online.