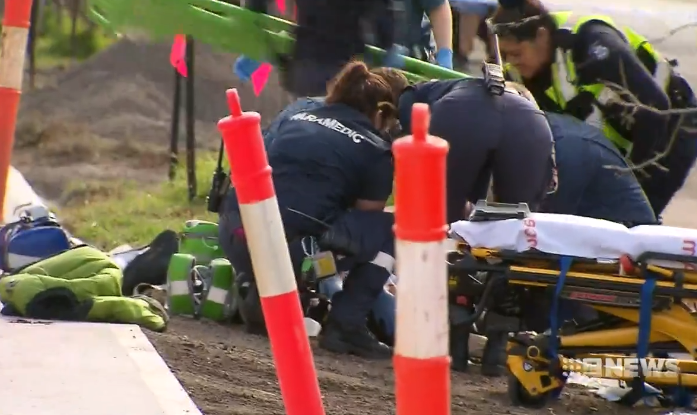 Medics try frantically to stabilise one of the victims of the Kings Park knife attack. Photo: Nine/Twitter

A teenage boy is dead and another fighting for life after an outer-suburban Melbourne street become the scene of a bloody attack on Saturday afternoon.

Residents poured out of their homes on Main Road West in Kings Park,  about 20km north-west of the CBD, when agonised screams shattered the peace shortly 2.30pm.

They found the two victims sprawled by the roadway, one clutching a stomach wound and the other bleeding heavily from knife wounds to the legs.

Witnesses said at least one of the victims had family on the street, with the attack happening outside their home.

Neighbour Ron Gjurovski told Nine News of watching one of the victims stagger, raise his hands and fall to the ground in a pool of blood.

Neighbours earlier said they heard screams, and saw a car speeding from the scene.

Nearby resident Jimmy Nguyen also witnessed the aftermath of the attack, telling how locals tried in vain to stop the bleeding with towels and tissues.

Both teens were rushed by ambulance to hospital, where the 17-year-old from Kings Park succumbed to his wounds.

Homicide Squad detectives are investigating the incident, with police saying a number of suspects were being sought.

“The exact circumstances surrounding the incident are unclear at this stage but at this time it is being treated as suspicious,” a police spokeswoman said.

The 18-year-old victim remained at the Royal Melbourne Hospital in a critical condition on Saturday night with what paramedics described as critical injuries to the upper body.

Melbourne stabbing leaves teen dead and another fighting for life