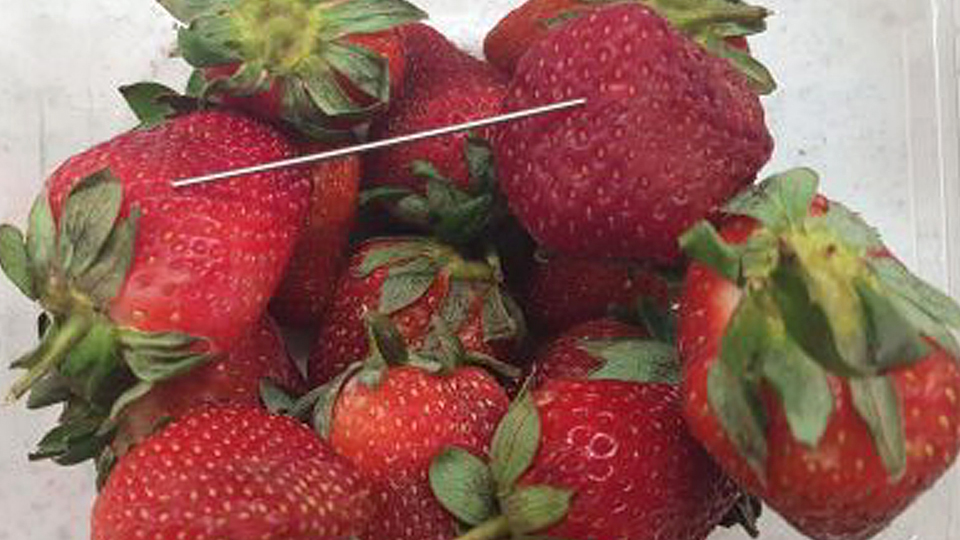 Victoria Police were called in over a needle found in a strawberry bought in the suburb of Fairfield on August 25 and another bought at Eltham on September 22.

The discoveries come just over a year after nationwide strawberry contamination scare saw stock stripped from shelves and mountains of the fruit destroyed.

A Queensland woman was ultimately charged with food contamination offences over the scare, but not before 230 needle contamination incidents – many thought to have been planted by copycats – were ultimately reported nationwide, affecting 68 strawberry brands.

Melbourne man David Chapman told radio station 3AW on Monday his step-daughter bit into the needle sitting through the length of a strawberry on Sunday.

Mr Chapman said while the needle did not cause major injury, it did require a hospital visit and there were still complications.

“She’s back at home, they reckon it’ll pass,” Mr Chapman said of his step-daughter.

Police said they previously also received a report of another another needle, believed to have been found in a strawberry brought from a Fairfield store on August 25.

Detectives from the Banyule Criminal Investigation Unit are investigating both incidents.

“The community is reminded that anyone found to be contaminating food products can be charged with a serious indictable offence with penalties including up to 10 years in jail,” a police spokesman said.

After allegations that the Eltham store in question was a Coles outlet, the supermarket released a statement saying it was following up on the complaint.

“Coles takes the safety of the food we sell seriously, and we have spoken to the customer to follow up their complaint,” Coles said.

“We have worked with our strawberry suppliers to implement additional control measures to ensure strawberries are inspected before they are sent to supermarkets. We have notified the police and will follow up with our supplier to investigate the matter.”

Police are have urged people to take care when consuming fruit and are urging anyone with information to contact Crime Stoppers on 1800 333 000.