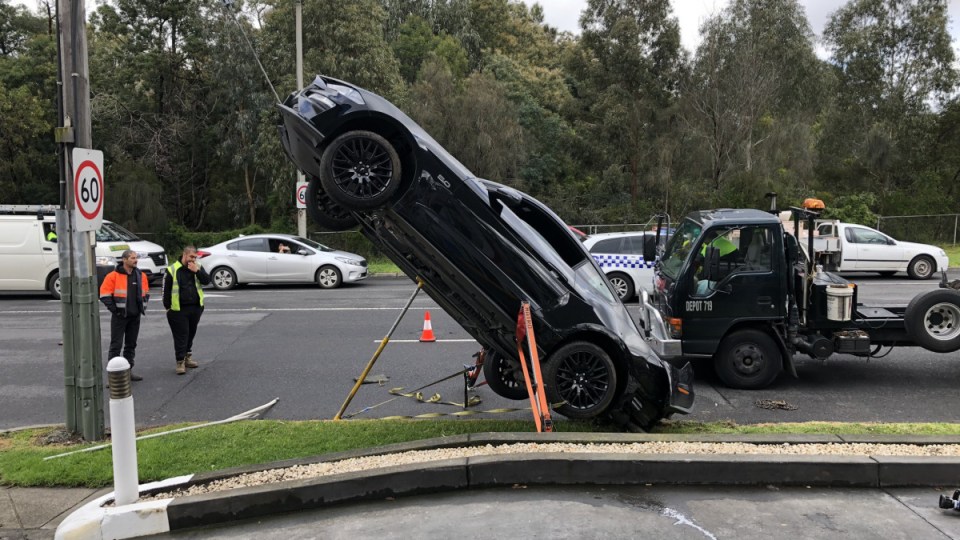 A young Melbourne driver may right now be reflecting on a rather expensive repair bill, and a bruised ego, after a morning peak-hour mishap left her car suspended in mid-air.

Shortly before 7.30am on Monday, the 20-year-old female driver lost control of her mint-condition black Ford Mustang in damp conditions in the eastern suburb of Kew.

With the high-horsepower beast losing traction, the car careered towards a power pole before mounting its support wiring and coming to rest at a 45-degree angle.

Two drivers were booked by @VictoriaPolice for using their phones while driving to take a snap of this Mustang. @10NewsFirstMelb pic.twitter.com/IvTp9h8Diz

Suffice to say, that was only the beginning of her problems – it occurred outside a service station, with the entire ordeal caught on camera.

Emergency crews quickly came to the driver’s aid and rescued her from her precariously positioned vehicle.

Amazingly, she walked away without injury.

There has been a costly wrong turn for a Mustang driver with the luxury vehicle becoming wedged on a power pole wire in Kew. #9News pic.twitter.com/CthIaYPFJR

Media reports suggest the vehicle was suspended above the median strip near the Chandler Highway for three hours during the morning rush.

“She could’ve gone up and flipped over and landed on the roof and could have been trapped inside – it could have been a lot worse,” MFB firefighter Mark Power told 7 News.

Oh – one can only guess this lucky driver will be putting her flat feet on the ground, at least for a little while.