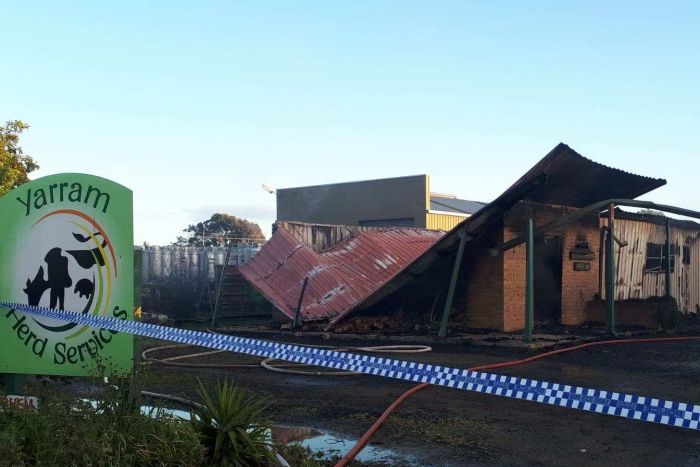 An overnight fire has destroyed 100 valuable cryogenic cylinders containing cattle semen at a genetics laboratory and storage facility at Yarram in south-east Victoria.

The fire in Rodgers Street started about 3am and took 10 fire crews more than two hours to contain.

The 250-square-metre building was fully alight when firefighters arrived.

“The liquid inside the cylinders was rapidly expanding and essentially the lids of the cryogenic cylinders were just popping off the top and projectiles were being thrown from the building,” he said.

“So firefighters went into a defensive mode initially to protect themselves, because there were also LPG cylinders at the neighbouring property, and they did a magnificent job.

“I’ve never had anything to do with the artificial insemination (AI) side of things before.

“There was a couple of other flammable liquid cylinders stored within the building which did cause projectiles to exit the building.”

Yarram Herd Services had provided artificial insemination, breeding advice, herd testing, calf dehorning, and freeze-branding services for dairy and beef cattle farmers between Woodside and Yanakie in South Gippsland for the past 20 years.

“The actual cylinders are worth between $500 and $1000 per unit, but the semen inside them varies in price,” he said.

“We’re coming into the AI season so there would have been substantial amounts of semen inside the tanks that we’ve lost, which was owned by our local farmers, and it can range in value from $5 per straw to $95 per straw.

“It’s going to be a huge blow, especially for our farmers.”

Mr Thomas said equipment as well as cattle semen was lost in the blaze.

“A lot of farmers would have semen stock in the building in those tanks, preparing for AI, so we’ve got that plus all of our herd-testing equipment that was in there as well,” he said.

“So this is significant damage and it is going to have a flow-on effect on Yarram, especially after the drought that Yarram district has experienced over the last 12 months.

“It’s going to be a real blow for sure.”

The Yarram Herd Services board, management, and staff will meet on Tuesday.

Fire investigators have been called in to determine the cause of the fire.