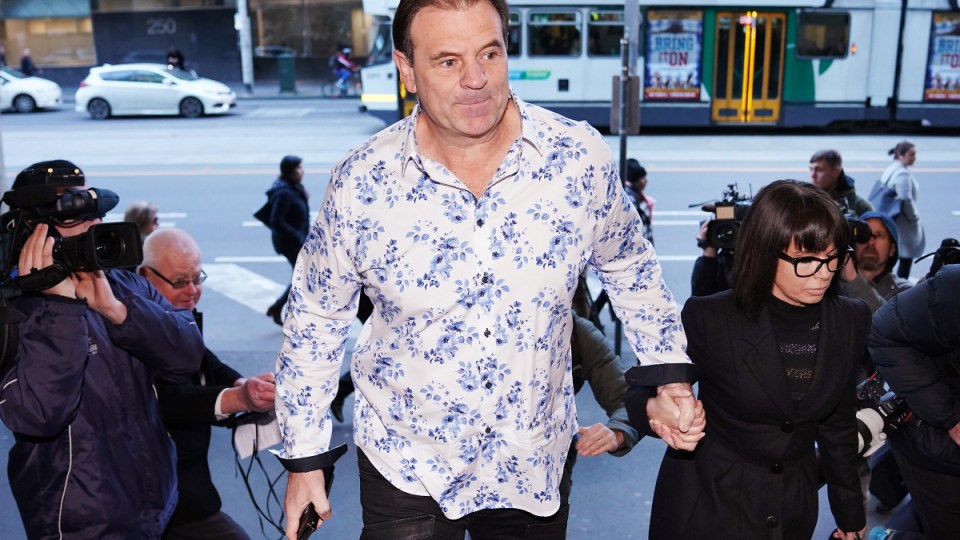 John Setka arrives at the Melbourne Magistrates Court with his wife Emma Walters.

CFMMEU boss John Setka has apologised for his “macho” behaviour and vowed to change his ways but stands by his decision not to stand down, after being convicted of harassing a woman and breaching a court order.

Mr Setka was on Wednesday slammed by a magistrate who labelled his behaviour “nasty” and that of a “misogynist” but spared him jail time.

Outside Melbourne Magistrates Court, Mr Setka said he was embarrassed but wanted to acknowledge his wrongdoings and encourage other men to do the same.

“I take responsibility for that. I screwed up.”

“I want to apologise.”

John Setka says he’s embarrassed by the language he used towards a woman in a series of texts & calls a magistrate said were misogynistic. He called the woman “c—t” & “dog”. He’s vowed to change & says he hopes to encourage other men to seek help for their behaviour. pic.twitter.com/mKoTMfPcY2

He said the language he had used towards the woman was “very inappropriate”.

“People have got to learn that sometimes language like that can be just as hurtful as if you’d physically assaulted someone.”

The 54-year-old was supported by wife Emma Walters, who looped her arm around his as he heard his fate after pleading guilty in Melbourne Magistrates Court to two charges, including using a carriage service to harass.

The offending included calling a woman’s phone 25 times in one night and labelling her a “dog” and “c—t” in text messages.

Magistrate Belinda Wallington said that while the behaviour was not physically violent, Mr Setka had to take responsibility for the “nasty” and “unedifying” behaviour.

As well as being put on a good behaviour bond, he was ordered to donate $1000 to an Aboriginal legal service and undertake a men’s behavioural change program.

Outside court, Ms Walters blasted those who had publicly spoken “in favour of the Labor party’s line” for political gain without checking on the welfare of her family or “bothering” to find out the truth of the circumstances.

She said if her husband stood down from the union he has served for 37 years it would be a “devastating loss” to the movement.

Declaring Mr Setka a good husband and father but “not infallible”, adding she was supportive of him undertaking a men’s behavioural program: “I think it’s a great thing for all men”.

“John has had the courage to confront his behaviour — and to change,” Ms Walters said.

“And now to encourage others to do the same — and to seek help before they sink.”