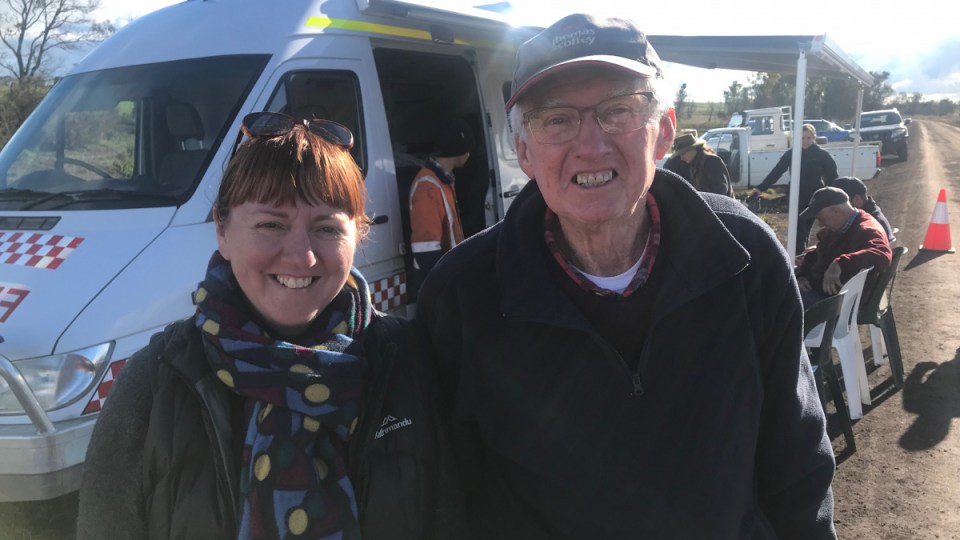 A community plan to link farmers to mental health support after a major bushfire could be rolled out across Australia to help rural people cope after natural disasters.

The smell of sizzling sausages, and the lure of Tim Tams and hot drinks soon attracted farmers and their families.

Ms Rondeau has returned twice a week every week, with a team serving a cuppa and lending an ear to anyone who visits.

The community-led initiative certainly seems simple, but it’s having a big impact: Farmers who have been hesitant to talk about their experiences coping on the land are opening up.

Now the idea is being showcased interstate.

More than 14 months have passed since a fierce windstorm carried flames across the north-east of Warrnambool, devastating rural communities and destroying hundreds of homes and livestock.

Ms Rondeau said the bushfire was so traumatising that some of the affected farmers are only now just beginning to talk about their suffering.

“Imagine your home and your business being wiped out in one night – how do you recover from that?”

The emergency consultant, who runs the van on the side of her work with Moyne Shire Council, said a key focus of the disaster relief van – dubbed ‘Van Tastic’ – was to make its support services easily accessible for farmers and their families.

She said it was unlikely that farmers would drive dozens of kilometres to attend a formal committee meeting. They needed help to come to them.

“Through the van, we’ve been able to check on mental health issues – if someone doesn’t show up one week, then we can make a visit to their farm and go and check on them.”

After success in the Warrnambool area, the simple plan to build connection in rural areas devastated by disasters is being taken interstate.

Ms Rondeau has already presented the Van Tastic model at a conference in Melbourne, and she recently spoke at the Australian and New Zealand Disaster and Emergency Management Conference in Queensland.

On Monday, Moyne Shire will announce a win for the community, confirming the Victorian government has approved funding to keep the van going for another six months.

Dairy farmers Jill and Brad Porter lost 800 acres of land and more than 300 cattle in the St Patrick’s Day bushfires.

She said the the informal nature of the van meant it was able to connect to traumatised farmers like her who otherwise wouldn’t have accessed vital support services.

“You didn’t have to get dressed up, and it didn’t matter if you’d had a bad day,” Ms Porter said.

“The van stepped up before I realised I needed them to step up – they knew when things weren’t right and they would come to my door with chocolate brownies and come inside for a cuppa.

“That’s the beauty of the van – it accepts you for who you are.”

Ms Porter said it was easy to forget about the long-term damage inflicted on bushfire victims after key infrastructure was restored and their “pastures were green again”.

But the truth is recovery can take years.

“There are a few people in the community who would not be in the headspace that they’re in today because of the van,” Ms Porter said.

He said the van has played a “crucial” role in repairing the community.

“We have this idea that rural communities are highly connected, but often they don’t have much to do with each other,” Dr Gordon said.

“Social networking and meeting with others helps them process their own experiences.”