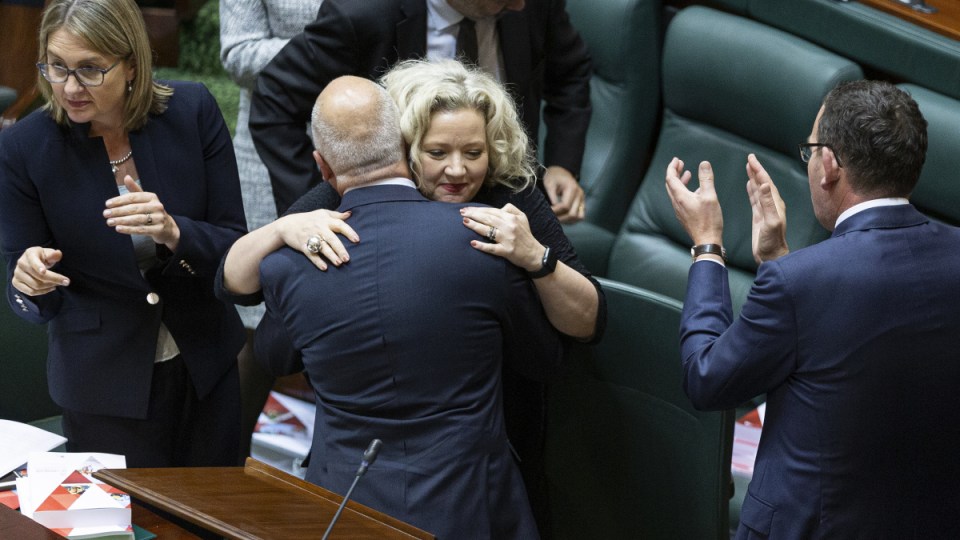 Victorian Treasurer Tim Pallas is congratulated by colleagues after speaking during the Victorian Budget hand down. Photo: AAP

Foreign property investors, luxury car buyers and public servants will bear the brunt of a steep decline in stamp duty revenue amid the sharpest 12-month fall in housing prices in Victorian history.

Fresh from Labor’s thumping election win last November, and three and a half years out from the government’s next electoral test, Treasurer Tim Pallas’s budget shows state debt will more than double over the next four years to fund a $27.4 billion “suburban transport blitz”.

This includes $15.8 billion to fully fund the North East Link, and $6.6 billion to make good on an election promise to remove a further 25 level crossings, which would bring the total number of crossings removed since the Andrews government took office to 75.

In a budget dominated by the commitments Labor made during the state election campaign, one fresh announcement is $2 billion to upgrade the Sunbury line to enable higher-capacity trains to run on one of Melbourne’s busiest lines.

Platforms will be extended at 10 stations on the line.

The government says the upgrade will create room for an extra 113,000 passengers to travel on the line during peak times every week.

Accessibility upgrades will also be made at eight of those stations to make it easier for people in wheelchairs to board.

There is also $750 million to duplicate the Cranbourne line, in the city’s south-east, to allow trains to run to the city from every station every 10 minutes during the peak.

On the Hurstbridge line, 4.5 kilometres of track will be duplicated and new stations will be built at Greensborough and Montmorency.

Away from the city, 18 new V/Line VLocity trains, with a price tag of $340 million, will be shared between the Albury, Ballarat and Geelong lines.

As promised during the campaign, three new stations will be built in and around Bendigo – at Goornong, Raywood and Huntly – and a station will be re-established at Harcourt.

The tax paid by foreign property investors will be increased from 7 to 8 per cent from July 1, bringing Victoria’s rate into line with that of New South Wales.

The tax paid by absentee landowners will be increased from 1.5 per cent to 2 per cent, also in line with NSW.

A land tax exemption will be abolished for land that is next door to a person’s home but on a separate title and without a separate residence.

The government says the removal of the exemption is designed to discourage land banking.

Mr Pallas defended the tax increases in the budget, saying they were targeted at people who had the capacity to bear a greater tax burden.

“We see this as being progressive, as being fair,” he said.

Revenue forecasts from stamp duty have been revised down by $5.2 billion since November, as the property market softens as a result of tighter lending.

Mr Pallas said over the past year Victoria had experienced the biggest 12-month decline in property prices in the state’s history.

But after continuing to decline in the second half of this year, the government expects the property slump to bottom out and begin to recover from early next year.

It has forecast steady growth in stamp duty revenue from 2020-21.

But these charges will not apply to low-emissions passenger cars and cars used by farmers in the business of primary production.

Mr Pallas said the government was raising revenue in a manner that would “not substantially distress the broader community”.

“If you can buy a $200,000 Maserati, you’re not going to be particularly fazed by a slight increase in the rate of vehicle duty that you have to pay,” he said.

The budget makes good on a string of campaign promises, including $882 million to start the rollout of 15 hours a week of subsidised kindergarten for all three-year-olds.

The government has promised every three-year-old Victorian child will have access to at least five hours per week of kinder by 2022.

All Victorian government school students will get free dental care at a cost of $322 million, with the first school dental vans expected to hit the road later this year.

The government says the service will save families about $400 a year per child on dental costs.

Separately, the government is demanding the public service find $1.8 billion in savings through efficiencies to free up money to spend on priority areas.

Mr Pallas said it would be up to departments to decide how to save the money and the process would be overseen by the secretaries of the departments of Premier and Cabinet, and Treasury and Finance.

He said forced redundancies would be a last resort.

Mr Pallas had promised a “budget of hard choices” and was asked in the budget lockup which decision had been the toughest.

The government has offered these workers an annual increase of 2 per cent, a proposal that has been rejected by unions.

Debt expected to rise above $50 billion

With a busy program of ambitious projects, including the Melbourne Airport rail link and the suburban rail loop, Mr Pallas said debt as a proportion of the Victorian economy would continue to grow beyond this period, to peak at 12 per cent of gross state product.

Mr Pallas said these projects were vital for the state to cope with population growth.

The state budget was originally scheduled for April 30, but was postponed until after the federal election due to what Mr Pallas called the “starkly contrasting offerings” from the two major parties.

Mr Pallas said the budget was about $2.6 billion worse off as a result of Scott Morrison’s election victory, principally due to federal Labor’s $2.5 billion commitment to the Metro Tunnel project, which was not matched by the Coalition.

“My party on election night was not as much fun as I think Josh Frydenberg’s was,” Mr Pallas said.

But he said the state government had moved on from the result.

“The Australian people have made their decision … we’ll work as constructively as we can with them [the Morrison government].”

Fifth year of keeping our promises. Fifth year of delivering for all Victorians. #VicBudget pic.twitter.com/lmPM3xFpjb

The government’s existing scheme to provide rebates and zero-interest loans for solar panels, hot water systems and batteries will be expanded, including to renters, at a cost of $1.3 billion.

The Essential Services Commission will get an extra commissioner, dubbed “an energy cop on the beat” by the government, to prosecute misbehaviour by energy retailers.