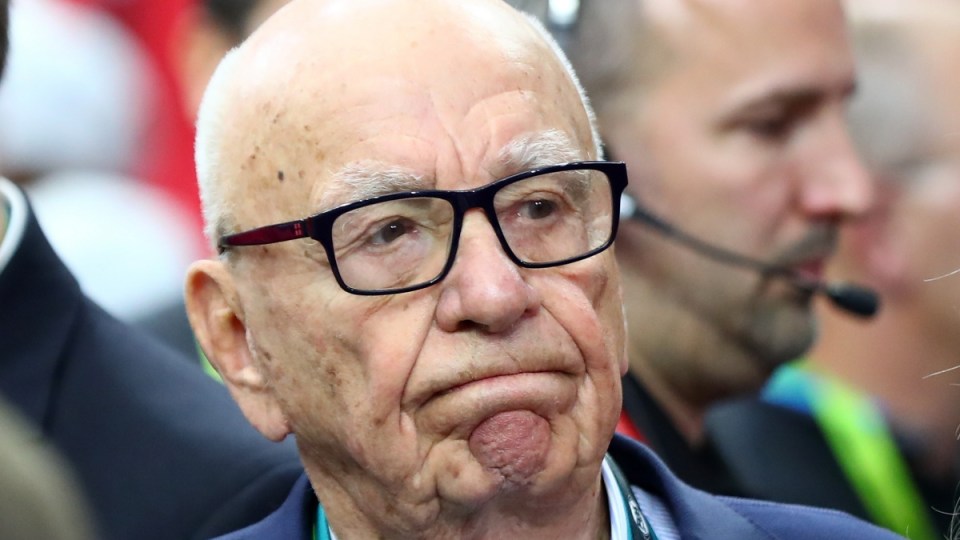 Rupert Murdoch had no intention of a regime change at the top of a Turnbull government according to his son. Photo: Getty

There is mounting evidence that Australia is sick of Rupert Murdoch and the political propaganda machine he runs in the guise of a news organisation.

In January, Bill Shorten rebuffed an open-ended offer to meet Mr Murdoch whenever the opposition leader was in the United States.

According to the ABC’s 7.30 political editor Laura Tingle, Mr Shorten replied that any dealings he had with News Corp would be conducted with the company’s representatives in Australia.

This was a bold break with tradition. For decades, Labor leaders have paid court to Mr Murdoch.

During the prime ministership of Bob Hawke, there was memorable footage of a cortege of ministerial cars driving in procession through the gates of Murdoch’s farm outside Canberra.

It was Paul Keating who changed the media ownership rules in 1987 so that Mr Murdoch was able to buy the Herald and Weekly Times, giving him what has turned into a newspaper monopoly in Brisbane, Adelaide and Hobart, as well as ownership of the Herald Sun in Melbourne.

Shorten’s two predecessors, Kevin Rudd and Julia Gillard, both met Murdoch in New York in an attempt to obtain his blessing.

Much good it did any of them.

Mr Rudd has bitterly repented, saying last August that Murdoch was “the greatest cancer on Australian democracy” and calling for a royal commission into News Corp.

More dramatic, however, has been the fallout from last week’s attack by the Daily Telegraph on Mr Shorten over the life story of his deceased mother.

Not only did the media as a whole stand back at a news conference and allow Mr Shorten to let rip for 10 minutes at this “gotcha sh-t”, but two high-profile journalists with News Corp credentials have spoken out against the organisation’s culture.

The courage this took should not be underestimated. They must know the relentless personal vilification that befalls anyone who ends up on the News Corp hate list.

One of them, Rick Morton, is on the staff of The Australian, where he is social affairs editor.

He told a seminar at the University of Technology Sydney on May 9 that in recent months, “the craziness has been dialled up” at the newspaper.

He said openly what other insiders have been saying for years: That senior writers know what the editorial line is and write stories to fit. “It’s not always a Murdoch line; it’s just that Murdoch hires editors who are very much like him.”

Asked whether the paper’s journalists were uncomfortable with The Australian’s barracking for the Coalition in the election, Morton said they were “more uncomfortable certainly now than at any time I’ve been there in the past seven years”.

“There is a real mood that something has gone wrong.”

A second attack came from Tony Koch. He worked for News Corp for 30 years and is a very distinguished journalist: Winner of five Walkley Awards, recipient of the Graham Perkin Journalist of the Year Award and – ironically – of the Sir Keith Murdoch News Limited Award.

He did not mince words: “No editor I worked for would have put up with the biased anti-Labor rubbish that, shamefully, the papers now produce on a daily basis.

“Gone is the requirement for balance. One has only to look at the story selection and headlines on the front pages of the papers each day to see that an anti-Labor angle has been taken, however contorted had been the literary gymnastics required to finally arrive at that particular bit of stupidity.”

It was notable that both went well beyond the specific case of the [Daily] Telegraph, assailing the performance of the group’s flagship, The Australian, and the craven nature of the organisation’s editorial leadership.

As if to confirm the bias they spoke of, the lead headline on page 12 of The Weekend Australian on May 11-12 contained this magnificent Freudian slip: “Hypocritical” ALP must back our tax package. Our tax package? The story was about Scott Morrison claiming a mandate for the Coalition’s $158 billion tax package.

In the current issue of The Monthly, the magazine’s US correspondent Richard Cooke has weighed in with a substantial essay arguing that News Corp represents a grave threat to democracy.

Cooke has just published a book based on his observations of life in the United States during and after the election of Donald Trump. He writes of News Corp in Australia: “… [I]t isn’t a normal news organisation any longer. At News Corp – in an inversion of journalism’s ideal– the old-fashioned, straight-down-the-line reporting is expendable and surplus to requirements. It is the unhinged propaganda outfit that is central to the identity of the company. It is the core that is lunatic, not the fringe.”

In the US and UK, where Murdoch is a big player, some rival media organisations have confronted him. The most recent instance was a three-part series in April by The New York Times called How Rupert Murdoch’s Empire of Influence Remade the World.

Now the uprising has spread to Australia, driven by politicians and journalists, people with skin in the game.

No doubt the decline in readership of the News Corp newspapers is a factor. Roy Morgan newspaper readership data for the year ended March 2019 show year-on-year declines for The Australian, the Telegraph, the Courier-Mail and the Herald Sun.

The Adelaide Advertiser and Hobart Mercury were up Monday to Friday but down at weekends.

This is part of the overall decline in newspaper readership that also afflicts The Sydney Morning Herald, The Age and the Australian Financial Review.

But this decline has been a trend for several years, so it cannot fully explain the recent rebellion.

Mr Shorten’s refusal to meet Murdoch, the searing attacks by him and other politicians on the Daily Telegraph, the criticism from News Corp-related journalists and the attacks by rival publishers suggest something is happening in the political zeitgeist, and not just in Australia: That at some level, democratic societies have had enough of Murdoch and his propaganda operation masquerading as a news service.