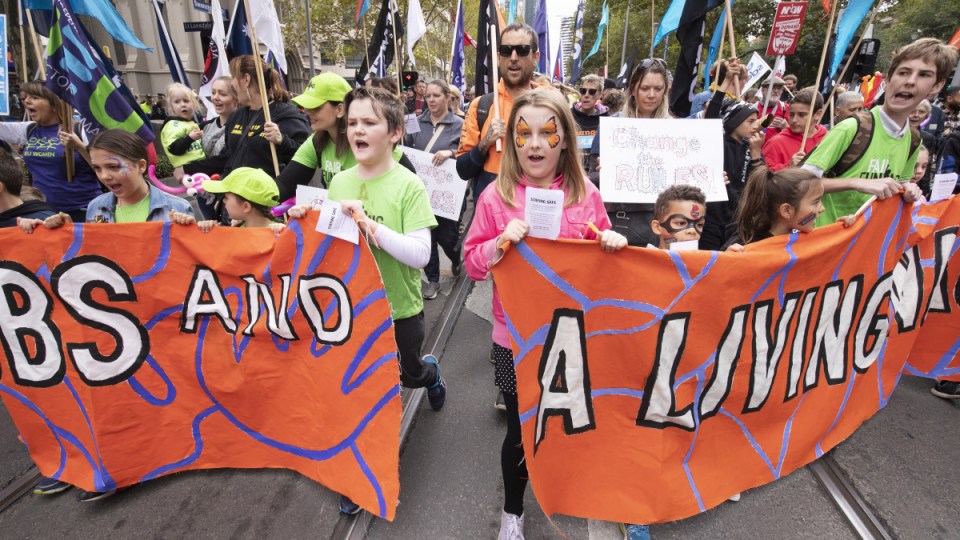 An estimated 100,000 people marched for workers' rights in Melbourne.

Thousands of Australian workers went off the job on Wednesday, marching to demand better conditions and increased wages.

Melbourne streets were blocked as a crowd, which organisers claimed to be 100,000 people, chanted through the CBD. Other Change the Rules rallies were held in 14 centres across the country including Cairns, Launceston and Perth.

Victorian Premier Daniel Andrews joined the Melbourne march which started at Trades Hall at 10.30am and finished at Victorian Parliament and was the largest of the rallies.

“Some will be critical of me being here … but I am proud to be here,” Mr Andrews told the Nine Network.

“There will be tens of thousands of people marching in Melbourne and across the country setting a clear message that rules need to change and we need a fair go.”

He also used the rally to back Labor leader Bill Shorten in the coming federal election.

The show of action was the latest in union campaigns highlighting wage issues, including cuts to penalty rates. Unions say the federal government has overseen the largest decline in living standards in 30 years.

Cleaner and United Voice member Olisa Heard said her job was forever insecure because she worked for contractors.

“If we get a pay increase with one company, they lose the contract to a cheaper company because whoever bids the lower tender gets the contract,” she told the crowd. “So our wages don’t go up.”

Ms Heard said she had seen cuts to staff, hours and pay over the years, and the uncertainty over income was having a detrimental effect on her family, including her husband’s mental health.

“We have been slowly manipulated into believing we do not have a voice and no one will care,” she said.

“We stand united to show our government, these monster corporations and companies that we are woke – today our voices will be heard.”

Huge crowd outside Michelle Landry’s office in Rockhampton! They are fired up and ready to #ChangeTheRules! pic.twitter.com/Z75KPRdQAQ

“These political protests are telling Scott Morrison that for too long our wages have stood still or gone backwards and too many families are struggling – it’s time to change this Government.

“Australia needs a pay rise. We will not sit back and let our living standards go backwards.”

A big group of unionists greeted @ScottMorrisonMP this morning in Launceston. Seems he’s travelling the country spending taxpayer money on an election he hasn’t called yet. We let him know the priorities of local workers – fair pay and secure jobs #politas #ChangeTheRules #auspol pic.twitter.com/vTicz8yiG8

Workers and Community members have gathered in the seat of Robertson to send a very loud message to the Federal Liberal Government – The rules are broken and our community is hurting because of them. We need to #ChangeTheGovernment to #ChangeTheRules 💪 pic.twitter.com/tEYEtM4HM9

It also came two days after vegan activists closed down one of Melbourne’s busiest intersections for several hours on Monday morning.

Police forcibly removed the protesters, and 39 have since been charged with various offences.