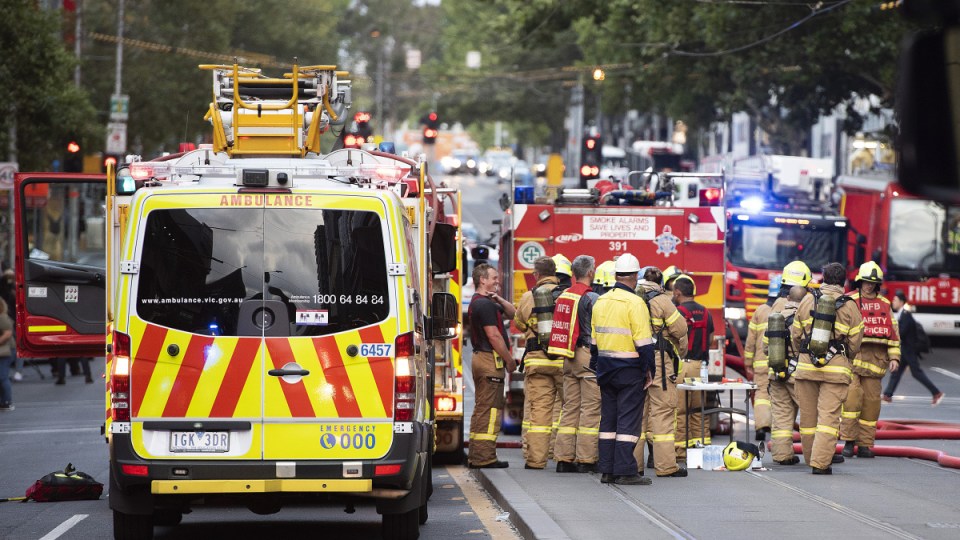 Extra fire fighters were deployed because of the cladding. Photo: AAP

Flammable cladding puts hundreds of buildings at a higher fire risk than the Melbourne apartment block that went up in flames on Monday, but the public still won’t be informed where they are in Victoria.

Every state and territory has spent years grappling with the issue, and the Fire Protection Association Australia (FPA) wants regulations to be enforced consistently nationwide.

“It’s a bit like Russian roulette for the average consumer in regards to whether they’re actually going to get a compliant outcome,” FPA deputy CEO Matthew Wright told The New Daily.

Residents of the Neo200 building on Spencer Street won’t be able to go home until Wednesday after it was evacuated about 5.45am on Monday.

The building has the same cladding as the Grenfell Tower in London, where 72 people died in a fire about 18 months ago.

Neo200 is only partially covered in cladding, which has not yet been found responsible for spreading the fire from level 22 to level 27.

The building had been deemed a moderate risk in an audit sparked by the 2014 fire at Melbourne’s Lacrosse tower.

There are 360 buildings in Victoria considered high risk, 60 of which are very high risk.

Just by Spencer street station .. I honestly hope whoever is in there gets out okay!! #melbourne #fire — you feel so helpless looking on but the fire engines are on their way. pic.twitter.com/jYGYqSc0Wb

Victorian Planning Minister Richard Wynne said owners corporations at high-risk buildings were informed and could tell potential buyers, but that information won’t be made public so the buildings did not become targets for arsonists.

Separately, about 40 state government-owned buildings have been deemed high risk. Another 100 are moderate risk and 100 are low risk.

“It is and has been a matter of life and death and it will be until we get rectification where it needs to be done,” former premier and co-chairman of the Victorian cladding taskforce Ted Baillieu said.

Mr Wright from FPA said all state and territories had made progress but all had responded to the cladding issue differently.

He said the National Construction Code needed to be implemented consistently across states and territories.

“It’s not about the code standards themselves … we don’t have it in terms of what licence do you need to do this role? When does this role stop and start? Who checks that that documentation is correct? How frequently are people randomly audited about their work? – there’s no consistency about those things at all,” Mr Wright said.

Planning ministers across the country will meet on Thursday and Friday.

In New South Wales, fire authorities have inspected 2495 buildings and found 447 buildings that could be high risk.

Fire & Rescue NSW has drawn up rapid-response plans in the event of fire for those high-risk buildings.

There have been 421 buildings referred to local councils as being high or low risk.

In Queensland, three public hospitals have been identified as having the combustible cladding including Princess Alexandra, Logan and Mackay hospitals.

If combustible cladding is found, owners need to engage a fire engineer. They then need to complete a fire safety risk assessment and fire engineer statement by May 2021.

More than 1400 buildings have been audited by the Victorian Building Authority (VBA), or 2000 in total including state-government owned buildings.

Sue Eddy, the chief executive of the Victorian Building Authority, said the rectification process was still in its early phase.

“In my understanding, I can account for one [building] that is at least nearly completed in terms of having its cladding replaced,” she said.

Mr Baillieu said it was a slow and complex process to find the affected buildings.

“The rectification is going to be a slower process because of all the interests involved, because of litigation that has been undertaken by all sorts of different parties,” Mr Bailieu told reporters.

Residents won’t be able to return to Neo200 until Wednesday after City of Melbourne’s Municipal Building Surveyor issued an emergency order, finding essential safety measures had been affected by the fire.

Melbourne Fire Brigade had dispatched extra resources because of the combustible cladding, and more than 80 firefighters brought the blaze under control in just over an hour.

One person was treated for smoke inhalation.

About 200 residents visited a relief centre at Melbourne Town Hall on Monday.

The VBA, City of Melbourne and MFB assessed the building in 2015 and found the cladding was dangerous.

Council issued a building notice and order notice to have risks addressed.