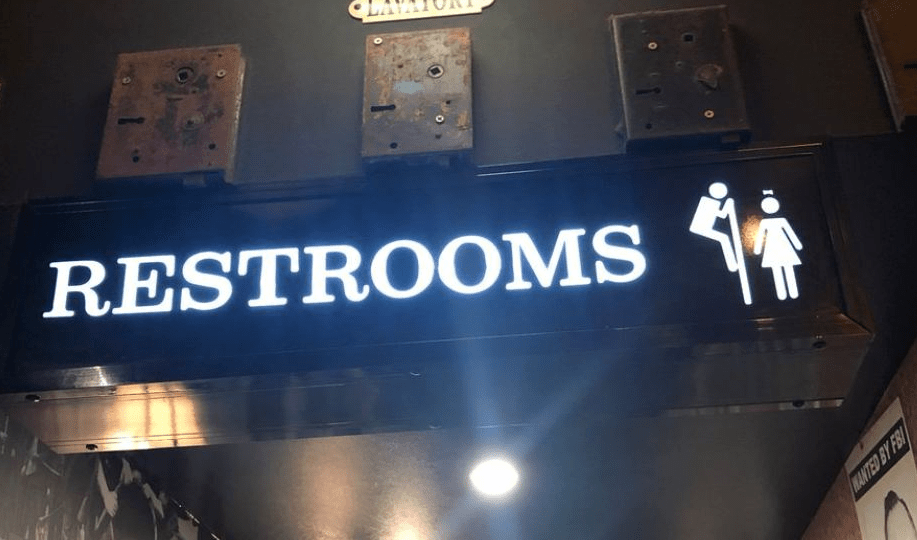 A popular Melbourne bar has been forced to apologise and remove a “sexist” sign depicting a man looking over a toilet cubicle at a woman, after receiving complaints.

The sign at Father’s Office bar, on Little Lonsdale Street, was taken down on Friday after a photo of it was criticised on social media.

“We apologise it has caused so much outrage. It was never our intention,” the tweet said.

Ursula Baehr went for a drink at the bar with a friend on Thursday and said the sign made her feel uncomfortable.

“I looked up and I was shocked,” she said. “It makes you feel disgusting to be in that place.”

Ms Baehr said she approached the manager who said the sign would be taken down after complaints.

She said the sign should not have been put up in the first place.

“Do they even think about the people who have experienced sexual harassment and how that makes them feel?,” Ms Baehr said.

“I just don’t know how something like that can be up in this day and age. It’s just not funny.”

No To Violence chief executive Jacqui Watt said the sign represented the “thin end of the wedge” when it came to disrespect towards women.

“You feel vulnerable that people might be peeking at you,” she said.

“It’s a message to men that this is OK, and this is funny, and that’s equally dangerous.”

She said attitudes towards women were important.

“People are realising the connection between gendered violence and bad attitudes, and if we can tackle bad attitudes we can hopefully reduce the violence,” Ms Watt said.

Can women pee in peace @FathersOfficeQV? Please and thank you 🙏

“Sexual harassment and assault in hospitality venues is off the chart,” she said.

“The last thing workers and patrons need is for venue owners to be putting up signs like these that appears to encourage that kind of behaviour.”

Last month, a Queensland fish and chip shop was labelled “out of step with community expectations” for its business’s name: The Battered Wife.